City Hall Building and its History

Construction of Winnipeg's First City Hall, located on Main Street between William and Market Avenues, began in 1875. For a city then undergoing modest but steady growth, the laying of the cornerstone in August of 1875 was greeted with a great sense of occasion. Local businesses declared the day a holiday and over 500 people were said to have witnessed the ceremony. Unfortunately, the building itself suffered from chronic structural problems forcing civic authorities to try to keep it standing through the use of props and beams. Their efforts came to naught and the building was eventually demolished in 1883. 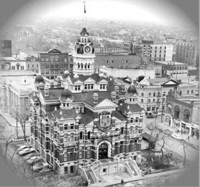 Even as the first one began to crumble, plans for a Second City Hall were already taking shape. Completed in 1886, the statuesque "Gingerbread" building complete with all manner of Victorian grandeur, symbolized Winnipeg's coming of age at the end of the nineteenth century. Yet it was not long before plans were being made for the construction of another City Hall as Winnipeg experienced exponential growth in the first decade of the twentieth century. Were it not for the onset of World War I, the "Gingerbread" City Hall would likely have been replaced. Instead, the building stood for another fifty years until its tower began to crumble. Falling plaster narrowly missed injuring City Hall visitors in 1958. In 1961, the tower had to be removed and the whole building was demolished in 1962. Though a product of another time and era, the second City Hall remains an enduring source of great civic pride. 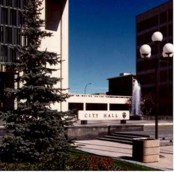 In its place, Council endorsed a proposal to construct a New City Hall modeled on the "Civic Centre" concept. The original plan called for the construction of two buildings - one for Council, the other for the Administration - separated by a courtyard but connected by an underground walkway. Shortly thereafter, the scope of the project was enlarged to include a Public Safety Building and Civic Parkade. Work began on the present City Hall in 1962 and was completed at a cost of $8.2 million. The complex was officially opened October 5, 1964.

On December 21, 1964 City Council awarded a contract for the construction of the new Public Safety Building and Civic Parkade on land directly west of the City Hall at a cost of $4.8 million. These buildings were completed in 1966. The Public Safety Building houses the headquarters of the Winnipeg Police Service and the Emergency Response Service. The parkade provides parking for 455 Automobiles on four levels above ground.