The Ambulance Department provided emergency medical services in the environment created by the flood which presented a new set of challenges, ones that were met by the creative use of existing resources and by forming partnerships with other agencies and departments. 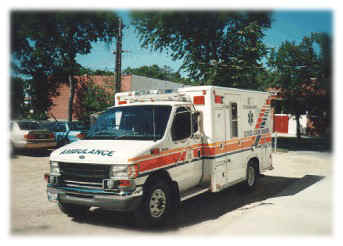 Being a land-based emergency response service, prior to the flood, Ambulance Department members had limited exposure to actively providing water and air-based pre-hospital care.

When it became obvious that the extent of the flood was going to be such that it would affect the department's ability to respond to certain areas of the city and its outskirts, a plan was developed and implemented so that advanced life support would still be provided to the patient, even if road access was unavailable.

A Level III Paramedic was assigned to a Fire Department water rescue boat on a 24 hour-a-day basis for the duration of the flood emergency. This made provision for those situations where advanced life support was required.

For other calls for service that required water access to the patient but where there was no immediate life-threat involved, arrangements made with the Harbour Master to furnish a boat at whatever land access point was required in order to transport the Paramedics to the patient, and then take everyone back to the ambulance.

As the river rose to levels that did not permit travel under bridges, the Harbour Master stationed boats on all segments of the river so that this could occur.

As is well known, the Canadian Armed Forces contributed greatly to the flood fighting efforts in Winnipeg and throughout southern Manitoba. With much of the Red River Valley covered by ’Lake Morris’, helicopters were the only means of rapid transport between the communities surrounded by the floodwater and the health care system in Winnipeg.

The military brought in a large number of helicopters, and at the height of the flood emergency had them in the air around Winnipeg 24 hours-a-day.

A plan was developed and implemented so that advanced life support
would still be provided to the patient, even if road access was unavailable.

Arrangements were made to have a helicopter meet an ambulance at the closest point of land access to a patient and fly the crew to wherever the patient was in the southern area of Winnipeg, and then take the patient to the Health Sciences Centre, where a specially-designated helipad was created at William and Tecumseh. From there, an ambulance would transport the patient to the emergency department.

For southern Manitoba, a Coast Guard pontoon-equipped helicopter was stationed in Morris to provide a means of medical evacuation for those essential personnel that were involved in flood fighting efforts. This helicopter landed at the Winnipeg International Airport, where an ambulance met it and took the patient to the hospital. Military helicopters from southern Manitoba that were not pontoon-equipped went directly to the Health Sciences Centre helipad.

As the water level rose in both the Red and Assiniboine Rivers, it flooded the basements and parking garages in a number of apartment buildings on the river banks. Because most mechanical services are located below ground level in these buildings, the flooding caused the residents to be evacuated. This presented its own set of problems, as the electrical power to the elevators was shut off due to the water.

The Ambulance Department staffed two special flood duty units through this emergency, and both were responded to all incidents of flood- related evacuations in order to assist the residents, some of whom were mobility-challenged, to be safely brought out of their suites and taken to the hospital, if required.

The spectre of the floodwaters overwhelming the dike system in Winnipeg was of particular concern to those hospitals and personal care homes that are located on the riverbanks.

In conjunction with Manitoba Health, a plan was developed that made provision to evacuate by ambulance over 1,200 patients from these facilities. Sixty ambulances from outside of Winnipeg were placed on standby to assist the City of Winnipeg Ambulance Department to move these patients to safety, if required.

A Special Operations Command Centre and a Communication Centre were established at Ambulance Headquarters, 2000 Portage Avenue, to command control this evacuation, which was designated ’Operation Evac’. Normal ambulance operation, would have continued unaffected, as all of the operational direction and communication would have been done apart from the day-to-day activities of the regular duty complement. Thankfully, ’Operation Evac’ did not have to be implemented. But the cooperative planning effort with Manitoba Health afforded an opportunity to develop a large-scale joint operational plan that is suitable for use for other situations, should the need arise.

The planning aspects of the Ambulance Department’s response to the ’Flood of the Century’ meant that the department was involved with the three levels of government, municipal, provincial and federal (military), as strategies were developed to meet the threat of the floodwaters. Daily City of Winnipeg Emergency Operations Centre(EOC) briefings focused on how the City and its personnel were responding to the ever-changing situation. The department worked closely with Manitoba Health to plan for the evacuation of threatened health care facilities, and also participated at the federal level in the planning of their response to the situation.

All-in-all, Ambulance Department staff worked long hours to insure that emergency medical services were provided to all of the citizens of Winnipeg, regardless if they were on dry land or surrounded by water. In addition, should the situation have deteriorated to the point that evacuations were necessary, the Ambulance Department was ready to do whatever was necessary to move the sick, the injured, the infirm and the elderly to safety.