How did we keep the public informed? 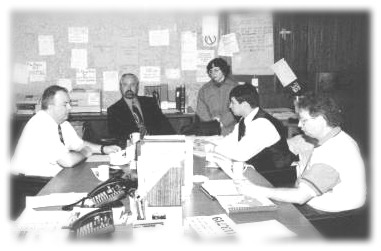 Staff in the Media Centre discuss
information to be released

It's not an exaggeration to say that it was a "BIG TEAM EFFORT"!

Our Emergency Public Information Team (EPIT), which was normally made up of 19 employees, grew to 299 employees at the peak of the flood emergency.

In any emergency, EPIT is responsible for informing the media and the public, handling public inquiries and making sure that media coverage is accurate.

Outside an emergency situation, EPIT members meet on a regular basis to plan and coordinate how the City will communicate in an emergency. The Team reports to its parent committee - the Emergency Preparedness and Coordination Committee.

If Winnipeggers had any questions about the flood; whether they needed sandbags or they wanted to volunteer, they called the City's Flood Hotline. And someone at the other end of the line had an answer. The Flood Hotline provided a critical link to the citizens of Winnipeg.

So, how do you get an Emergency Public Inquiry Call Centre, Flood Hotline, as the EPICC came to be known up and running in such a short period of time?

Members of EPIT worked to develop a call centre. In late 1996, EPIT had identified and provided an orientation to 120 potential call centre operators. 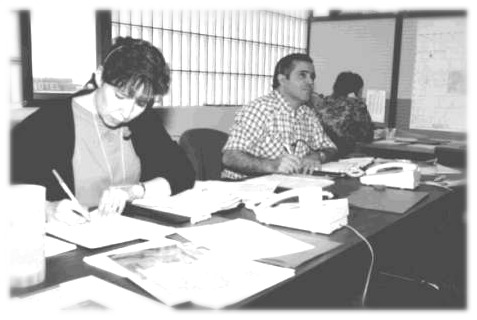 Staff at the Flood Hotline

In February and March 1997, the Flood Hotline was established on the 6th Floor of the Administration Building at City Hall.

When the Flood Hotline was activated, operators were given binders of information (yes, good old fashioned paper). Key phone numbers and information were updated regularly on large sheets of paper posted on the walls. Computers for the operators would have been ideal, but were not possible. One computer supported the entire Flood Hotline. But you can't have a call centre without staff. The key to the success of the Flood Hotline was definitely the 253 employees who answered call after call.

Between April 16 and May 20, staff answered 125,686 calls. On their busiest day, April 30, they answered 12,560 calls in a 24-hour period. There were up to 60 operators answering calls at any one time. Had the situation worsened, the Call Centre was even ready to take over the entire 6th floor of the Administration Building! EPIT worked with the Human Resources Division to coordinate the redeployment of staff to the Call Centre. The staff who agreed to the challenge did an outstanding job! Imagine having to talk to hundreds of people daily, about something that is changing constantly. At most, staff would get a 15-minute briefing at the start of their shift - and off they went to the never-ending ring of the telephone!

The Team had swung into action in 1996 when the Red River peaked at 19.4' James Avenue datum. To keep the public informed, we provided the media with up-to-date information on City preparations. We felt we did a reasonably good job.

But what could we do to improve our response? What if Winnipeg was hit by a larger scale emergency?

We decided to rewrite our Emergency Public Information Plan to reflect improvements to our systems. Within that plan, we developed the Emergency Public Inquiry Call Centre. Little did we know what an important role the call centre would play.

How do you provide information to 650,000 people on very short notice? By working WITH the media. And the Emergency Public Information Plan called for just that.

The Media Centre was first set up in the Emergency Program Office, but it soon outgrew its space and moved to the North Committee Room on the 2nd floor of the Council Building.

It was there that 39 staff members worked 7 days a week (and sometimes 24 hours a day):

Media called from around the world - Australia, Germany, Great Britain, United States. Both CBC and CTV broadcast live across Canada during the height of the emergency. And the local media provided continuous coverage. 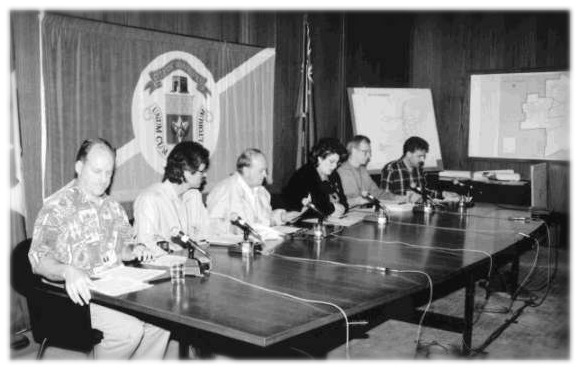 But EPIT went even one step further in emergency public information - they formed a partnership with Videon and Shaw Cable TV to set up "The Flood Channel", a strong commitment to the community. Searching for a more direct way to provide information to the public, EPIT's coordinator, Eric Turner, called both cable companies. Videon and Shaw responded by offering to broadcast flood information 24 hours a day on Cable Channel 11.

And the rest is history...

Most Winnipeggers tuned into Channel 11 for most up-to-date and accurate flood information.

Winnipeg's cable companies recorded the highest viewer ratings of all local TV stations during the last week of April - an accomplishment unheard of in the Canadian Cable TV industry!

Another EPIT initiative was the Food and Wellness Committee. This seven-member team provided an invaluable service for all the staff in the area of public information.

It was in the midst of the flood emergency that EPIT welcomed a special visitor - Jim Stanton, who taught the Emergency Public Information course for the Canadian Emergency Preparedness College.

Jim had high praise for the work being done, and wrote to the Team: "you folks really set the standard for how to do things in a crisis". High praise indeed for a job well done!