Here comes the flood . . . of requests for information technology!

Each day technology continues to spread into every sphere of our lives. From driving, to banking, to health care and the service industry, computers play a role in our day to day activities. Information technology also played a large part in the City's flood disaster management efforts. 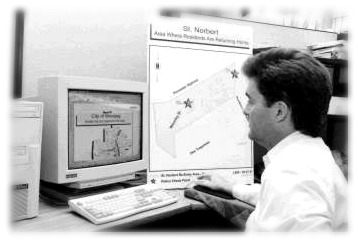 Where Support Was Provided

Information systems and technology staff provided experience in call centre technology, database, system integration, geographic information systems (computer mapping), and telephone systems. All of these resources were mobilized, when the flood waters began to rise in the City.

In order to deal with the demands from the public for information and to assist in the coordination of volunteer sandbaggers, a Flood Call Centre was established on the 6th floor of City Hall. Telephones were set up, originally 15 and then increased to 60. Space occupied by the call centre also increased into offices and cubicles.

The City's home page on the Internet was modified on April 18, 1997 to create a flood information page. It was hoped that this would reduce the number of calls coming to the Call Centre and provide timely information on the flood. Prior to the flood, the average number of "hits’ on the home page was about 200 per day. On May 1 the flood page received 14,812 hits and between April 17 to May 7, there were 123,024 hits.

Information such as sandbagging locations for volunteers; the latest press releases; information on the prevention of basement flooding; evacuee information; fund raising information; and maps of the primary dike system and re-entry area maps, etc. were placed on the Internet. A file was created with current volunteer locations and flood information which was scanned every five minutes, transmitted to the University of Manitoba, our Internet service provider, and placed on the flood page.

A considerable amount of effort went into ensuring that the list of evacuees was current and accurate. Because the evacuations were occurring very rapidly, information was being tracked on paper lists located at various sites. A copy of the Evacuees who registered was obtained from the Red Cross (in digital form) and merged with the City’s list.

The evacuated property list was also used extensively to produce a variety of maps showing the re-entry process. These maps were used by the Emergency Public Information Team to provide information to the Call Centre, the media, various City departments and agencies such as Centra Gas, Manitoba Telephone System, to coordinate the evacuation and re-entry process. 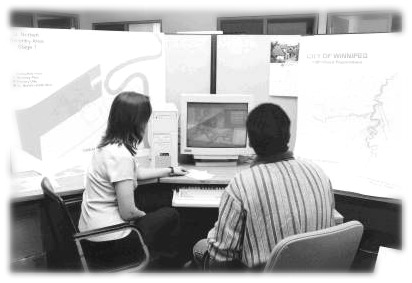 The demand for current flood information displayed on maps escalated at the end of April when the flood peak arrived. Experienced staff in computer mapping and graphic presentation were brought in from various departments to assist in the mapping effort.

An elevation map was created using the elevations of sewer manholes. The elevation database, and a property database was made accessible on-line to the Emergency Operations Centre (EOC) using an Intranet application. In addition, an LBIS workstation with access to water and sewer data was set up in the EOC.

The Province of Manitoba, the Military and City departments participated in an exercise to prepare evacuation plans if required. Maps and information on property counts, dwelling unit counts and population estimates and list of property owners in the evacuated areas within the area bounded by the primary dike system were supplied.

Multiple computer systems information was required throughout the organization. Information gathered from Water & Waste, Streets & Transportation and the Call Centre had to be coordinated into one database. Information was also acquired from a variety of sources, both internal and external to the organization. Demands for information ranged from the Emergency Public Information Team (EPIT), Emergency Operations Centre (EOC), the Flood Call Centre, the Military, Centra Gas, Manitoba Telephone System, Manitoba Hydro, and various City departments.