The Role of the Public Works sector was, as much as possible, to protect properties within the City of Winnipeg from flooding. 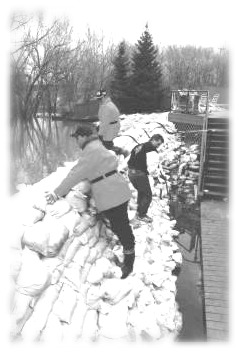 The Streets & Transportation Department ensured adequate materials and resources were available for sandbagging. Four sandbagging machines produced sandbags for dikes. Large piles of sandbags were also stored in various locations throughout the City in case they were required to repair dikes. City crews and volunteers filled 6.6 million sandbags Public Works responsibility also included delivery of the filled sandbags to locations where they were needed, supplying equipment like front-end loaders to move the sandbags at diking locations and building earth dikes. The City also provided approximately 20,000 filled bags and 150,000 unfilled bags to the Grande Pointe area, south of Winnipeg.

If the 6.6 million sandbags filled to date were set down end to end, they would stretch roughly from Winnipeg to Vancouver.

The City prepared for the worst, including leaking dikes and dike failures, and the possibility that the City could be hit by a heavy rainfall. Public Works coordinated the construction of dikes (earth and sandbag) in the flood stricken areas. This required raising dikes to a point two feet higher than the highest forecast river levels. The additional height built into the dikes is called freeboard, and it gave the City a margin of safety. Engineers and surveyors worked around the clock with computer modeling and site surveying to determine the best location for dikes.

Dikes in the south end of the city were raised. South of the floodway, earth and sandbagdikes were raised substantially. Throughout the city, the Primary Diking System was upgraded to a minimum level of 26.5' James. Work was concentrated on Kilkenny, Tache, Higgins, and Whellams Lane. A Primary dike behind the St. Boniface Hospital was also reinforced. 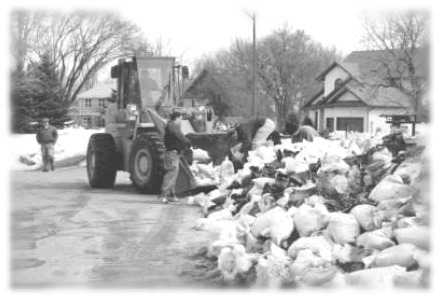 Plans called for around the clock inspection of all permanent and temporary dikes, including checking for leaks and putting pumps in place to pump seepage back into the river. Dike patrol teams were assembled from various city departments. Before the river crested, 33 two-person teams patrolled and monitored dikes on a 24 hour basis. The day of the crest, May 1, seventy teams of dike patrols monitored the dikes. Each team was made up of two city employees plus one or two citizens. All dike monitors wore orange PFD's (personal flotation devices). The dike monitoring teams were supported by survey crews and geotechnical engineers who were on call to respond to any dike concerns. The ring dikes (properties with dikes completely surrounding them) were monitored every couple of hours. This activity was coordinated by the Harbourmaster. The military was also involved in dike monitoring. The dike patrols: City staff, military and volunteers, backed up by teams of sandbaggers and engineers looked for anything from minor seepage to major dike breeches. 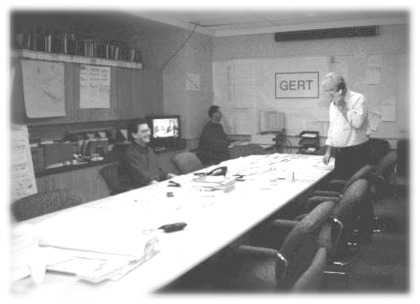 The Geotechnical Response Team (GERT) focused on riverbank stabilization, how to maintain the riverbanks with the least damage and identifying the need to remove the sandbags to prevent erosion and collapse of riverbanks. Geotechnical engineers were on call 24 hours a day and well prepared to respond quickly to all dike related concerns.

The clean-up was a massive job! Planning teams were formed to determine how to remove the 6.6 million sandbags stacked up along the city's rivers. The dikes had to be removed to prevent collapse of the riverbanks when the water levels dropped.

Where did all the sandbags go?

The public helped themselves to many, many sandbags (and we're pleased they did). The sand was used in home projects like sidewalk, patio and driveway construction and in gardens. The remaining bags were disposed of either at the landfill site or on private property with the permission of the owners.