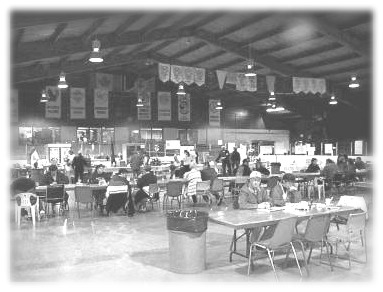 The City of Winnipeg Social Services Department and the Community Services Department actively planned, prepared for and participated in the evacuation of thousands of people from the Red River Valley and the City of Winnipeg. The primary activities included the registration, feeding, clothing, shelter, personal services and health services for more than 20,000 evacuees.

The key partners that assisted in the delivery of Emergency Health and Social Services were City of Winnipeg Parks and Recreation (facilities and equipment), Red Cross (registration and inquiry staff), Salvation Army (food), Provincial Health and Family Services (housing and personal services). In addition numerous volunteer organizations such as the United Way, Age & Opportunity Centre, Klinic and Meals on Wheels provided assistance when needed. 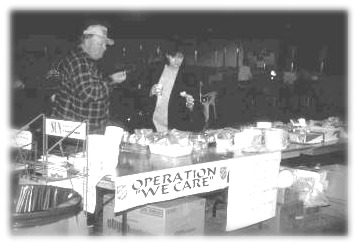 On April 22, the St. Vital Centennial Arena was set up as a reception centre where evacuees were registered and provided with food, accommodation, personal services such as counseling and public health information.

The Parks and Recreation Department set up a recreation area (play centre) in the St. Vital Arena for children of flood evacuees. Numerous games and toys were donated by many organizations and individuals.

While a majority of evacuees stayed with family and friends during the emergency, others were assisted with temporary housing. City staff arranged some billets with private families and negotiated special rates with local hotels and residences. More than 400 rooms at local hotels as well as several hundred private rooms and dorms at the University of Manitoba, Concord College, St. Benedicts Monastery, and the Canadian Mennonite Bible College were used to house flood evacuees. Other congregate facilities were set up with cots and other supplies in the event they were needed.

As the floodwaters rose in the City several apartment blocks along the Red and Assiniboine Rivers experienced basement flooding and the power had to be cut off. Social Services staff worked with Fire, Police and other officials to safely evacuate elderly residents from the affected buildings.

Public Health Nurses from the Neighborhood Nursing & Health Services and Neighborhood Resource & Community Health Centres Divisions assisted evacuees with their health related concerns and followed up with home visits and phone calls. At the peak phase of the Reception Centre operation, Public Health Nurses from the Winnipeg Region of Manitoba Health worked jointly with Community Services in the provision of nursing services.

When the evacuees’ were returning home, Public Health Nurses and Environmental Health Officers addressed issues related to safety of the water supply, clean-up of flood damage and management of sewer backup.

The reception centre acted as a location for people to drop-off and pick-up water bottles for testing their well water upon returning home. The officers collected and delivered the bottles to the lab and provided the necessary information results to the people.

A public inquiry and a Province wide 1- 800 line was operated in collaboration with Manitoba Health. Any health inquiries were referred to this line. Information on health related matters to the public was provided through local television and newspaper. Over 300 media related contacts were made by the Environmental Health Officers. In collaboration with the Province of Manitoba, Community Services also developed information fact sheets for the public.

A Command Centre was set up at 280 William for coordinating health related activities with Internal Services – Employee Occupational Health & Safety Division, Social Services, Water & Waste, Manitoba Health, Emergency Measures Organization, etc., other City departments and the Province. They met on a daily basis to consider the significant factors that were critical in planning for the health and safety of the community by working closely with each other.

During the Flood of 1997, the Parks and Recreation Department set up an art and crafts centre at the St. Vital Arena to keep children occupied while their parents registered as flood evacuees and obtained food and shelter for their families.

Fortunately, the recreation staff who took charge of the center quickly realized that what was needed was beyond art, crafts and recreation activities. Many children had come to the centre without any toys, games or even (in some cases), clothes. Ensuring these children received the emotional support they needed was the real challenge facing the recreation staff.

Trained recreation volunteers were brought in to assist, and worked four hour shifts to cover up to 16 hours per day over a six week period. The Parks and Recreation Department provided a high 10’ by 10’ play structure. St. Vital School Division and the Children’s Hospital provided children’s books and magazines. Games and toys were donated by many organizations, churches and individuals. 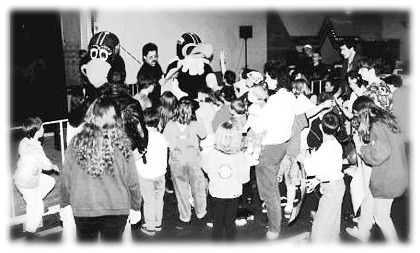 Children were soon playing video games and basketball, creating arts and crafts and enjoying the play structure. Many children’s entertainers dropped by to sculpt balloons, paint faces and entertain at the arena. In addition local entertainers such as Fred Penner and Al Simmons put on four family events for the flood evacuees at various hotels throughout the City.

Recreation volunteers and staff at the area became the child’s "buddy" for the day and often for the weeks that followed as children returned to the site to have a place to play. Children adopted a toy, game and/or a book to keep or, as the weeks went on, to exchange for other toys.

Play is such a good icebreaker that the children and parents grew to know and trust the staff and volunteers. The families shared many touching stories with them. Recreation staff were able to identify the family's needs, and social workers, nurses and support staff were brought in to give immediate assistance to the families. All who contributed to the great success of this centre deserve a great deal of thanks, and they in turn were appreciative of the opportunity to help the children flood victims of '97.