Update October 2018: Thank you to everyone who provided feedback during development of Winnipeg’s Climate Action Plan. The Plan received unanimous support from Council on September 20, 2018 and the Plan was approved for implementation.

Recognizing that climate change is a serious global environmental problem, the City of Winnipeg developed a community climate action plan, an initiative called Winnipeg’s  Climate Action Plan: Planning for Climate Change. Acting for People. The City built on the technical work already completed in Winnipeg’s 2011 Community Greenhouse Gas Inventory and Forecast (2015) by focusing on long-term goals achieved through a series of short-term actions. This Plan addresses the community’s challenges and opportunities with respect to global climate change, offers new targets for emissions reductions, and provides recommendations for new and enhanced policies, programs and actions.

Thank you to everyone who provided feedback during the development of Winnipeg’s Climate Action Plan. Feedback from the public engagement process was incorporated into Winnipeg’s Climate Action Plan. A copy of the Plan, which has been approved by Council , is available in the 'Documents' tab, along with submissions received from delegations during the public hearing process.

From November 2017 through February 2018, stakeholders were invited to provide input into the development of Winnipeg’s Climate Action Plan in two phases. The intent of Phase 1 engagement was to create a climate vision for the City, introduce target-setting, and develop the climate actions that can be taken at the community level.

Phase 2 included a Public Priorities Workshop. The intent of this phase was to seek more in-depth community input on the topics identified during Phase 1. Attendees joined facilitated discussion groups and were asked to record their input in workbooks. Participants were also asked to engage in a ‘Dotmocracy’ exercise that solicited further perspective on public priorities.

We reached nearly 4,800 stakeholders through the engagement process and as a result, we received more than one hundred questions and comments in addition to a large volume of input provided via event workbooks. This includes 4,674 people who were reached through online engagement, 69 who participated in-person at the kick-off event, and 56 people who attended the Public Priorities Workshop.

A summary report of the feedback received throughout the project is available. In addition, the following public engagement reports are available with details on what we heard: 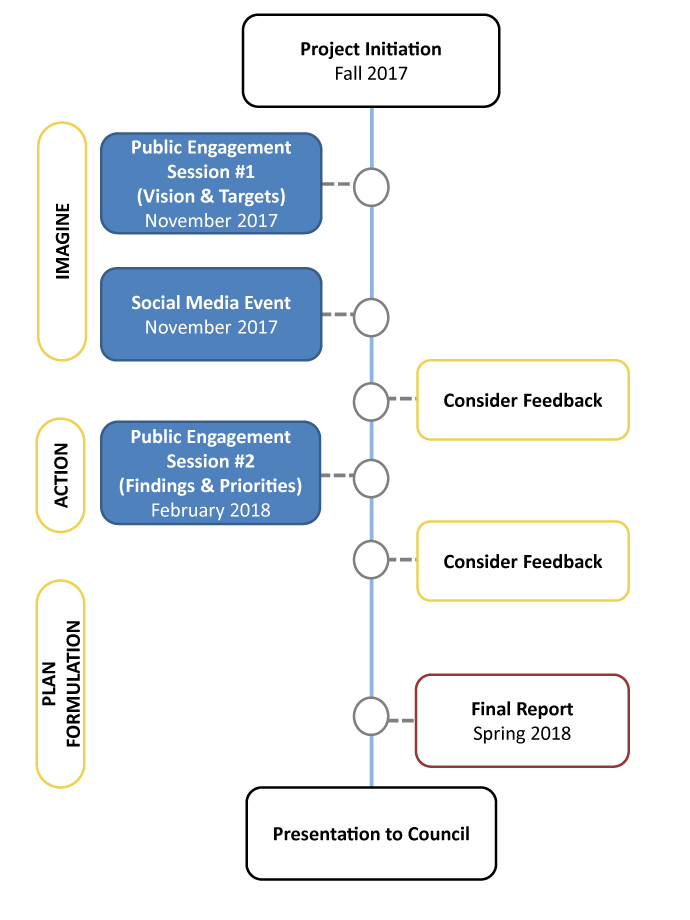 Climate change is recognized as one of the most serious global environmental problems and results from an accumulation of atmospheric greenhouse gases (GHG). On November 25, 1998, recognizing the importance of dealing with climate change, the City of Winnipeg committed to the Federation of Canadian Municipalities (FCM) Partners for Climate Protection (PCP) program.

The PCP program is a network of Canadian municipal governments that has committed to reducing greenhouse gases and acting on climate change. It empowers individual municipalities to take action against climate change through a five-milestone process that guides members in creating GHG inventories, setting realistic and achievable GHG reduction targets, developing local action plans, and implementing plans using specific, measurable actions to reduce emissions. The City was awarded a Federation of Canadian Municipalities Green Municipal Fund grant to complete this action plan.

The City’s commitment to reduce GHG emissions is also recognized in A Sustainable Winnipeg, the City’s guiding sustainability strategy and a supporting document to the City’s OurWinnipeg community plan.

In 2015, Mayor Brian Bowman reiterated the commitment to action on climate change by endorsing the Big City Mayors’ Climate Change Action resolution that committed the City to:

In November 2016, the Winnipeg 2011 Community Greenhouse Gas Inventory and Forecast report was presented to Council. The report updated the community-wide GHG emission inventory from 1998, reported on three emission forecast scenarios for the year 2050, and an emissions reduction opportunities assessment.

The City’s commitment to the development of a climate change action plan has evolved through the commitments and initiatives described above. Winnipeg’s Climate Action Plan was developed with a number of opportunities for community input and the outcomes included:

The public engagement process for this project was designed to provide a number of opportunities for involvement and to inspire dialogue and participation using creative methods. The views and input of Winnipeg residents were incorporated into the development of Winnipeg’s Climate Action Plan. Feedback from the public engagement process was incorporated into the Plan recommendations wherever possible, and was included in the final report.

What is climate mitigation?

Actions which reduce or prevent the emission of atmospheric greenhouse gasses.

What is climate adaptation and how does it fit in to this planning process?

Climate adaptation refers to actions that help communities or ecosystems cope with changing climate conditions, e.g. flood protection measures. Although the focus of the Plan was on reducing the city’s contribution to climate change by reducing greenhouse gas emissions, the next steps will include dedicated efforts to prepare for a changing climate and the associated risks. There are a number of co-benefits and synergies between climate mitigation and climate adaptation efforts and with Council’s recent approval of Winnipeg’s Climate Action Plan, we look forward to advancing work in both of these areas.

Do we have a community GHG reduction target?

The Plan includes renewed greenhouse gas emission reduction targets that support the community’s vision and reflect the science of climate change mitigation – both what is possible, and what is necessary to avoid catastrophic impacts associated with climate change. The renewed targets include:

Sector-specific targets (for 2030) are also described in the Plan.

Are there opportunities for members of the community to get involved going forward?

The public engagement program for Winnipeg’s Climate Action Plan has finished. The City will continue to work with local organizations and community experts as we refine and implement the actions outlined in the Plan.

The Plan outlines the City of Winnipeg and the broader community’s commitment to work together. It provides a framework to proactively, meaningfully and effectively mitigate climate change by reducing greenhouse gas emissions. In doing so, the City can also:

How did the project team decide which climate actions to include as part of Winnipeg’s Climate Action Plan?

The climate actions were developed through careful consideration of feedback from the public engagement sessions, inputs from the Climate Action Advisory Group, City staff, as well as best practices from other jurisdictions. Past climate planning efforts, such as the City of Winnipeg Community 2011 GHG Inventory and Forecast (2015) and OurWinnipeg have also helped to inform efforts.

What sectors are covered in the Plan?

The community sectors that are included will help inform the development of the Plan are based on Winnipeg's Community 2011 GHG Inventory and Forecast report. The energy and GHG inventory in this report includes the following five sectors and activities:

Action and priorities were identified for all sectors. However, the sectors that represent the largest source of emissions are also the greatest opportunity for GHG reductions and these include:

Do other cities have community climate change action plans?

Yes. Most similarly-sized Canadian cities, and nearly all large cities around the world, have either adopted or have committed to adopting stand-alone or policy-integrated goals, targets, and action plans.

The City has invited a diverse and collaborative group of climate experts and stakeholders to help inform the development of a community climate vision, targets and climate action plan.

The group will consist of stakeholders and technical experts representing government, industry, business, community organizations, and non-profit agencies. We will to draw on their expertise to help draft the Plan’s vision and targets, and to identify and test out climate action ideas. Members will be asked to collaborate in small groups to identify implementation guidelines around several key programs or policies. This work will involve a broad range of stakeholders thinking through how to establish programs that can be tested and rolled out in the City.