Out of a mire of Red River mud and challenged by a burgeoning population, Winnipeg grew quickly to become The Chicago of the North, The Gateway to the West...

With a View to the Future

Winnipeg’s first citizens were an optimistic lot, apparently oblivious to the mud and want described by the Reverend George YoungGeorge Young was an itinerant preacher for the Methodist Church. He received a mission at Red River and arrived in 1868. After working in various settlements around the fledgling city, he settled in Winnipeg and remained for eight years. Young retired to Toronto where he died in 1910. He is the author of Manitoba Memories: Being Leaves From My Life in the Prairie Province. (Toronto, 1897). Young’s description of the settlement circa 1868 reads: "What a sorry sight was presented by that long-thought-of-town of Winnipeg on the day we entered it! What a mass of soft, black, slippery and sticky Red River mud was everywhere spread out before us! Streets with neither sidewalks nor crossings, with now and again a good sized pit of mire for the traveler to avoid or flounder through as best he could; a few small stores with poor goods and high prices; one little tavern where 'Dutch George' was 'monarch of all his survey'; a few passable dwellings with no 'rooms to let', nor space for boarders; neither church nor school in sight or in prospect; a population about one hundred instead of one thousand as we expected – such was Winnipeg on July 4, 1868."

X Close when he arrived at the site of the future city in 1868. When construction began on Winnipeg's first city hall in 1875, City Council declared a half day public holiday, and with full MasonicThe masons or freemasons are a worldwide fraternal organization whose members believe in a specific set of moral and ethical ideals. The internal workings of the masons are typically secret.

X Close of documents and artifacts into the cornerstone of the new building. 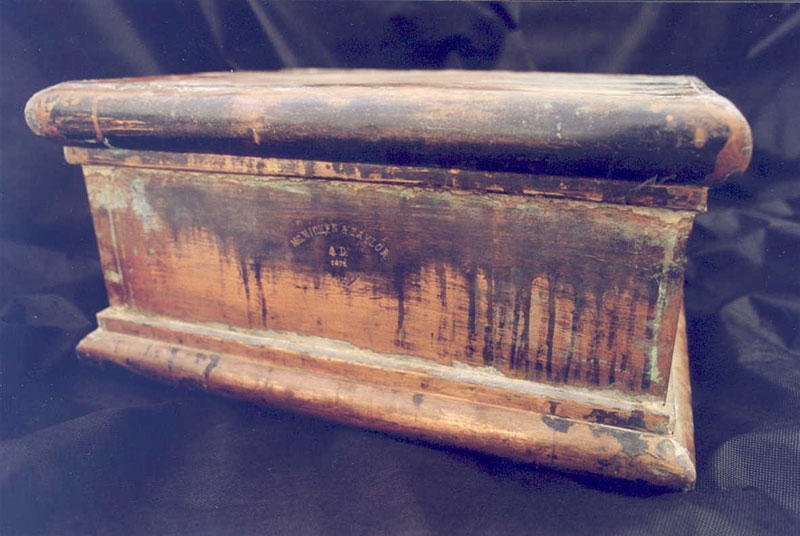 Winnipeg’s population grew substantially during its first fifty years. Following completion of the first property assessment in June of 1874, the City Assessors reported a resident population of just 1,869 persons. By 1924, the City had grown to accommodate a population of 194,850.

While a sign of prosperity on the one hand, rapid growth brought with it a tide of lawlessness, disease and competing interests for development of the new city. 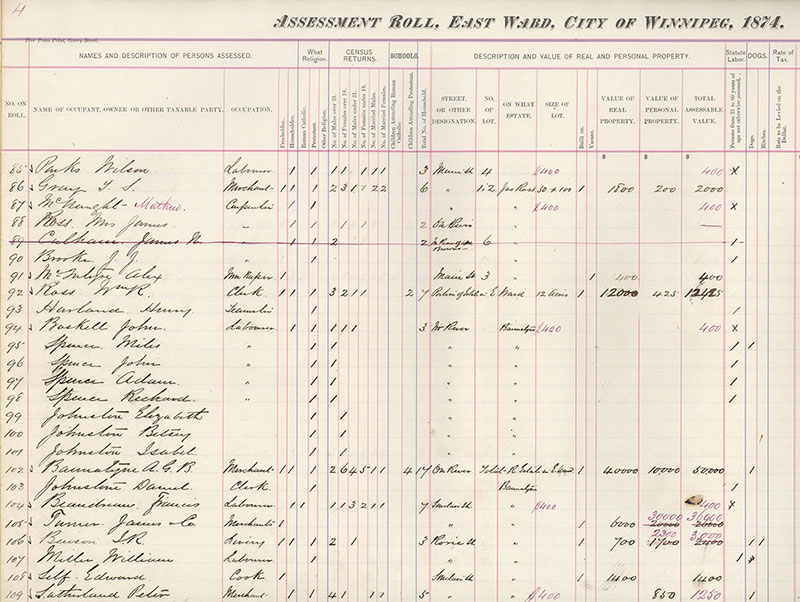 Given its frontier character and the tendency of citizens to engage in boisterous debate, one of the first positions created by Winnipeg’s newly elected Council was Chief of Police. John S. Ingram, the City’s first Chief of Police, was appointed in February of 1874. However, amid controversy over his failure to control the City’s houses of ill fame, Ingram resigned in July of 1875 and was replaced by D. B. Murray, a policeman on the force. Shortly after his appointment, Murray recommended that the force be increased to five officers to enable night patrols. 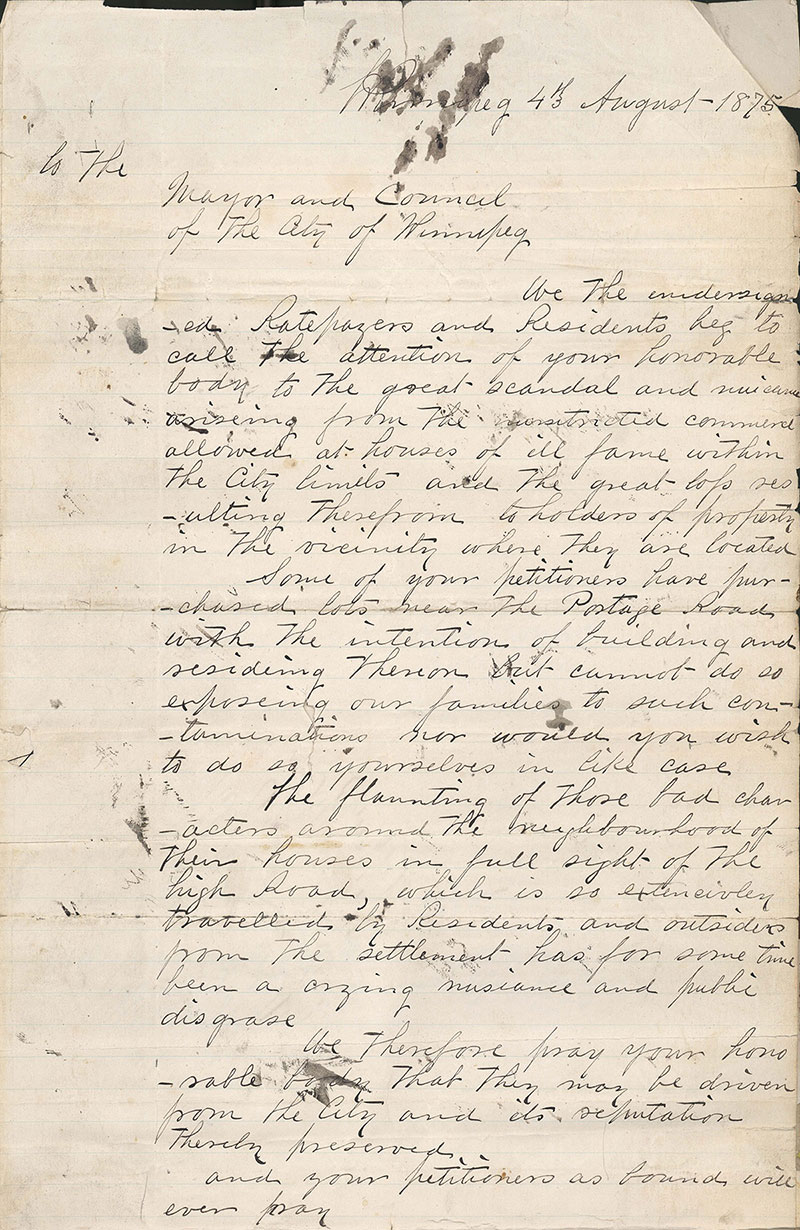 Many of Winnipeg's early buildings were constructed of wood, and therefore vulnerable to fire. Wherever fire struck, it was devastating to the City and made headlines across the country.

The City obtained its first fire engine in 1874, but relied on volunteers until a full-time fire brigade was formed in 1881. 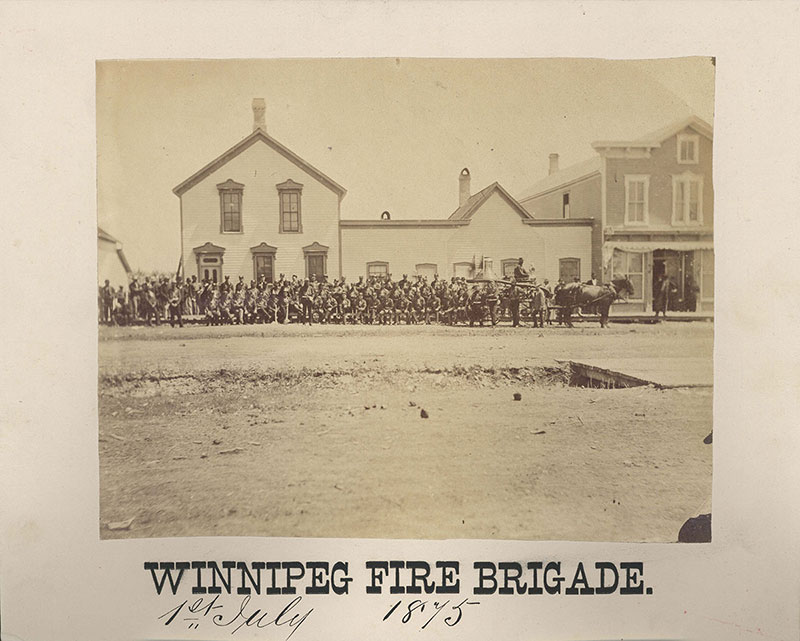 Water quality and supply was a continuing issue. In 1912, the Public Utilities Commissioner ordered an investigation which led to a recommendation that the City use Shoal Lake as its water source. Construction of the aqueduct began in March of 1914. In April of 1919, the Greater Winnipeg Aqueduct was completed and soft water from Shoal Lake was piped into Winnipeg.

X Close was completed and water from Shoal Lake began to flow into the City, securing safe, clean water for the City was a major concern for City Council. At first, water was delivered using horse-drawn carts. By 1882, the Winnipeg Water Works Company was distributing water drawn from the Assiniboine River via six miles of water mains. However, water quality was suspect and linked to the City’s annual fight with Typhoid and other communicable diseases.

Although the aqueduct solved Winnipeg's water troubles, its construction required the use of Shoal Lake 40 First Nation reserve land. Through clauses in the Indian Act, the land was purchased from the Department of Indian Affairs. In order to divert cloudy water away from the aqueduct's intake, a channel was dug between Falcon River and Snowshoe Bay. The channel cut off a large part of the reserve from the mainland. The loss of reserve land and construction of the channel had economic as well as many untold human consequences for the community of Shoal Lake 40. 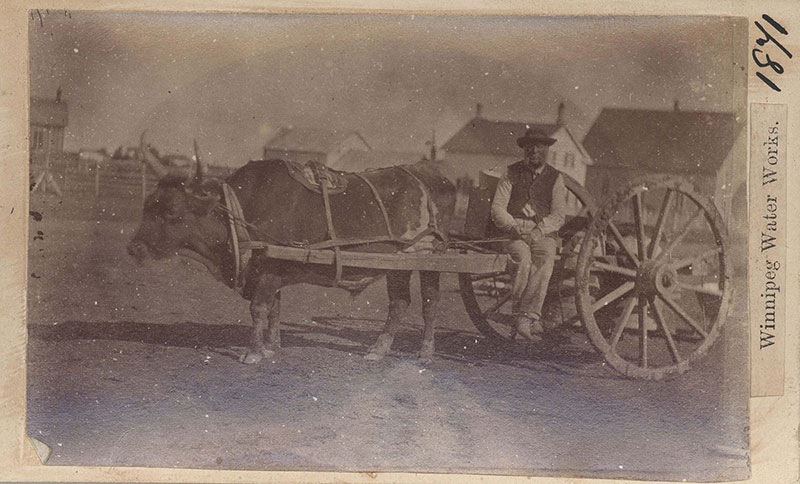 Located at the intersection of the Red and Assiniboine rivers, Winnipeg’s potential for growth was limited…unless the rivers could be crossed. Lobbying efforts by Council and businessmen alike culminated in construction of the Louise Bridge, which brought the Canadian Pacific Railway Syndicate to Winnipeg in the early 1880’s.

While major construction projects like the Louise BridgeConstruction of the Louise Bridge, so named for Queen Victoria’s daughter and the wife of Canada’s governor general, Princess Louise Caroline Alberta (1848-1939), began in 1880 with the laying of a cornerstone on August 9. The bridge was constructed by the City for the use of the CPR (Canadian Pacific Railway). In 1911, the bridge was rebuilt and was no longer used by the railway. The original stone masonry piers from 1881 remain.

X Close established the City's position as a transportation center, Winnipeg's citizens were faced with traversing numerous smaller creeks and ravines. These concerns were brought to the attention of City Council through letters and petitions. 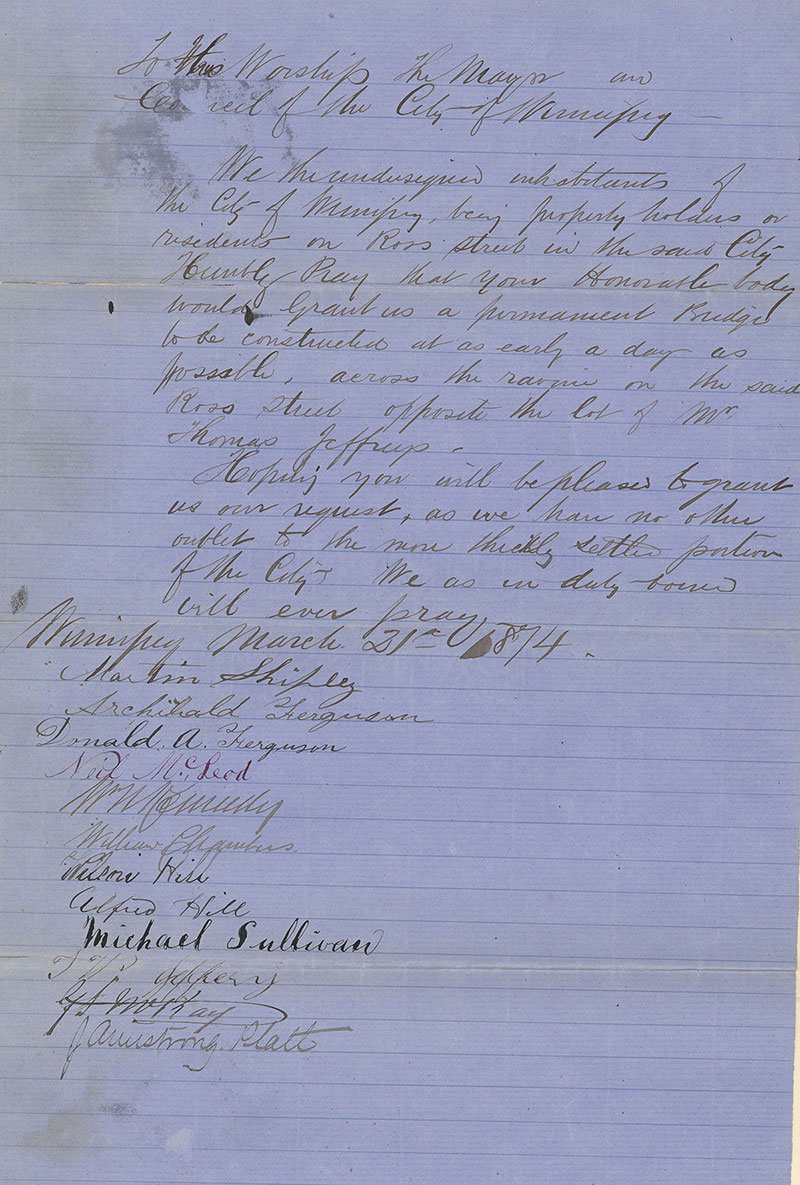 Main Street and Portage Avenue, Winnipeg’s premier streets, began as routes for the famed Red River cart. Because cart wheels were so hard on the roads, the road allowance was sufficiently wide to allow for several paths along which the carts could travel, should one become too deeply rutted or the mud so mired as to block passage.

By 1909, Winnipeg boasted that its major streets were "spendidly wide and smoothly laid in asphalt pavement, with granolithicGranolithic was a kind of hard, artificial stone, used for pavements.

X Close sidewalks proportionate to the width of the carriage and traffic ways." 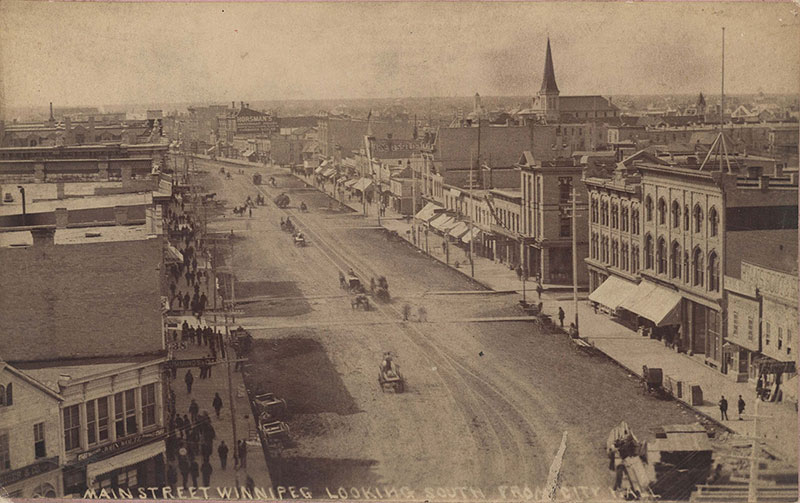 Given Winnipeg’s renowned mud, sidewalks were of particular concern to City residents. In 1893, Council received a letter requesting repairs to the sidewalk on Lizzie Street between Logan and Henry, being that it was “over the boots in mud.”

Annual reports for the City consistently include a “Miles of Sidewalk” added statistic. In 1912, 349 miles of plank and 99 miles of granolithicGranolithic was a kind of hard, artificial stone, used for pavements.

X Close sidewalk were added. Through the 1920’s, the use of wooden planking for sidewalk construction declined in favour of more permanent results achieved using paving materials. 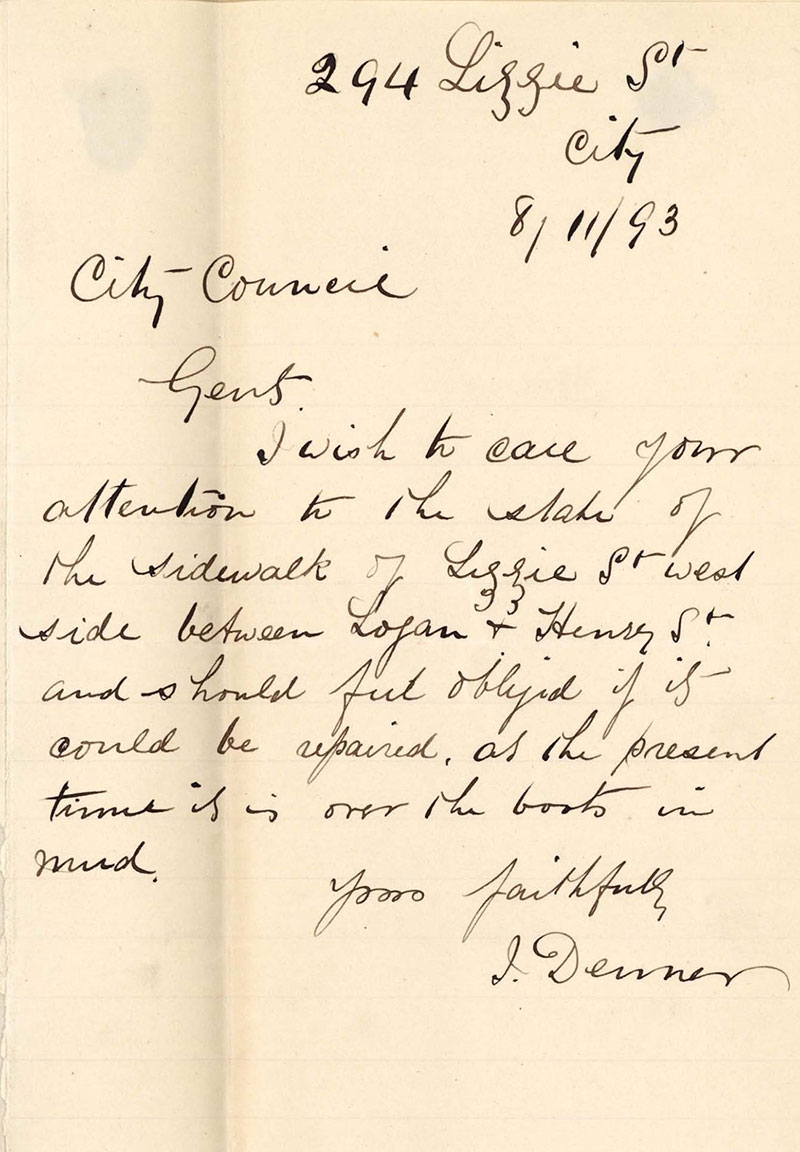 In a 1909 promotional publication issued by the City of Winnipeg, the aesthetic appeal of the City is described for the benefit of businessmen who might be considering a move to the Gateway to the West. Of particular note were the City’s residential streets, which were “boulevarded and have rows of trees on either side with asphalt pavements and granolithic walks, the whole giving a clean and pleasant appearance.” Because of its shape, the elm was the tree of choice for boulevarding. 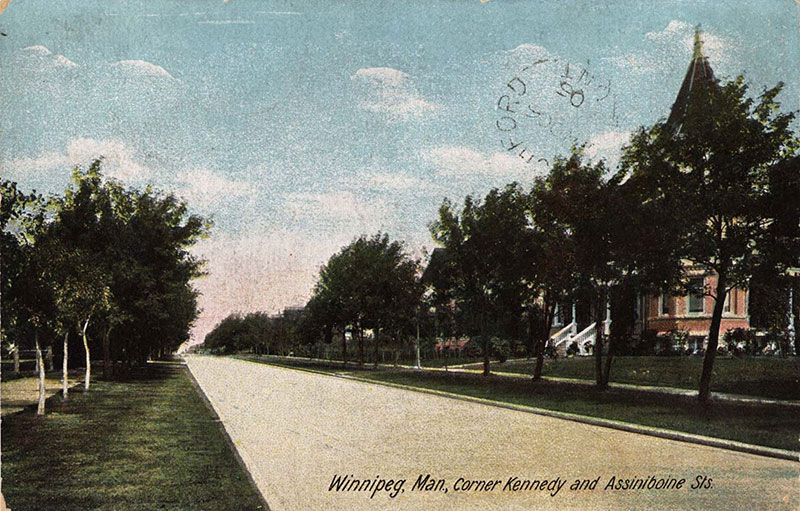 Before cars, buses, streetcars and trolleys, people walked to work and other destinations. Hence, development was concentrated close to the center of the City. In 1882, a horse-car service was introduced. In 1892, Winnipeg’s first electric street car, run by the Winnipeg Electric Street Railway Company, began to offer service. The company operated under a franchise from the City. 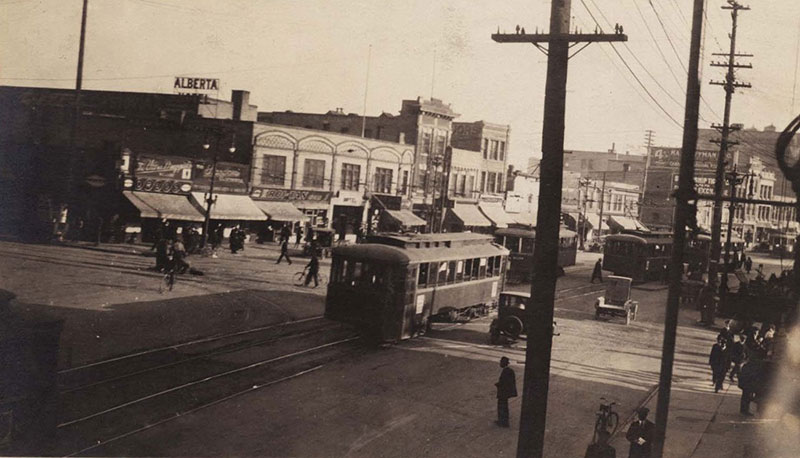 In the early years of the twentieth century, public health was a major concern in growing cities. In Winnipeg, the Committee on Public Health dealt with “nuisances, sources of filth, sickness caused by unhealthy premises, contagious diseases and epidemics”. Licensing, regulation, inspection and public education were used to combat some of the City’s worst ills. 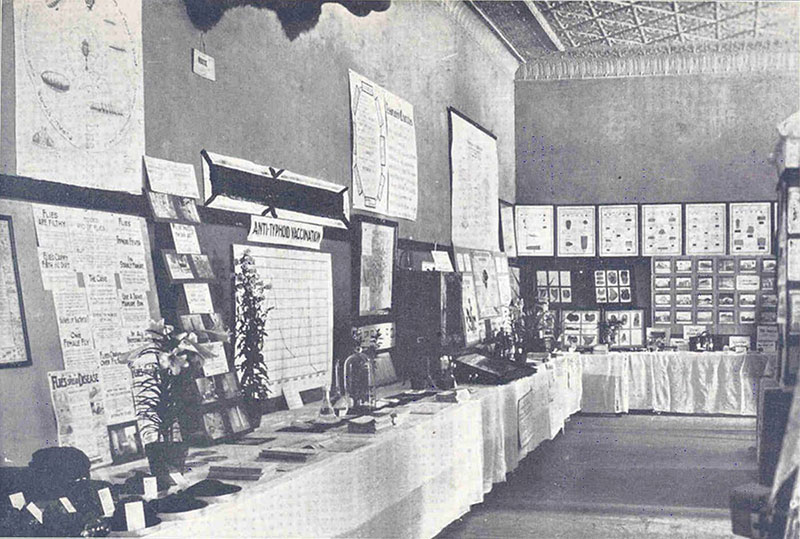 Issues around sanitation very quickly came before City Council. Early on, scavengers were hired to remove solid waste, such as the dead horse William Ashdown brought to the attention of Council in March of 1874. The City’s first sewer system was constructed in 1876. By 1906, the City was actively engaged in connecting sewer and water mains and in the removal of box closets Box closets, outhouses with wooden boxes rather than earthen or brick pits, were a major health concern in Winnipeg because they were plentiful and poorly maintained – their contents tended to overflow and drain into streets and lanes. Statistics in the Chief Health Inspector’s report for 1909 reveal the extent of the problem. In 1905, there were 6153 box closets in the City. By 1909, there were none. However, outhouses with earthen or brick pits were still in use – there were 1485 in total in 1909.

X Close, then in use all over the City. The last box closet was removed in 1909. 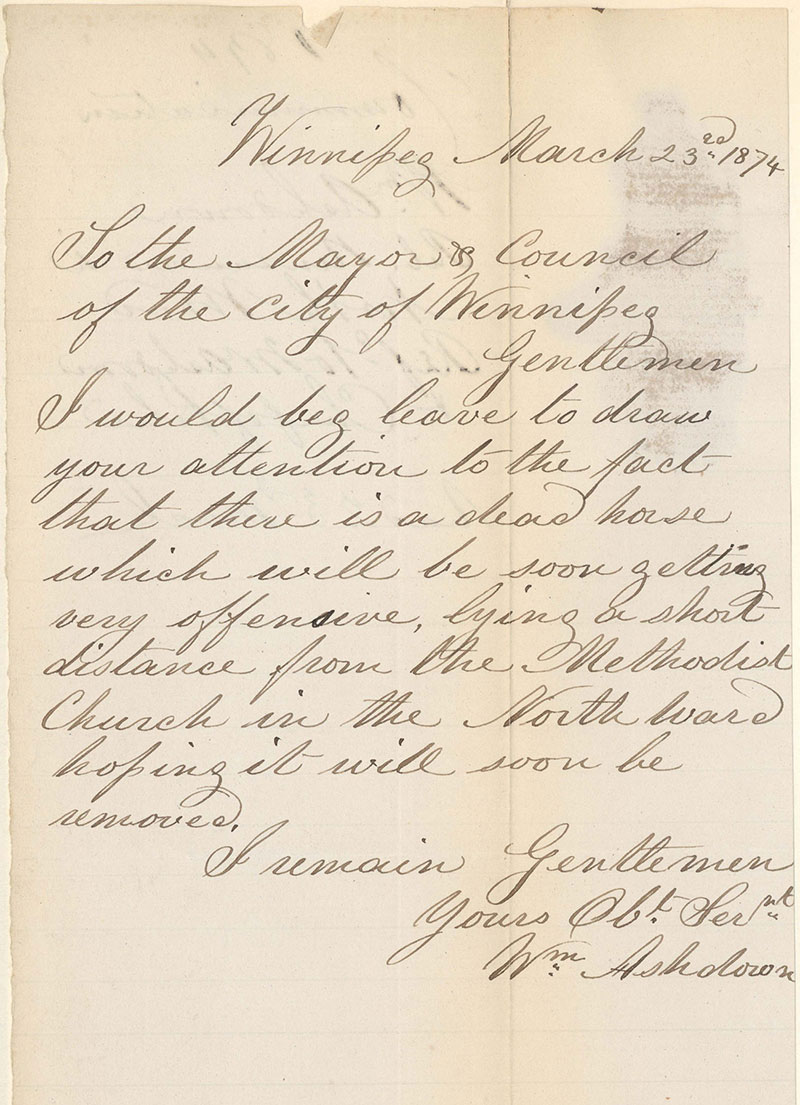 A Walk in the Park

In their annual report for 1896, the Public Parks Board expressed the view that “Music and flowers go far towards making life brighter and happier, and tend to lift the mind above the monotony, drudgery, and narrowness of the busy day." Influenced by prevailing attitudes toward green space and concerns for public health, the City set aside thirty-three acres of land for small neighbourhood parks (St. John’s; Fort Rouge; Central; Victoria; Dufferin; Selkirk; Notre Dame; St. James and Fort Garry).

Winnipeg also recognized the importance of children’s playgrounds. A Playgrounds Commission was struck in 1909, and in 1913, Earl Grey Earl Grey was born Albert Henry George, the 4th Earl Grey, on November 28, 1851 in London, England. He was appointed Governor General of Canada by the British Parliament in 1904. He made several trips to Winnipeg during his tenure as Governor General – he was in Winnipeg in 1905 to attend the opening ceremony for the City’s first library, the Carnegie Library at 380 William Avenue.

X Close remarked that "of all the towns and cities I have visited in Canada, Winnipeg is the leader in anything pertaining to the general welfare of children." By 1920, the Commission ran 26 playgrounds and 21 skating rinks for the "free use of children and the general public". 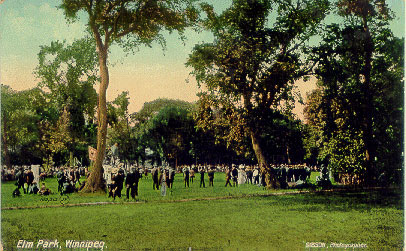 With a network of small parks in place by 1900, the Public Parks Board began to plan for larger suburban parks. Assiniboine Park or “City Park” was officially opened on Victoria Day, 1909. Located outside the city proper, City Park could be reached by taking the street car down Portage Avenue. Land for Kildonan Park was acquired in 1909 and 1910. 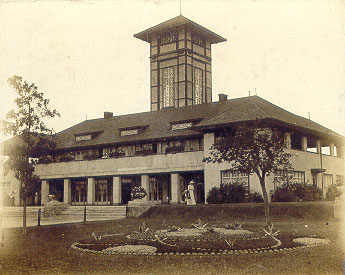 X Close equal to "ten times the amount guaranteed for annual support by the community." The City received $75,000 for construction of its first Carnegie Library. 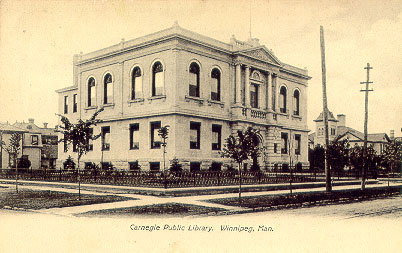 Cities are not all bricks and mortar. Winnipeg’s early citizens enjoyed sports and entertainment of all kinds. Team sports, band concerts, skating, racing and moving picture houses, these and other activities were an integral part of life in Winnipeg. 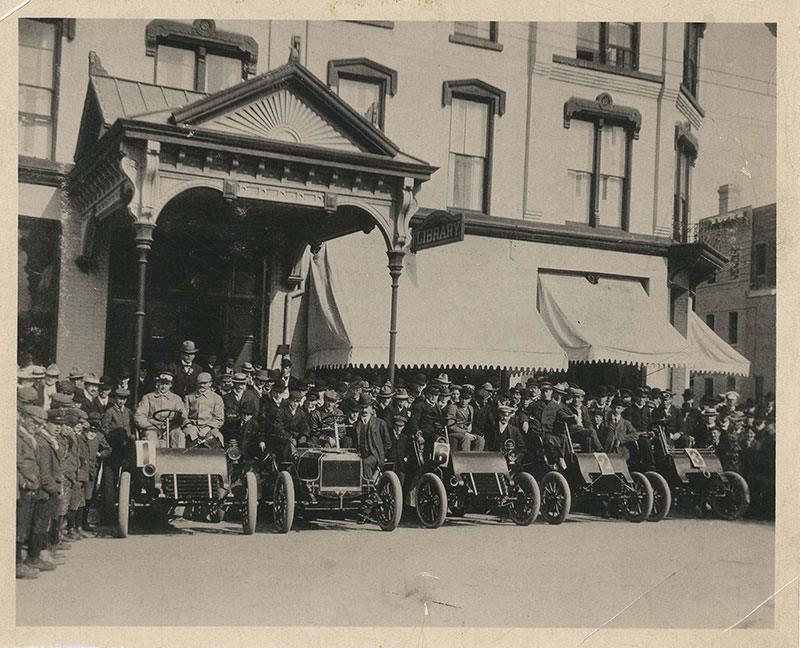 In 1924, the City of Winnipeg celebrated its first fifty years. June 18, 1924 was declared a Civic Holiday and featured a gala parade with over 240 floats. Exclusive dinners and inclusive dancing "on Market Square" to the music of Rignold's Permanent Players orchestra and Taylor’s orchestra were highlights of the celebration. The little settlement had come a long way, overcome many difficult issues and established itself as one of Canada’s major cities-the Gateway to the West, the Chicago of the North, the Bull's Eye of the Dominion! 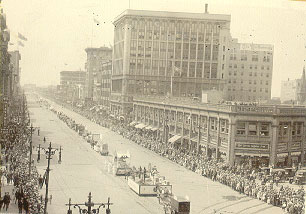