A municipal milk supply for Winnipeg.

An abundant supply of fresh and healthy milk is something we take for granted today. It wasn’t always so.

In 1889, James French James French was born in 1815, and died in Winnipeg on October 10, 1898. Though he wrote numerous letters to City Council and had a keen interest in civic affairs, very little is known about him. His obituary notes: "In the management of civic affairs Jimmy saw a great deal of corruption. His speeches at ward meetings and his letters to the papers were full of denunciation."

X Closewrote to Council to complain about the quality of milk available in the City. He suggested that cows were drinking too much water, which left the milk they produced unappealing, thin and blue-white in colour.

The complaint was likely well-founded, if a bit tongue in cheek. In the 1916 annual report of the Food and Dairy Division of the City’s Health Department, prosecutions for watered or skimmed milk were still being reported. Though the Inspector did note that the "majority of the offenders were old hands at the game who still persist in attempting to make something out of nothing." 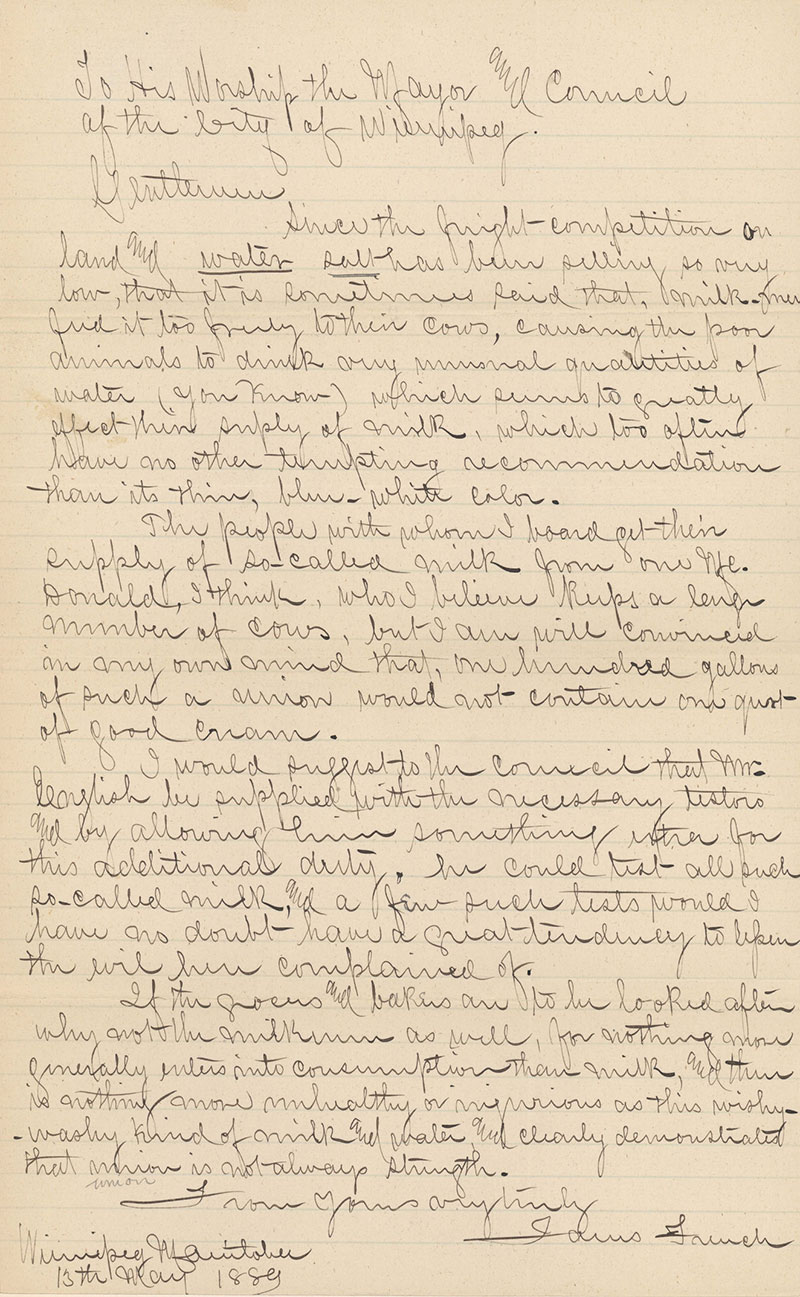 The City used by-laws, licensingIn 1877, William and Mary Huggard sent their food hawker’s license back to the City and made a request to Council to return their license money, with interest, given their understanding that other milkmen did not take out licences.

X Close, inspection, enforcement and a variety of scientific methods to control milk quality, as it was clear that contaminated milk could spread disease.

While resistance to City regulations was not uncommon, new and controversial tests for tuberculosis received particular attention from local dairymen. In 1895, members of the Winnipeg Dairy Association argued that tuberculine tests Tuberculine Tests were used to determine whether a cow was a carrier of tuberculosis.

X Close being administered to their cattle were inaccurate. In fact, they believed that these tests infected healthy cattle with tuberculosis, and so petitioned Council to discontinue the practice and dismiss the inspector because he did not have the confidence of the public at large. 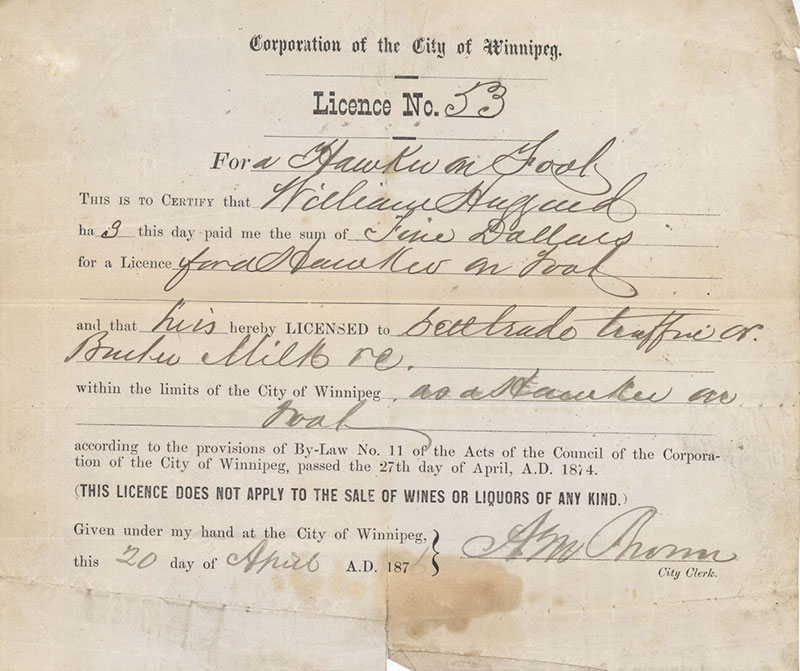 Since its earliest days, Winnipeg experienced annual epidemics of typhoid fever. However, typhoid was particularly virulent between 1901 and 1905, and Council called on an outside expert to study the situation.

In his report to Council, Edwin O. Jordon Edwin O. Jordon was an Associate Professor of Bacteriology at the University of Chicago in 1905 when City Council invited him to Winnipeg to investigate the typhoid epidemic.

X Close advised that home milk delivery practices were likely a factor in the spread of this disease and urged that "milk measuring vessels or general receptacles of any sort should not be carried into or removed from houses in which typhoid fever [was] present." 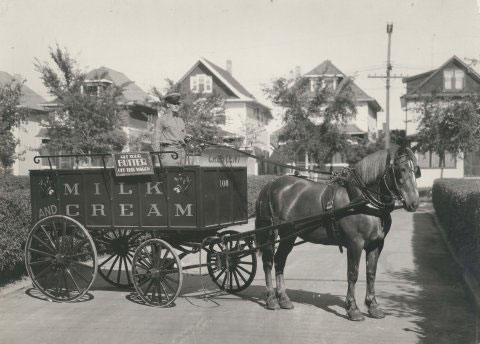 X Close. In 1913, Council appointed two child hygiene nurses. The following year, the City’s Bureau of Child Hygiene took over the Babies' Milk Depot In February of 1916, the City's Bureau of Child Hygiene moved the Babies' Milk Depot from leased space at 31 Martha Street to a new building on Aberdeen Avenue designed and built specifically for the work of the Depot. The building at 31 Martha Street was demolished in 1966 to make way for the south approach to the Disraeli Freeway.

The new Babies Milk Depot was located on the north side of Aberdeen Avenue, east of Main Street, on property owned by the Sister Servants of Mary Immaculate. The lease on this property expired on July 31, 1957. After considerable discussion, the Health Department determined that the building was no longer adequate for its purposes and the owners of the land were asked if they would be interested in acquiring the building. The building was sold to the Sister Servants of Mary Immaculate in 1958.

In the first year the Depot was run by the City, a total of 8,353 feedings of five to ten bottles each (40% of all feedings prepared) were made up for "charity cases" - babies from families not able to pay for formulas prescribed by the Depot's consulting physicians.

A new Babies Milk Depot on Aberdeen Avenue was opened in 1916. This facility was equipped with a waiting room for mothers, a dispensing room, pasteurizing room, doctor's office, and living space for resident nurses. 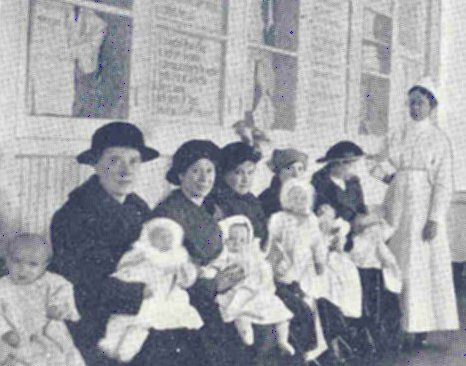 In 1911, the Food and Dairy Division of the Public Health Department reported results of an experiment they had conducted to show the reduction of bacteriological counts in milk at various stages and using various methods of pasteurizationPasteurization is the process of heating milk to a specific temperature for a specific period of time in order to kill micro-organisms that can cause disease or spoilage.

Public education urging the purchase of pasteurized rather than raw milk was a major concern of this Division.

At the same time, the Health Department was issuing monthly bulletins, the general message being that cleanliness reduces the incidence of disease - and in the case of milk, reduces the chance of diseases being passed on through impure milk or as a result of poor milk handling processes. 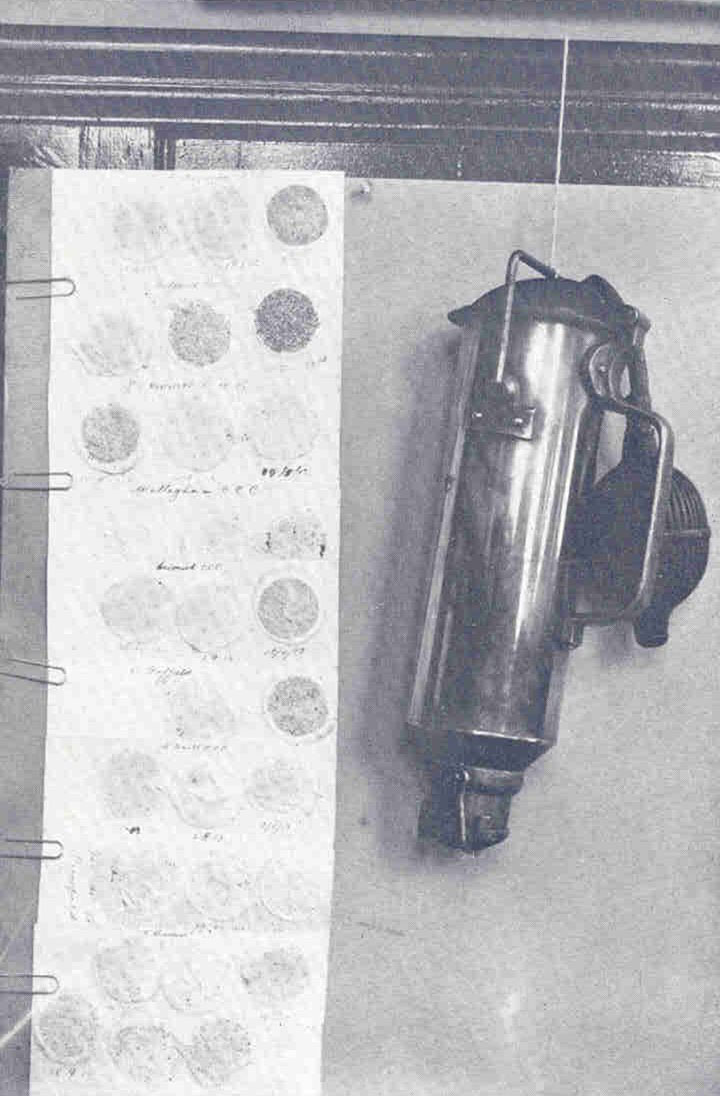 Despite all of these measures, milk quality and affordability was a continuing concern in Winnipeg. In 1917, Alderman Abraham Albert Heaps Abraham Albert Heaps was born in 1885 in England and arrived in Winnipeg in 1911. He ran for alderman in Ward 3 in 1915 and in Ward 5 in 1916, but was defeated both times. He won a by-election for alderman in Ward 5 in 1917, and retained this position by acclamation in 1918. He was then elected alderman in Ward 3 in 1920, 1922 and 1924. He was a member of the Social Democratic Party and was involved in events around the 1919 strike – in fact, he was arrested as a strike leader. Heaps was elected to the House of Commons as a CCF member in 1925, for Winnipeg North, and remained there until he retired in 1940. He died in 1954.

X Close brought forward a proposal calling for construction of a "Municipal Creamery to deal in milk and all milk products, with right to regulate prices of such commodities".

X Close of the Women’s Auxiliary, Winnipeg Anti-Tuberculosis Society, submitted a letter to Council endorsing the idea of a Municipal Milk Supply. 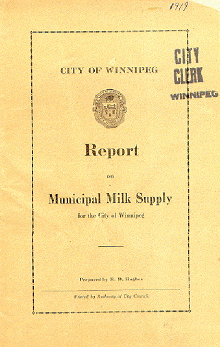 The Money By-Law on Milk

While Council supported the idea of a Municipal Milk Supply, start-up costs were significant and the City would need to borrow money to get the project underway.

According to Winnipeg's Charter, citizens had to be consulted when Council required a debenture A debenture is an unsecured debt backed only by the credit worthiness of the borrower. A debenture is not secured by a mortgage or lien on specific property. 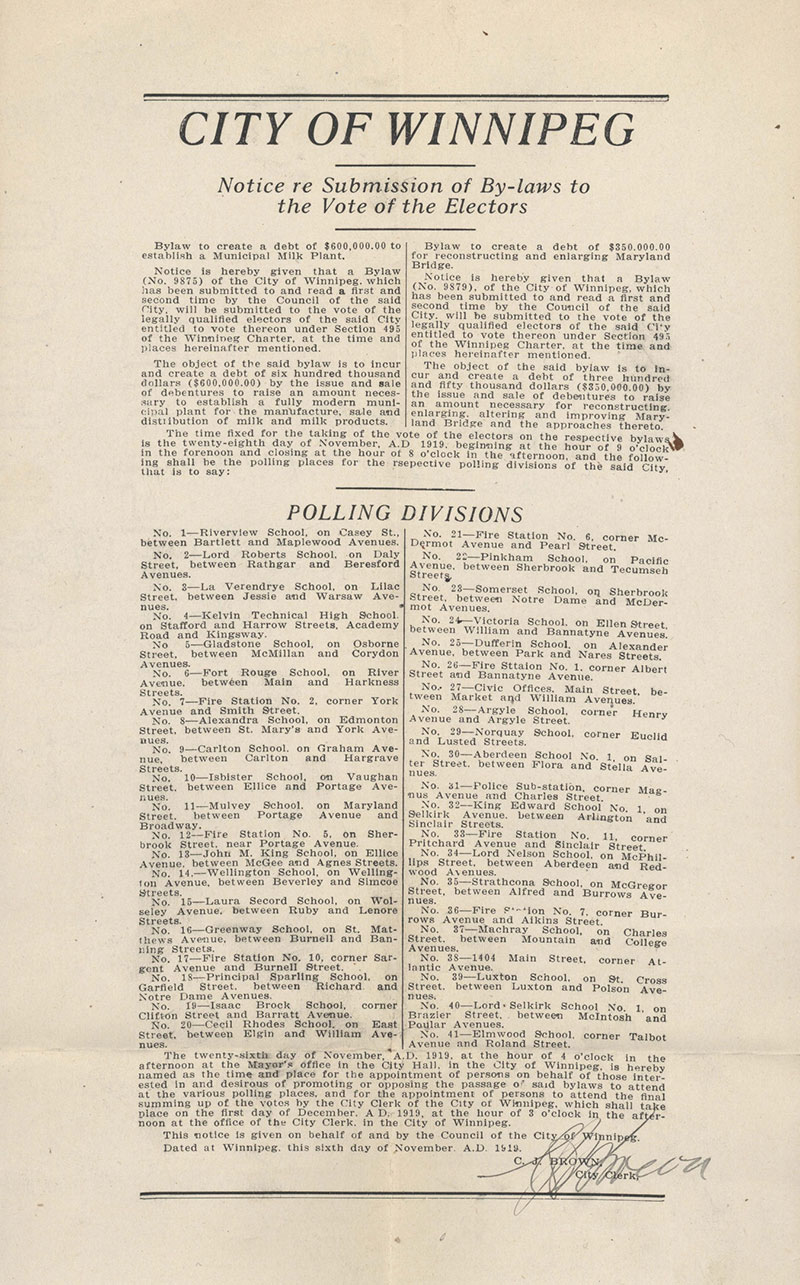 A North-South Split in the Vote

Although voter turnout was low, voting was close in most wards. Results show that electors in Wards 1-4 were against the by-law, while electors in Wards 5-7 voted in its favour – a rough north-south split The north-south split dates from Winnipeg’s earliest years. Winnipeg’s monied classes first built their homes in Point Douglas. However, with the arrival of the railway and the laying of tracks through that area, wealthy citizens moved out of Point Douglas to Armstrong Point and Wellington Crescent. In and around Wellington Crescent, developers limited new home construction to those who could afford a minimum investment of $6,000. Because many in Winnipeg’s immigrant community worked for the railways, they located in the North End of the City, close to their workplaces. Conditions in the North End were often cramped, and services such as clean water and sewage removal were but slowly extended into this part of the City.

Following the vote, City Clerk C. J. Brown reported to Council that the by-law had been defeated – 4864 in favour, 5002 against – and plans for a Municipal Milk Supply were laid to rest. 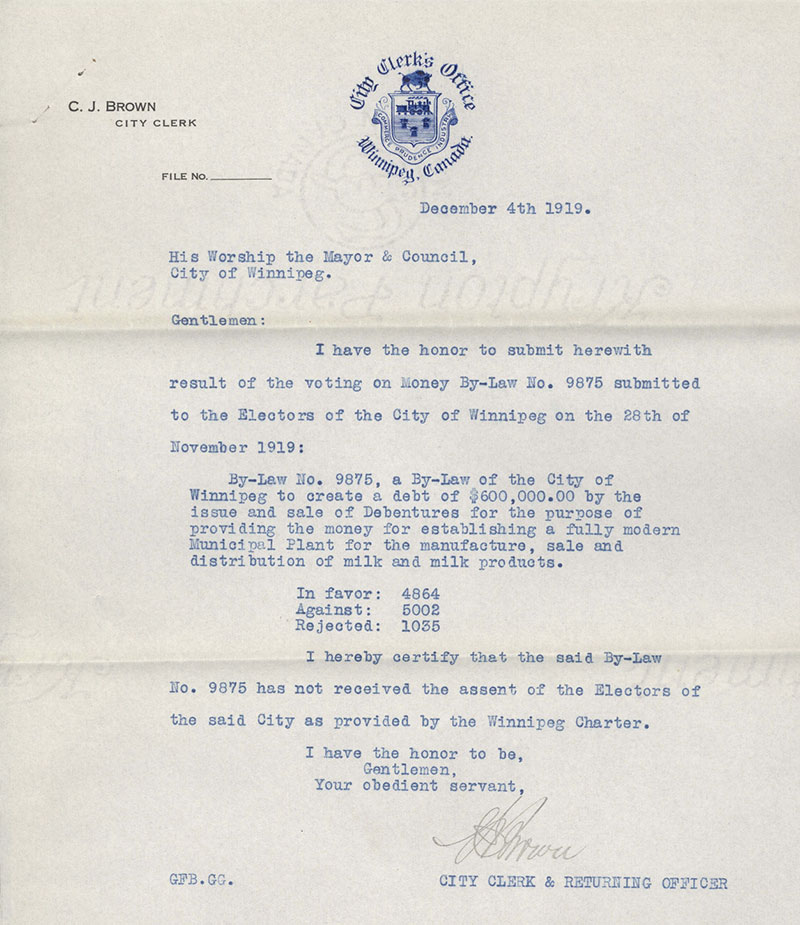