In 1884, Council considered a letter from James French suggesting that women be granted voting privileges if they met all other qualifications. His letter was timely, as a national debate around female suffrage was then underway. While the issue was dropped by the dominion government, women in Winnipeg received the civic franchise late in 1887. Four hundred and seventy-six women were eligible to vote in the civic election of 1888, and eighty women voted.

This right was limited briefly in 1906 when an amendment to the Municipal Act changed the wording for qualifications of electors from “male or female” to “men, unmarried women or widows”. The 1906 amendment was repealed in 1907, and all qualified women were again able to vote in municipal elections.

These gains though significant fell short as only property owners could vote in civic elections. In Winnipeg, the civic franchise was extended to all adult residents, both men and women, in 1942. 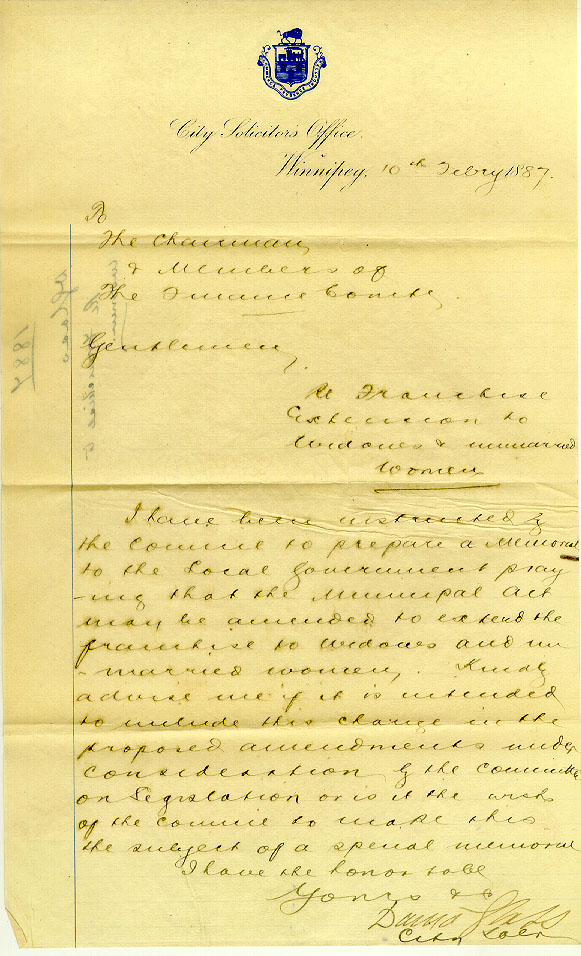 While women were eligible to vote in civic elections in Winnipeg as early as 1887, they were not able to hold office until 1916. The first woman to run for Council was Alice A. HollingAlice A. Holling ran in Ward 7 in 1917, but was defeated. She ran in 1921 in Ward 2, but was again defeated. Her nomination form states only that she was a “married woman” (Mrs. Luther Holling). However, she was an active member of the Political Equality League, other members of which were Lillian Beynon Thomas, E. Cora Hind, Dr. Mary Crawford and Nellie McClung.

Women on Council held many prominent positions over the years, acting as chairs, delegates, and speakers. Another milestone came in 1992 when Susan A. ThompsonSusan A. Thompson was the 40th Mayor and first woman Mayor of Winnipeg. She spent most of her youth in Winnipeg and graduated from the University of Winnipeg.

Embarking on a successful career in retail, Thompson worked for Eaton's and the Hudson's Bay Company in Winnipeg, Calgary, and Montreal. Returning to Winnipeg in 1980, she bought the family business Birt Saddlery, a long standing and well-known local business. In her capacity as an independent businesswoman, she worked hard to break many barriers for women in business.

In 1992, Thompson threw her hat in the mayoral ring, winning the election in October of that year. She won a second term in 1995 and was instrumental in guiding forces in the fight against the Flood of the Century in 1997. Thompson did not seek a third term in 1998. Instead, in 1999, she was appointed as the Consul General for Canada in Minnesota, the first woman to hold that position since it was instituted 30 years earlier. During her tenure as the Consul General, Thompson actively promoted Canadian business and political interests. In 2003, Thompson became the first and founding President and CEO of the University of Winnipeg Foundation.

X Close was elected as the first woman mayor of Winnipeg. She was re-elected in 1995, and chose not to run in 1998.

Find Votes for Women timelines along with other educational resources at Puzzles, Games & Lesson Plans. 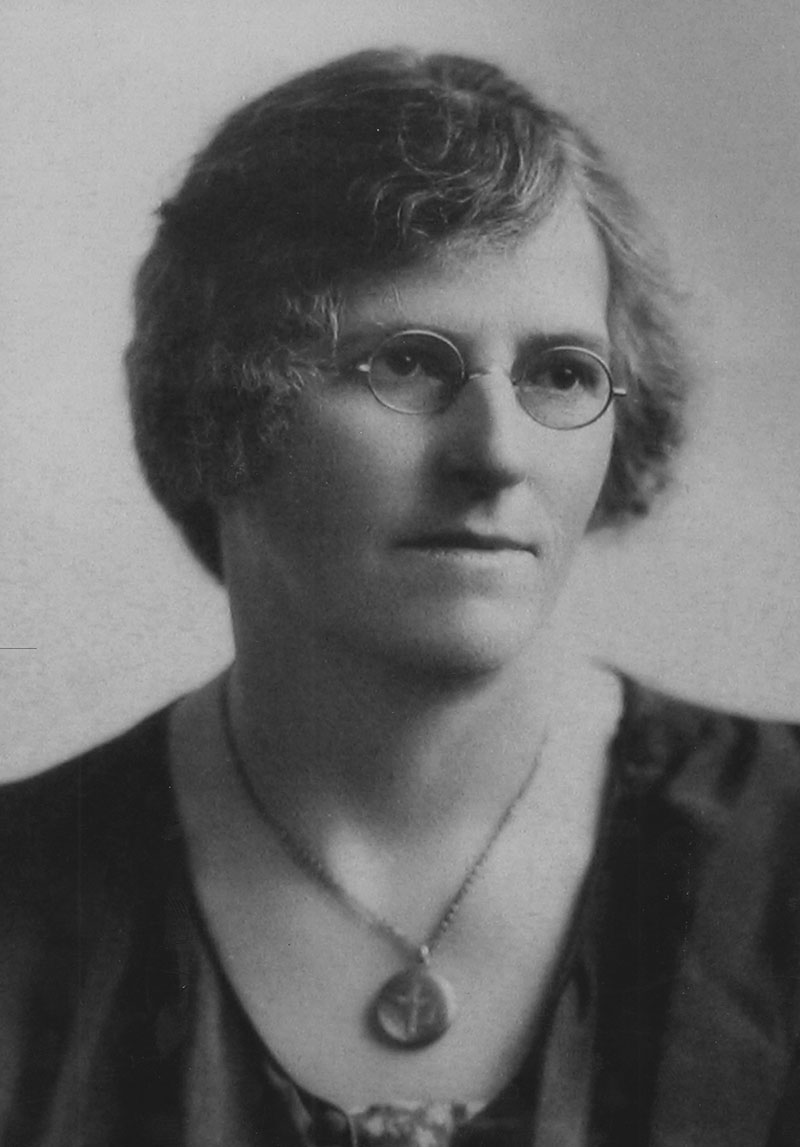 In 1957, the Greater Winnipeg Transit Commission (GWTC) introduced Winnipeggers to “Transit Tom” in a promotional campaign that sought to increase ridership at a time when people were increasingly traveling by car. Tom, a smiling, clean-shaven “friendly little fellow” was modeled after the ideal bus driver – someone who was helpful, patient, and polite. Tom encouraged citizens to “take a bus” and readily provided passengers with helpful tips on how to reach their destinations in a safe, efficient, and pleasant manner. Tom became such a well-known personality in Winnipeg that, rather than taking the bus, passengers took Transit Tom.

Until it was replaced by Unicity in 1971, Metro met with ongoing resistance from area municipalities, was blamed for increased taxation, and was accused of being remote to citizens.

X Close (Metro) in 1960 and to the City of Winnipeg in 1972. Variations of Transit Tom appeared over the years, testifying to the success of the original campaign. 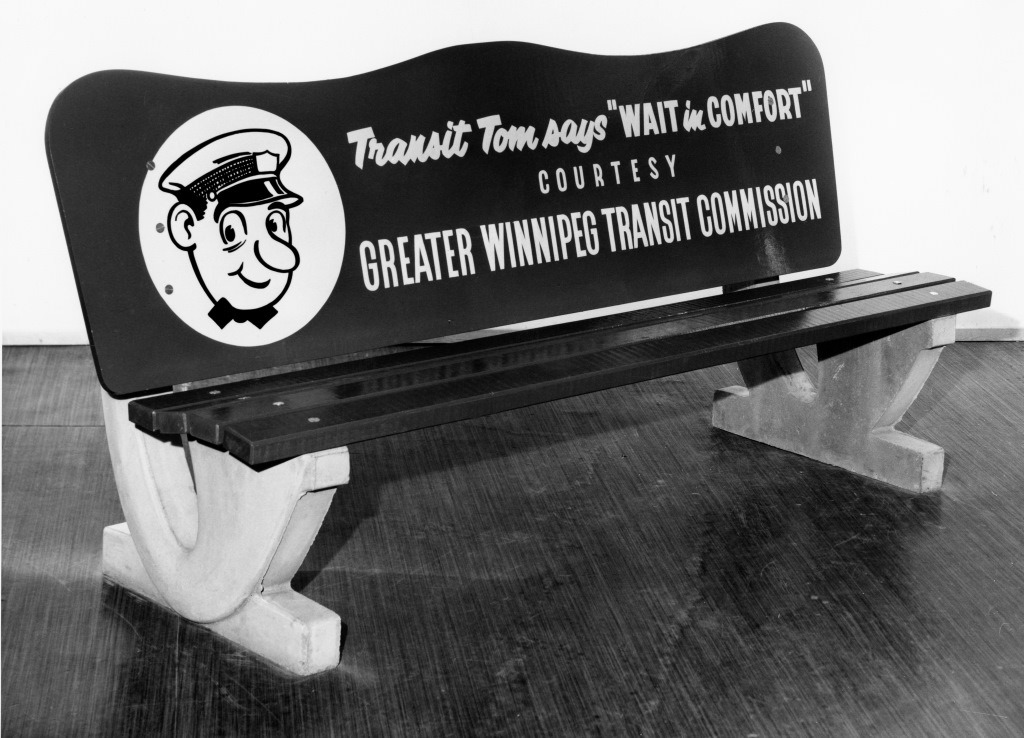 In 1913, toward the end of Winnipeg’s boom years, Robert and Louise Gifford, of 146 Spence Street, ordered the construction of a house at 49 Balmoral Place. At the time, it was the second house south of Whitehall Place, a road that connected with Colony Street and Osborne Street.

The Giffords were among the many residents to live at this address. In the early 1960s, it was home to university students and the Zeta Psi fraternity who leased the house from the Great West Life Assurance Company. The house was demolished in 1977 or 1978. Eventually, all houses on the east side of the block were demolished, with the exception of 51 Balmoral. It is now the future site of a daycare.

Photographs, permits, and maps that document 49 Balmoral Place help us to imagine what the house looked like, in addition to serving as a reminder of the changes the neighbourhood has witnessed over the years. 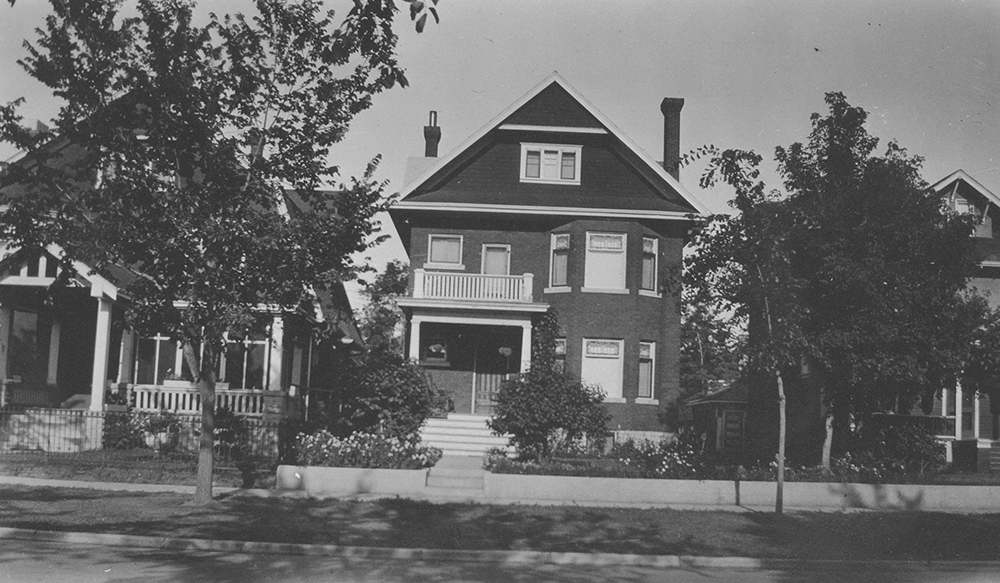 Popularity for the bicycle spread across Europe and North America in the nineteenth-century. Cyclists found this mode of transportation to be affordable, convenient, and enjoyable. Winnipeg was not immune to the bicycle craze. Early in its history, the City built cycle paths to accommodate the increasing number of cyclists and even purchased a bicycle for use by the City Timekeeper.

Starting in the 1880s, the City passed a series of by-laws to regulate bicycles. These actions were partly in response to safety concerns voiced by citizens like John R. Dutton. After describing a near incident with a cyclist, Dutton requested better protection for women and children on sidewalks. By-law No. 1198 addressed concerns by setting a speed limit for bicycles (eight miles/hour) and stipulating that cyclists use “lighted lanterns” to improve safety at night. Offenders faced a fine of up to fifty dollars.

While this by-law was rescinded long ago, the City has continually dealt with matters related to bicycles and their use in a changing landscape. 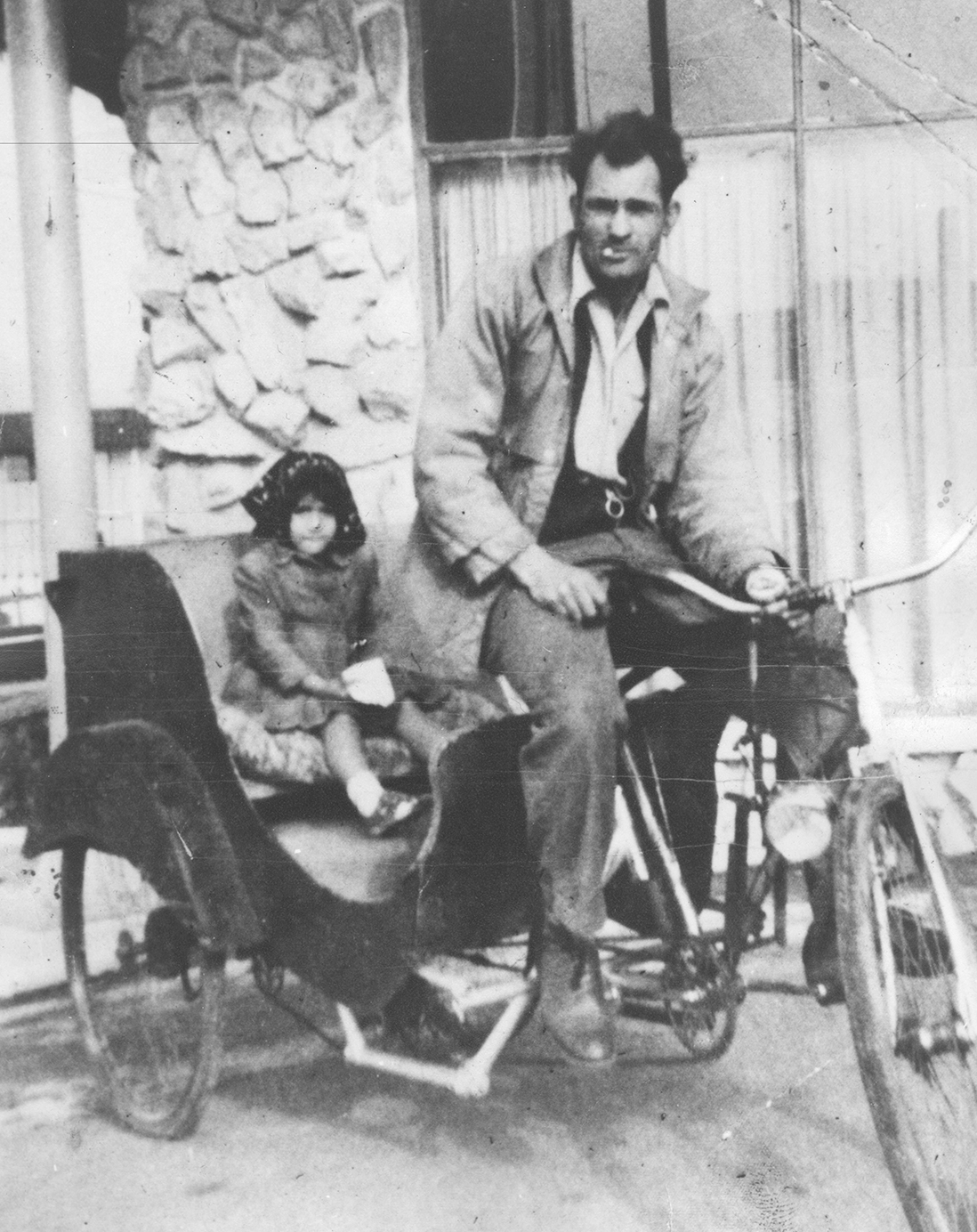 Back in the 1930s, the automobile was the latest thing and growing in popularity. Streets once dominated by pedestrians and horses were filling up with motor vehicles. Letters submitted to the City help to document the array of traffic problems at this time.

Formed by the City in 1936, the Advisory Traffic Commission recommended actions to improve all matters related to traffic. The Commission's activities included reviewing requests to erect stop signs at intersections, implementing parking bans and parking meters, and selecting sites for crosswalks. Notably, its members recommended amending the Highway Traffic Act to require that all motor vehicles have rear bumpers. 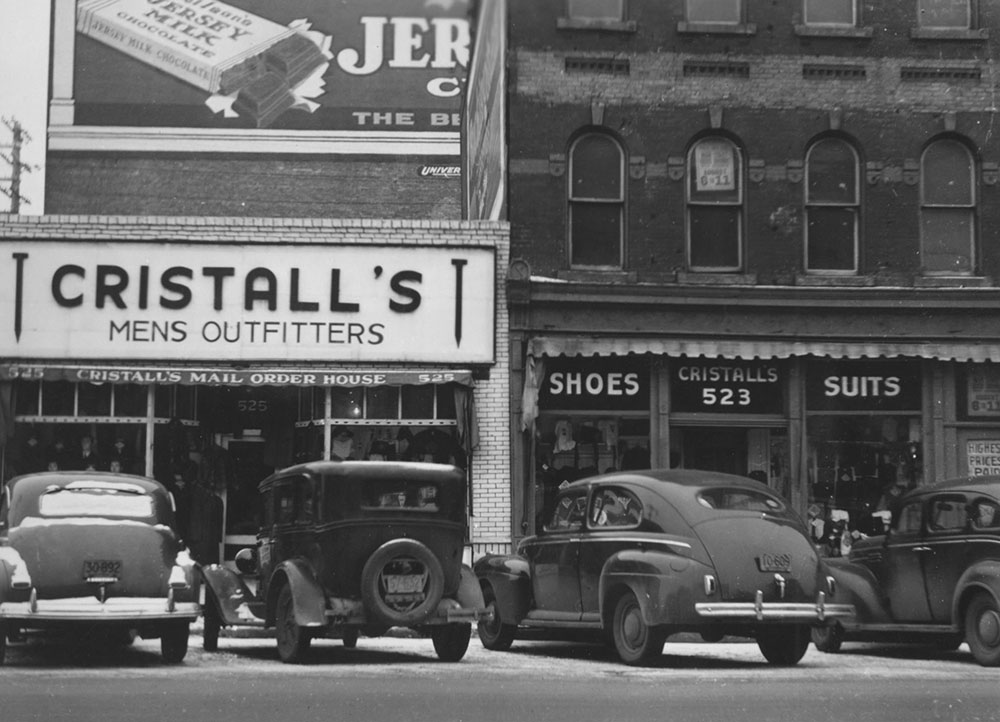 Patsy's Christmas Party was part of a series of children's tea parties organized by the Eaton's Department Store. Held in the Eaton's Grill Room, each party had a different theme based on either a holiday or a children's story like The Wizard of Oz. Alice Weir, a classically trained dance instructor, arranged for the entertainment at some of these parties. From 1918 to 1932, Weir trained her young pupils at her dance studio on Wardlaw Avenue.

The holiday menu for Patsy's Christmas Party consisted of sandwiches, ice cream with spun sugar, ice cream wafers, mints, tea, cocoa, and milk. There was even an ice cream snowman! Lyrics to songs were printed on the menu so the children could participate in a sing-along. The children were also entertained by dance numbers performed by Weir's students. 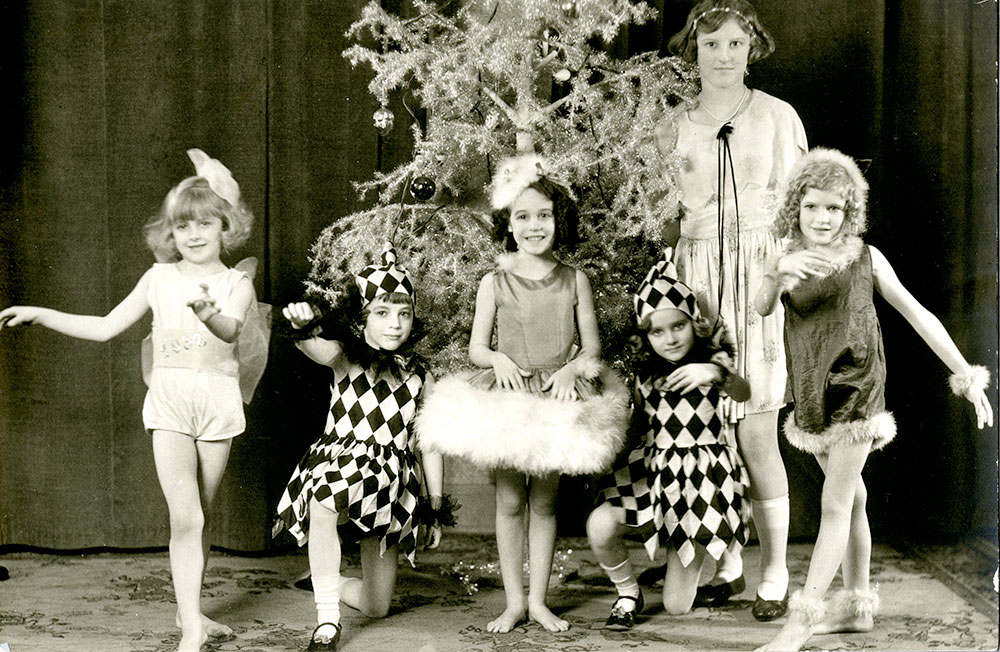