Starting in 1910, the Waugh Shield Children’s Gardening Competition opened to children between the ages of 8 and 14. As noted in a pamphlet created by organizers, its founder, R. D. WaughRichard Deans "R. D." Waugh (1868-1938) was a prominent citizen in Winnipeg with a strong record of public service. In addition to being a former Mayor of Winnipeg (1912, 1915-1916), Waugh served as Secretary of the Cycle Path Board, Chairman of the Parks Board, Chairman of the Playground Commission, Controller on the Board of Control, Chairman of the Greater Winnipeg Water District, and Chairman of the Winnipeg War Memorial Committee. In 1910, he founded the Waugh Shield Children’s Gardening Competition, which he sponsored until his death. At its height, the event included an estimated 20,000 children in the greater Winnipeg area.

X Close, “conceived the idea that when children are doing something for themselves under competitive stimulation, and, of course, with the necessary stimulation of parents, teachers, and other interested persons, they not only learn devotion to duty, appreciation of nature and beauty, but they spend their surplus energy on something constructive rather than on something undesirable.”

Gardens had to be 100 to 150 square feet, with no path or division. Participants were required to use seeds given to them, including table beets, carrots, dwarf beans, zinnias, and marigolds. Noteworthy gardens were entered in late July and judged in early August.

The municipality that produced the best garden received the Waugh Shield. There were gold, silver, and bronze medals for the three highest scores. Four cash prizes were awarded in each municipality to gardens that scored high enough, and a prize was reserved for an eight-year-old child who did not receive another prize. 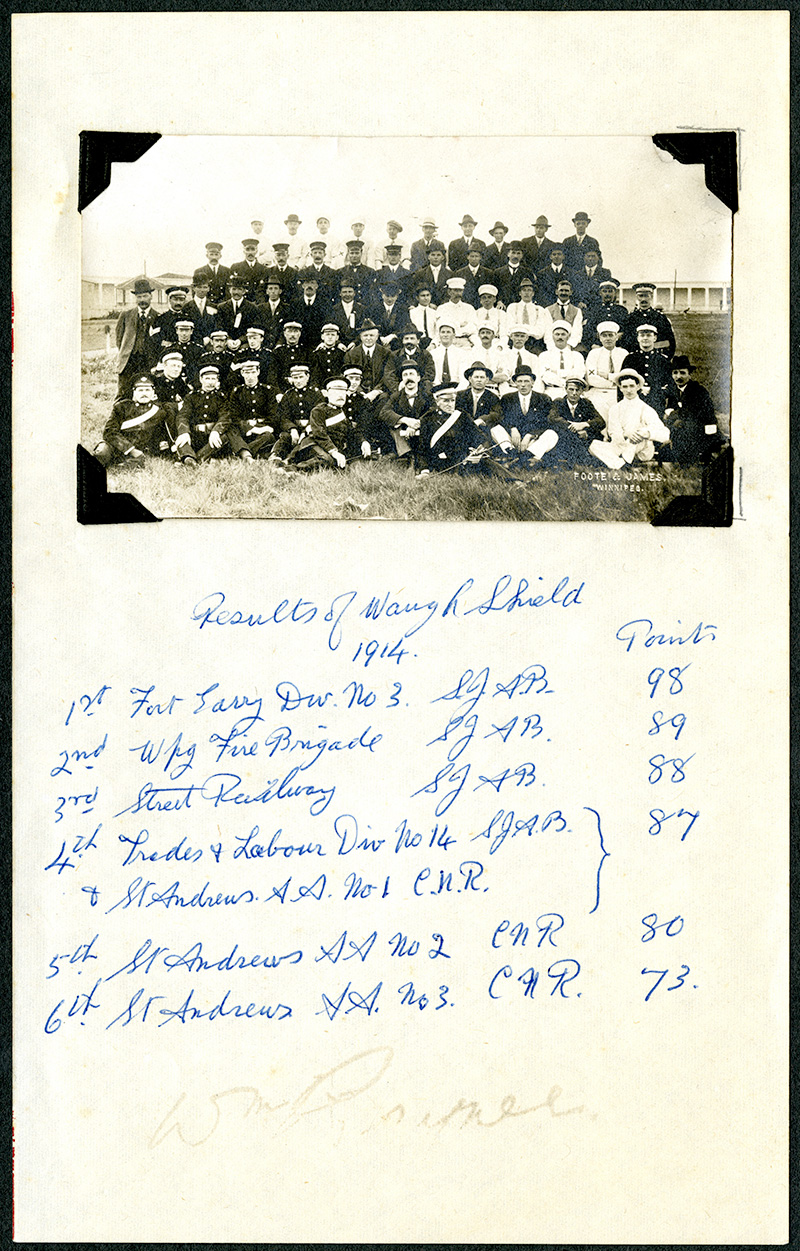 The grounds at Home Street and Portage Avenue now known as Vimy Ridge Memorial Park were first developed as a park site in 1906. Originally called St. James Park, it was re-named following a Council decision to honour those who took part in the Battle of Vimy RidgeThe Battle of Vimy Ridge took place in northern France during the First World War when Canadian forces successfully captured Vimy Ridge from the Germans (April 9 to 12, 1917). This was a milestone victory owing to the advantage gained by taking Vimy Ridge, the careful planning of the attack, and the skill deployed on the ground. It has long been considered a defining moment in Canadian history.

X Close. In the words of one member of the 44th Battalion Association, "the Monument is a Memorial to 6,000 Canadian men, mostly from Manitoba, but from all parts of Canada, and honours not only those killed in battle, but the men who have since passed on."

The re-naming of the park was marked by a special ceremony on June 15, 1967 that also saw the re-dedication of the memorial. The Minister of Veterans Affairs Roger Teillet, Mayor Stephen Juba, and members of the 44th Battalion Association attended the event, celebrating their combined efforts to re-new the park, preserve the memorial, and commemorate the Battle of Vimy Ridge. 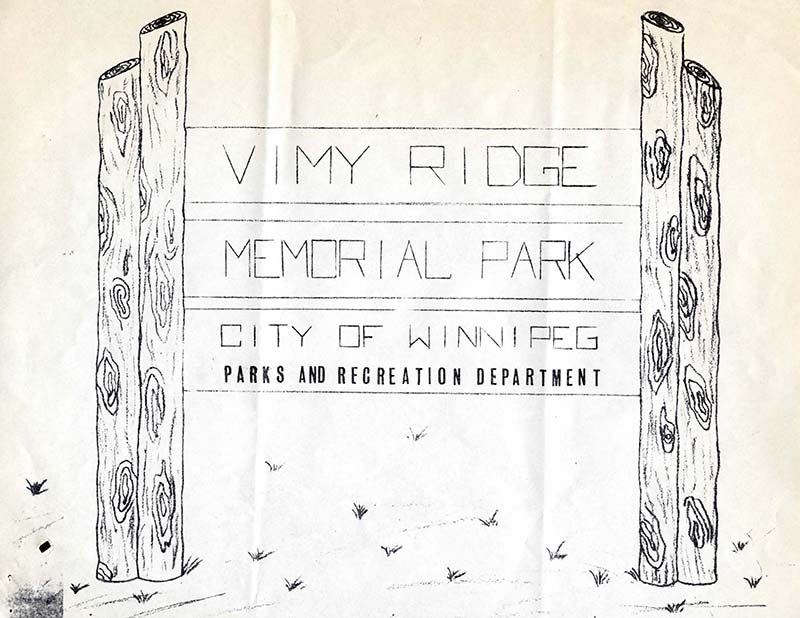 The 2002 NAIGThe North American Indigenous Games (NAIG) is a multi-sport event that has been held intermittently across North America since 1990, in culmination of a vision to hold games for the Indigenous peoples of North America that began in the 1970s. The NAIG vision is to help improve the quality of life for Indigenous peoples by supporting sporting and cultural events, and by encouraging participation in the social, cultural, spiritual fabric of Indigenous communities.

X Close was held in Winnipeg following the City’s successful 1997 bid to host the event.

Indigenous youth and artists were invited to create a logo for the 2002 NAIG to reflect the spirit and cultural significance of the games in an artwork competition. This design by Rita L. Albert was selected because of the artist’s “excellent interpretation of the Sport and Cultural celebration planned for the summer of 2002,” (A2111 File 166). The logo includes an outer circle to represent the unity of different cultures in the shared vision and spirit of the Games; a “participant” lifting his/her arms in victory and celebration to represent competing athletes and cheering supporters; a yellow sun to symbolize a new day, a bright future, and the beginnings of the 2002 Indigenous Games; and a headdress of feathers.

The 2002 NAIG was acclaimed as a successful and enjoyable multi-sport and cultural celebration involving Indigenous athletes, coaches, performers, volunteers and spectators from across Canada and the United States.

Winnipeg hosted the Pan-American Games, the "Olympics of the Western Hemisphere," from July 22 to August 7, 1967. This was the fifth occurrence of the international sporting event, which began twenty years prior, and it was the first time the Games were held on Canadian soil.

Mayor Stephen Juba was instrumental in bringing the Pan-American Games to Winnipeg. After a strong campaign, it was decided that Canada should be the host country in 1967 because it was Canada’s centennial year. Officials agreed that Winnipeg was uniquely positioned to host the Games.

The 1967 Pan-American Games were expected to be the largest sporting event ever held in North America and involved 33 countries, approximately 3,000 athletes, and over 2,500 volunteers. Winnipeg invested in new infrastructure and built the Pan Am Pool, cycling velodrome, and track and field stadium. Existing facilities used in the Games included the Winnipeg Arena, Civic Auditorium, and Minto Armouries. Organizers also utilized the Floodway, which was filled with seven-hundred million gallons of water for rowing and canoeing events. 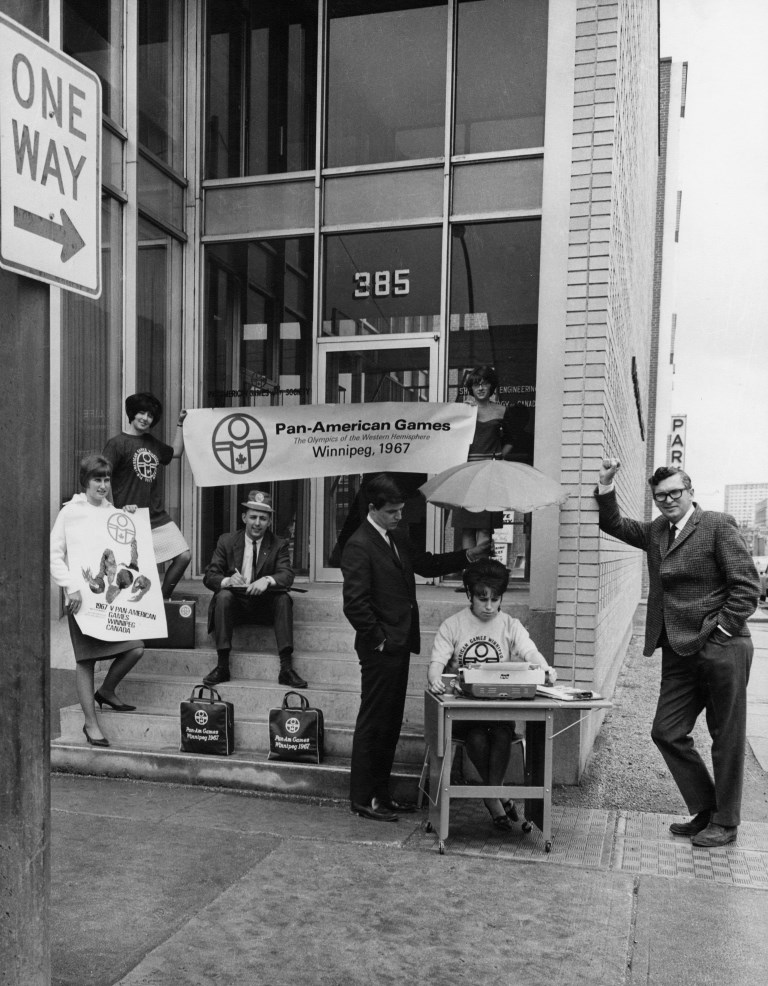 Eaton’s first event that featured Santa Claus in Winnipeg was held in 1905. At this event, members of the public greeted Santa at the CNR station on Main Street and escorted him to the Eaton’s department storeThe Eaton’s department store was formerly located at 320 Portage Avenue (the present site of Bell MTS Place). The store was demolished in 2002.

X Close. Santa distributed treats and toys to children along the way. By 1909, the procession had evolved into a parade that grew in size and popularity over the years. Eventually, the parade route changed as well. The starting point moved from the train station to Mountain Avenue and McGregor Street. From there, the parade wound its way through such streets as Salter, William, Sherbrook, Portage, and Broadway.

In 1967, Eaton’s announced it would no longer host the Santa Claus parade in Winnipeg. The company argued that changes were needed to keep up with a "rapidly-changing world" in which people could view the Santa Claus parade in Toronto on their television sets. Community organizers and their partners, however, saved the paradeAfter Eaton’s withdrew, the Fire Fighters Club stepped up to organize the Santa Claus parade. It fell to them in part because of their previous work on the Christmas toy drive. In 1975, the Winnipeg Jaycees took over the parade and held it until 2004. In later years, the parade depended on partnerships between the Jaycees, Manitoba Hydro, and other parties. Finally, in 2012, the Winnipeg Parade Committee was established as a not-for-profit organization tasked with producing the Winnipeg Santa Claus Parade. 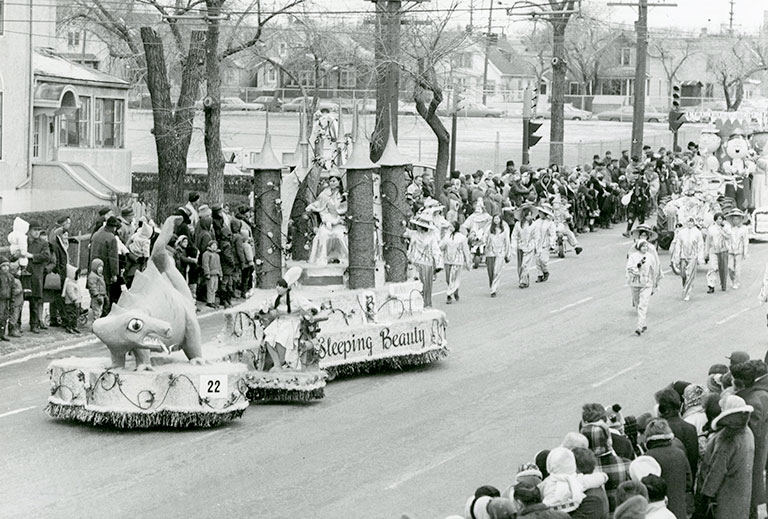 X Close to a friendly hockey game. The date and time were set for Saturday, March 2 at 8 pm. A raucous crowd of 4,000 showed up at the Winnipeg Arena to cheer on the energetic politicians who participated in this friendly but fierce competition. The final score was 4-1 for the City Fathers. Following the victory, the Honourable William John McKeag, Lieutenant Governor, presented the Centennial Legislator’s Cup to Mayor Stephen Juba. The City Fathers took their prize home to City Hall, and the cup was eventually moved to the City of Winnipeg Archives for safekeeping.

According to an article published in The Peg, the City Fathers "proclaimed themselves the champions of all elected people in Canada." Mayor Stephen Juba challenged other cities to organize more of these matches in the spirit of friendly competition. 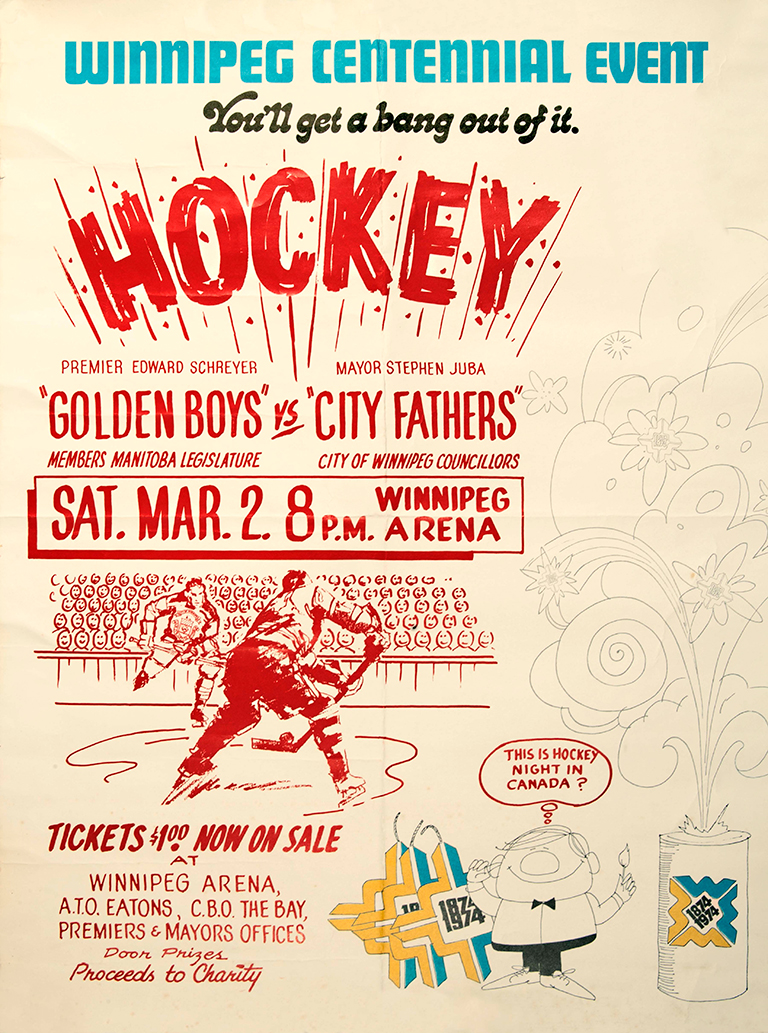