Selected images from our growing collection of photographs, maps
and documentary art.

The first Maryland Bridge was constructed in 1894 when traffic to the area south of the river was very light. It was sometimes called Boundary Bridge because Maryland StreetMaryland Street was originally named Boundary Street (1874-1891), so-called because it marked the western edge of the new City of Winnipeg. It was briefly renamed Fifteenth Street between 1891 and 1893, when the City experimented with a numbered street naming system. By 1893-1894, it was known as Maryland Street.

X Close once marked the western limits of the City of Winnipeg.

In 1919, with traffic increasing and concern over the safety of the bridge mounting, Council asked City Engineer W. P. Brereton to conduct a Census of TrafficBrereton reported to Council that the “densest traffic occurred between 5 and 6 o’clock. Considering both north and south bound vehicular traffic at this hour there were 383 Autos, Auto Trucks, Heavy Teams, Light Horse Vehicles and Street Cars – bicycles are omitted. This gives an average of over six vehicles a minute.” * He then recommended that weight and speed restrictions be enforced and that an independent report be commissioned.

In June of 1920, Consulting Engineer J. G. Legrand reported that “this bridge is completely unfit for modern traffic, and if traffic must be maintained, the streetcars and trucks loaded over five tons, should not be allowed on this bridge. In fact I consider this bridge in a worse condition than the Norwood Bridge on which I was called upon to make a report by the City of St. Boniface. The City of Winnipeg is certainly taking too much risk in letting heavy traffic pass over this bridge.” **

X Close By 1920, construction of the second Maryland Bridge was underway.

The present Maryland Bridge was constructed in 1969/1970. Renovations to the northbound and southbound spans of the bridge were completed in 2005 and 2006 respectively. 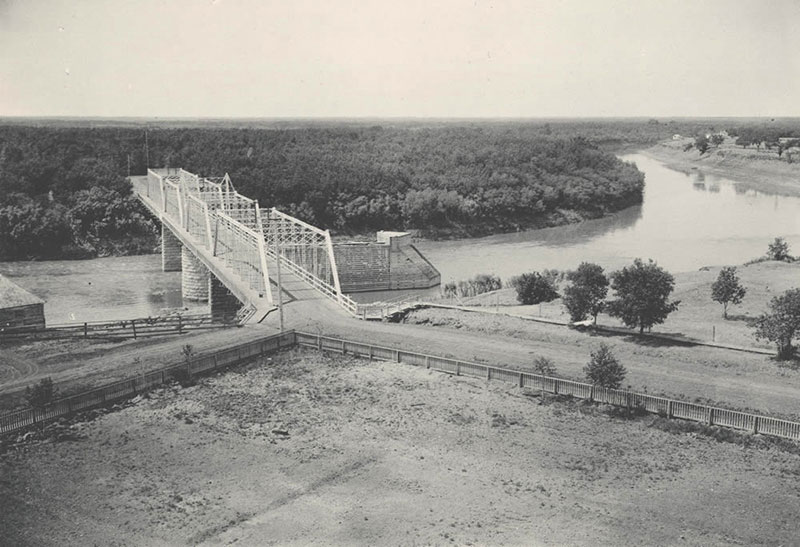 This photograph of Israel Bennetto was taken circa 1883-1884. Born in Hamilton, Ontario in 1860, Bennetto arrived in Winnipeg around 1880 and established a photography and photographic supplies business which operated out of various locations in downtown Winnipeg. The business flourished until he retired in 1906 to take up other interests. He died in 1946 and is buried at Elmwood Cemetery.

This particular photograph is one of forty portraits taken circa 1884, for which Bennetto was paid $100.00 (Auditor’s Report, 1884). The payment was disputed by Alderman Edward L. Drewry

, who believed that the cost of this work should have been paid directly by the portrait subjects, not the City. 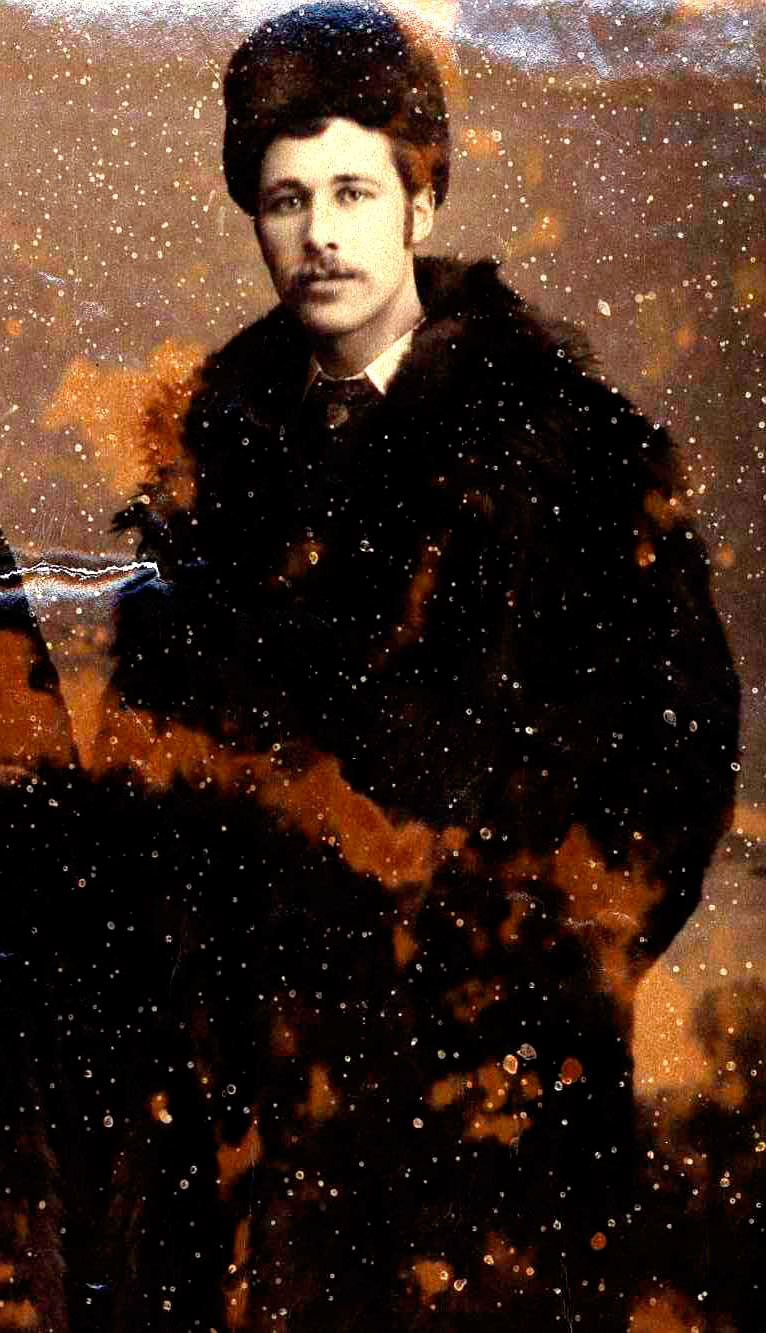 Until recently, these portraits were in poor condition and it was not possible to identify individual subjects (the paper support for each print was tightly curled and brittle to the touch). In 2008, a conservator determined that the portraits were albumenA common nineteenth century method for printing photographs. Albumen prints tend to have a smooth, shiny surface, which results from a coating of egg whites (albumen) applied to the surface of the print.

X Close prints and was able to safely humidify and flatten the images. The prints are approximately 10cm x 14cm and most of the forty individuals captured in these portraits have now been identified as civic politicians, civic officials, members of the press, or prominent businessmen associated in some way with the city. 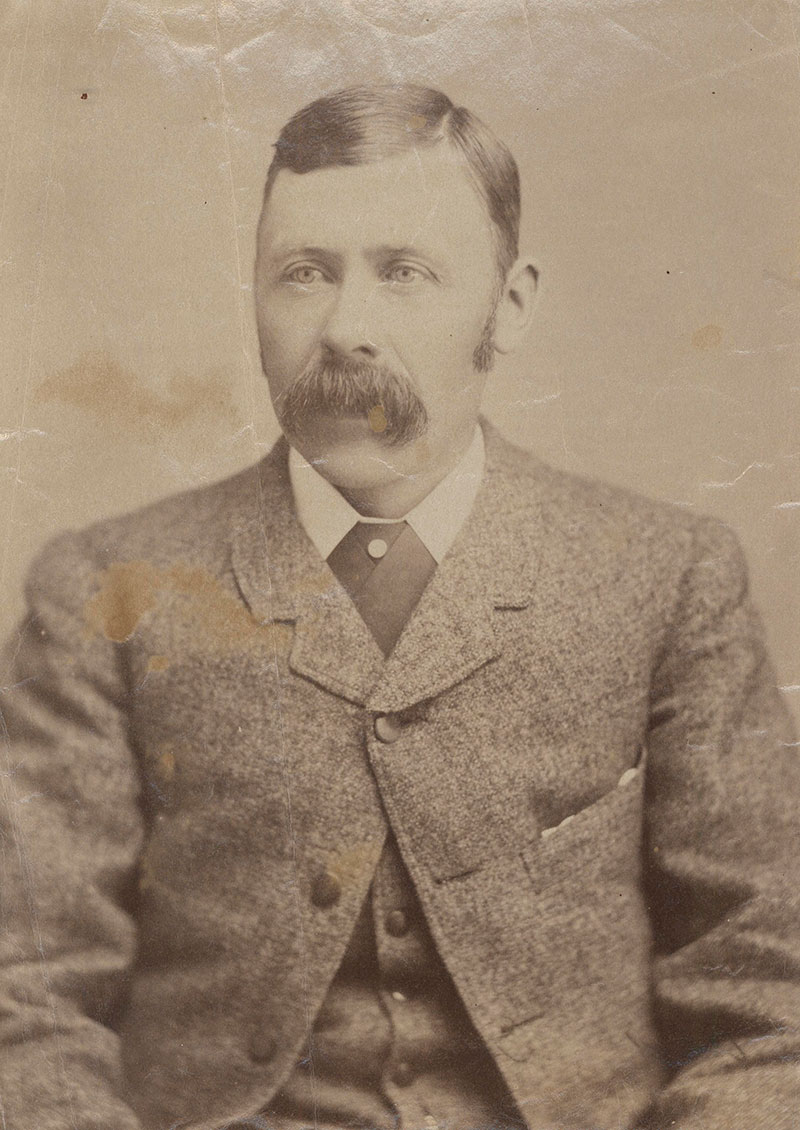 Circa 1901, a young Fred Cluett Landen arrived in Winnipeg to see what the city had to offer. He took a number of photographs of city homes, commercial buildings and modes of transportation, as well as two portraits of himself near the Red River. Family history has it that the photographs were taken to convince his fiancée that a move to Canada was a good idea. In 1904, Landen settled in Winnipeg with his wife, Mary Elizabeth, set up a painting and decorating business, and lived here for the rest of his life.

Fred Landen’s photographs are contained in an album he shared with his brother, Arthur. Arthur Landen was a Lieutenant and Quartermaster in the 1st Battalion, Northumberland Fusiliers. His photographs were taken while stationed abroad in Africa, Egypt, Spain and Gibraltar between 1887 and 1901. The album also contains a number of photographs taken in Hull, England, their home city. 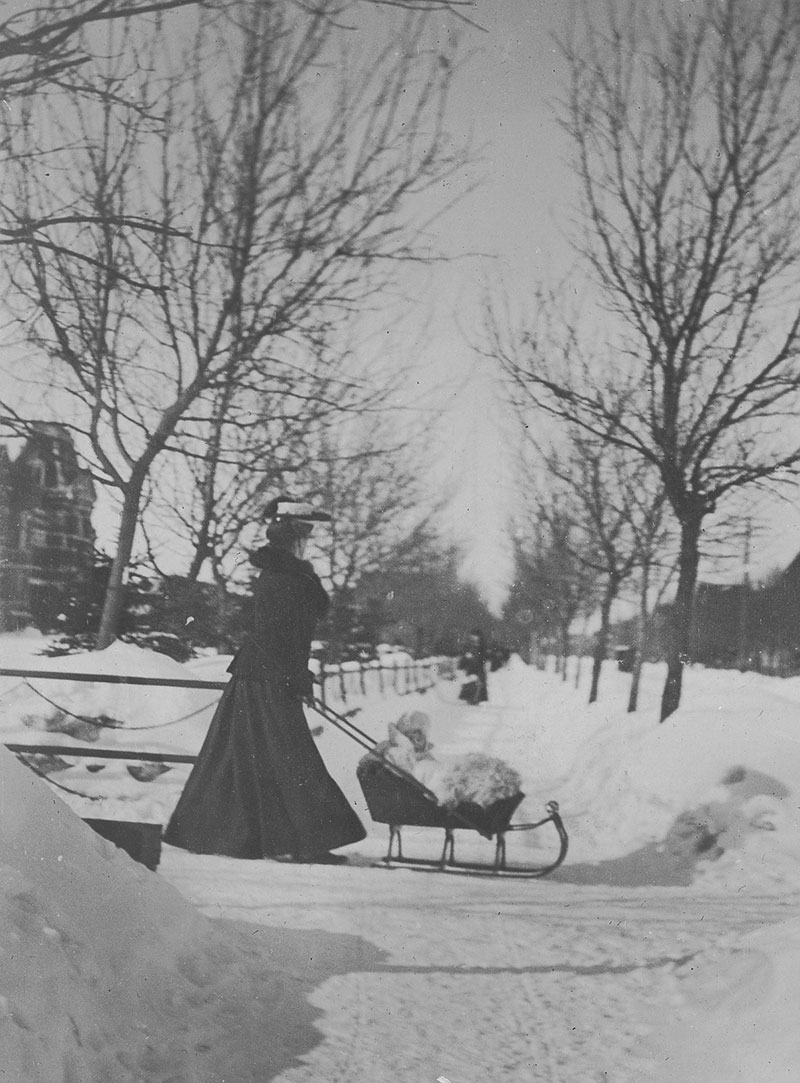 When "999"The number "999" was already in use as an emergency telephone number in Great Britain.

X Close went live on June 21, 1959, Winnipeg was the first city in North America to provide its citizens with a three digit emergency number.

The new service was a joint initiative of the City of Winnipeg and the Manitoba Telephone System. City Council approved the purchase of telephones, voice recording equipment and an automatic time announcer that allowed operators to receive multiple emergency calls and provide direct connections to fire, police and medical emergency services. The service was initially set up in the City of Winnipeg Signals Building on James Avenue East and later moved to the new Civic CentreThe Civic Centre Complex consists of the Council Building and Administration Building located at 510 Main Street and the Public Safety Building and Civic Parkade located on Princess Street.

X Close in 1971, the service was available to all residents of the unified City of Winnipeg. 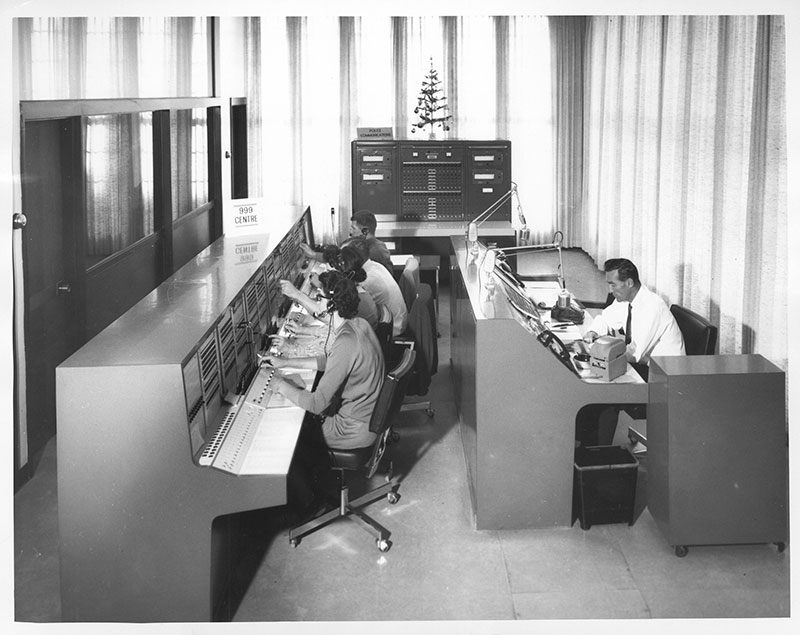 This design was selected in 1969 by the R. M. of Charleswood for a series of street signs to be positioned at various entrances to the Municipality. The initial plan was to erect these signs at Roblin Boulevard and Chalfont Road, Grant Avenue and Chalfont Road, and Wilkes Avenue and McCreary Road. Since the Metropolitan Corporation of Greater Winnipeg (Metro) had jurisdiction over these locations, the Municipality worked with Metro’s Streets & Transit Division when designing the sign and gaining approval for the plan.

The tree encircled by the letter "C" references one of Charleswood's distinguishing features, its wooded areas. According to a speechCharleswood subject files contain a copy of Mayor Arthur Moug's speech entitled "Opening Centennial Year", which includes stories of early settlers to the area (A1547 File 1352).

X Close given by Mayor Arthur Moug on December 31, 1966, the dense woodlands particular to the area inspired the name "Charleswood" - "Charles" having been chosen for one of the Municipality's first Council members, Charles Kelly. Other sources suggest the Municipality was named for the Parish of St. Charles. 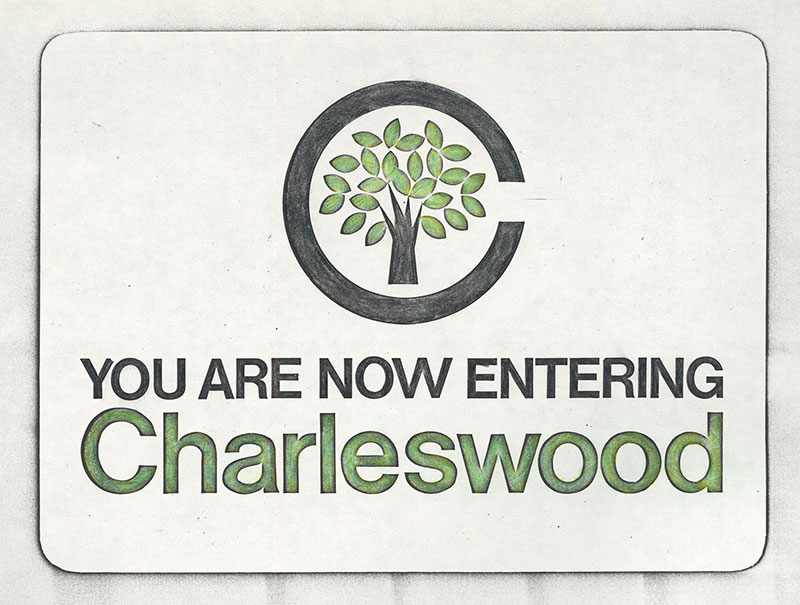 In 2007, the Archives received a substantial collection relating to Winnipeg’s music history – in particular, jazz, blues and big band music from the late 1890s to 2007.  The collection was donated by local musician, teacher, writer and music historian, Owen Clark. Clark accumulated the material while working on his book, Musical Ghosts: Manitoba’s Jazz and Dance Bands, 1914-1966.

This photograph, taken in the late 1940s, features Louis Armstrong and his band at the Don Carlos Casino, 650 Pembina Highway. While the Casino burnt down in 1950, Carlo “Charlie” Mazzone continued to play an important role in the music business in Winnipeg, owning a variety of venues that offered Winnipeggers dining and dancing accompanied by live music. 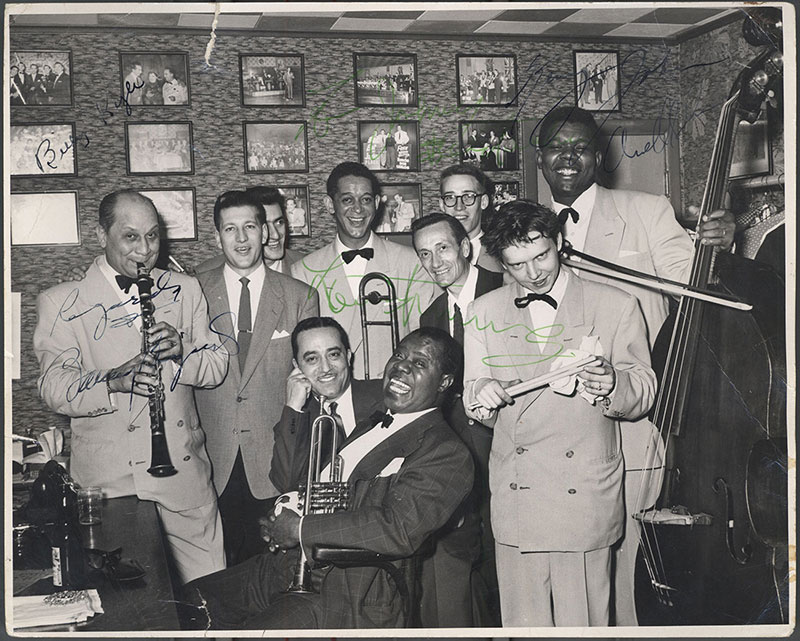