The redevelopment of these lands presents an unparalleled opportunity to create something unique, in one of Winnipeg's greatest downtown neighbourhoods. Over the next couple of years, Winnipeggers will witness the demolition of these two iconic structures. Soon after, a new skyline will evolve. 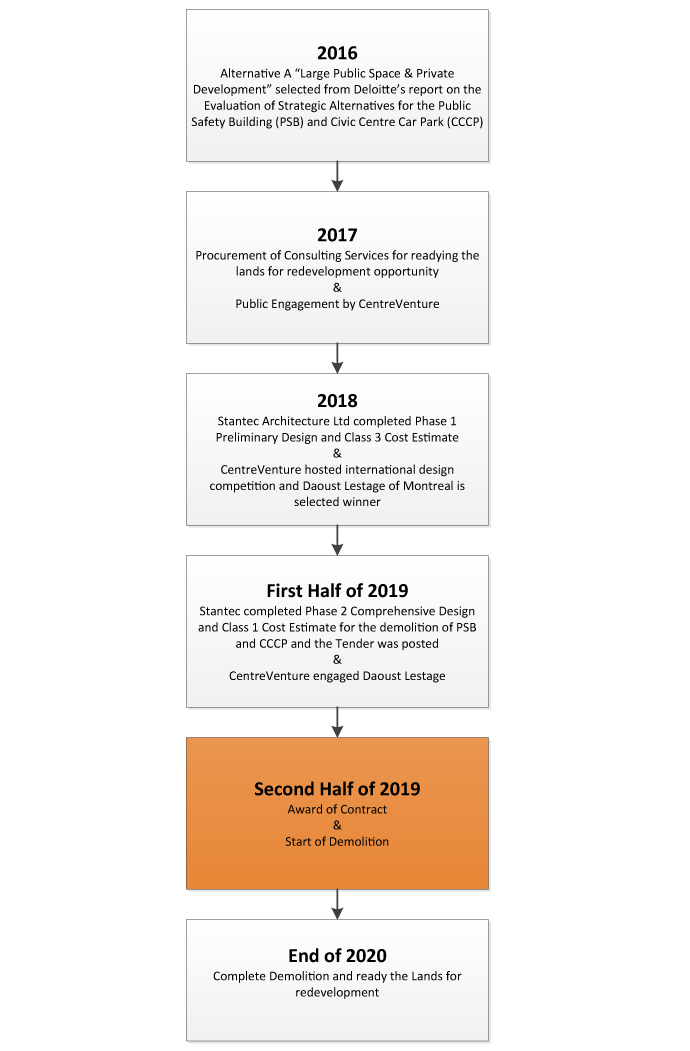 In December 2015, Deloitte released a report on the evaluation of strategic alternatives for the Public Safety Building (PSB) and Civic Centre Car Park (CCCP) which provided a clear rationale for the demolition of both structures. The Deloitte report indicated that the restoration of the PSB would not better meet the needs of the City, would not better contribute to downtown revitalization priorities, and would not provide value above and beyond other alternatives. These limitations, along with an associated high cost of restoration, combined to make a strong case in favour of demolition.

On April 12, 2016, the Standing Policy Committee on Property and Development, Heritage, and Downtown Development (SPC-PD) selected Alternative A "Large Public Space & Private Development' based on the findings of Deloitte's report, subject to public engagement, and upon completion of the public engagement, report back to Council for approval. SPC-PD also recommended that the City develop an Implementation Plan for Alternative A, inclusive of feasibility analyses, cost estimates, and scheduling requirements and upon completion of the plan, the City report back to Council for approval.

CentreVenture Development Corporation was asked to lead the public engagement and redevelopment process for the properties (known as Market Lands), along with the City's Planning, Property and Development Department. In May 2017, CentreVenture released the Market Lands Guiding Aspirations Report.  The Urban Design Framework for Redevelopment of The Market Lands document was published on March 21, 2018. From July to December 2018, CentreVenture conducted an international design competition to choose a design team and architectural concept for the southern parcel of the Market Lands site. Daoust Lestage of Montreal was selected winner. They will work with CentreVenture and community partners and construction is planned to commence in late 2020.

On July 19, 2017, Council approved funding to procure design services and prepare a Class 3 cost estimate for readying the PSB and CCCP for redevelopment, inclusive of demolition of both building assets should such be required as part of the future redevelopment plan.

In early 2018, following the completion of a public Request for Proposal process in accordance with the City of Winnipeg Materials Management policy, Stantec Architecture Ltd. (Stantec) was awarded a consultant contract to complete the design and cost estimate for Readying the Lands of the former PSB and CCCP in two phases. The first phase included preliminary design and provision of Class 3 Cost Estimate. Based on the Class 3 Cost Estimate, $12.1 million was determined for this project. The second phase, which would include comprehensive design and provision for a Class 1 Cost Estimate, would only begin once Council provides approval.

On September 20, 2018, Council approved Alternative A, "Large Public Space and Private Development" from Deloitte's "Evaluation of Strategic Alternatives for the Public Safety Building and Civic Centre Car Park" report for implementation as a redevelopment plan for the former PSB and CCCP lands. The City was authorized to obtain a Class 1 Cost Estimate for readying the subject lands for redevelopment.

In March 2019 the City issued a public Request for Qualification to solicit contractor interest in the building demolition project.  Shortlisted (qualified) proponents were invited to bid for the demolition contract that was tendered in May 2019. Upon contract award, it is anticipated the demolition work would tentatively commence in September, 2019 and, likely conclude in late 2020.

Why are the Public Safety Building and Civic Centre Car Park being positioned to be demolished?

In April 2016, Council resolved to demolish the former Public Safety Building and Civic Centre Car Park and embark on a public engagement process for the redevelopment of the lands they occupy.

As a result of findings in an engineering report by Croiser Kilgour & Partners Ltd. that was reviewed in August 2012 by senior management, the Chief Administrative Officer and the Winnipeg Parking Authority determined that the Civic Parkade at 171 Princess Street must be closed on August 24, 2012. Due to the age of the building, the City had been monitoring the parkade on an ongoing basis to ensure its structural integrity and closed the parkade as a precautionary measure.

It was recommended that the Public Safety Building be demolished due to significant structural limitations. As well, the design of the building presents a number of challenges, including:

Members of the community are concerned about losing the architectural elements of the Public Safety Building and Civic Centre Car Park as a result of demolition. What does the City have to say about this?

The façade of the Public Safety Building is an example of the Brutalist style of architecture defined by its deep-finned mullions, clear expression of structure, and local Tyndall stone cladding, which establishes a visual connection to the neighboring City Hall complex and is reminiscent of the style's more typical exposed and textured concrete. Although the Public Safety Building embodies heritage values, an adaptive reuse of the structure was not deemed to be feasible.

Why are we calling the project "Market Lands"?

The project has been renamed "Market Lands" to reflect the important history of the site.

When will demolition take place?

Demolition is planned to begin in September 2019 and the process is estimated to take10 months to complete.

What type of demolition is planned? Will there be an explosion?

A safe and methodical demolition is planned and it is not expected to involve the use of explosives. The building and parkade will be effectively deconstructed piece by piece, to preserve the materials for re-use, and to protect neighbouring businesses and residents during the demolition process. The parkade will be demolished first to free up working space, followed by the Public Safety Building.

The demolition will be environmentally-sensitive. Can you elaborate on what this means?

A minimum of 95% of building and site materials will be salvaged for re-use or recycling. These materials will include: limestone, concrete, and metals such as steel and copper. Demolition activities will be performed in an environmentally responsible manner. While the demolition itself will not achieve LEED certification, the work will be done in such a way that achieves LEED points that would support a potential LEED Silver certification of future site development.

Where can I learn more about the design and development plans for Market Lands?

Why were no plants installed in the court yard flower beds in 2019?

Preparation work for the demolition will occur in the summer, which will include the erection of a fence around the property. As a result, City staff would not be able to gain access to maintain the flowers.