The provision of transportation systems has a large influence on the form of the built environment and people's quality of life. The City of Winnipeg aims to improve residents' quality of life by making our city a place where moving around either on foot, by bike or via transit is safe, convenient and accessible. Our goal is to ultimately make walking, cycling and public transit the preferred transportation options for Winnipeggers.

A key underlying goal of the TMP is to expand the range of travel options that are available to residents, workers and visitors, and to ensure that people are not dependent on one single mode. Specifically, the TMP directly calls for the development of the Pedestrian and Cycling Strategies.

The Pedestrian and Cycling Strategies include a long-term vision for walking and cycling in Winnipeg, supported by seven overarching goals and a series of six strategic directions with supporting key directions and actions. In recognizing the significant environmental, economic, social and public health benefits of active transportation, the City of Winnipeg is following the lead of other major cities in improving facilities and programs for walking and cycling. For example, the City's capital budget for active transportation has risen ten-fold since 2006, from $300,000 to more than $4 million. Additionally, as part of the City's 2010 capital works program, an additional $20 million was allocated to implement several additions to the City of Winnipeg active transportation network. As of September 2017 several of these “walk-bike” projects have been initiated, providing ample opportunities for pedestrians and cyclists alike to help shape the design and operation of these exciting initiatives.
According to Statistics Canada, in 2011, the dominant mode of travel in Winnipeg was the car driver (69%), followed by commute trips using public transit (15%), as a car passenger (7%), walking (6%), bicycle (2%) and other modes (1%). 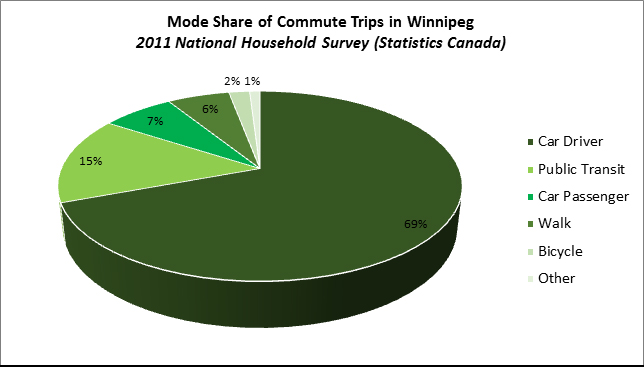 Active transportation also plays an important part in the success of Rapid Transit. 'Stage 1' of the Southwest Transitway Project saw a variety of cycling and walking paths built throughout the City, including:

Winnipeg Transit currently operates an extensive network of 89 bus routes throughout the city, with a fleet of approximately 585 buses. In 2006, consistent with the City's commitment to continued service improvements and sustainability, the City of Winnipeg began a multi-year comprehensive transit improvement program that involved:

These state-of-the-art electric buses are in daily operation on the route 20 Academy-Watt; a 40-kilometre, two-hour route starting at Winnipeg Richardson International Airport, making its way through the city centre, to East Kildonan, and returning to the airport. The fully electric, zero-emission vehicles are powered by energy that's stored in rechargeable batteries rather than fossil fuels – so instead of an internal combustion engine, it's propelled by an electric motor (which also makes them very quiet). These zero-emission battery-electric propulsion transit buses are expected to significantly reduce greenhouse gas emissions and smog-causing air contaminants, particularly in Manitoba, where the electrical grid is highly renewable and fed almost entirely through hydroelectric power. The use of electric propulsion buses in Winnipeg, then, is expected to have a substantial impact on greenhouse gas emissions, with an estimated reduction of 160 tonnes of CO2e, per bus, per year.

To learn more about this demonstration project, you can watch this Red River College (one of the project partners) video on the new Zero Emissions Electric Transit Buses:

If you'd like more information about sustainable transportation, here are some helpful resources: