Better known as public washrooms or restrooms, comfort stations became a part of Winnipeg’s infrastructure in 1907. By 1917, the City had 5 Comfort Stations staffed by 16 attendants:

Despite the obvious need, these facilities were not always welcome additions to the built environment. In 1914, Mayor Deacon was petitioned

by business owners opposed to construction of the Fort and Garry street Comfort Stations. They were concerned that property values would decline.

The City’s 5 comfort stations were gradually closed and demolished. The last to go was the Garry Street facility, which closed on April 30, 1979. 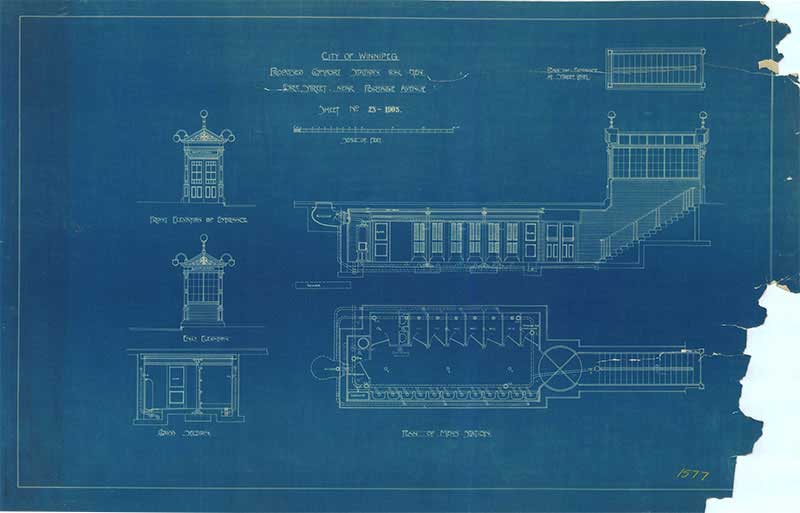 On August 17, 1876 – a civic holiday having been declared – Council held a ceremony to mark the start of construction of Winnipeg’s first City Hall. At the ceremony, a “casketThe metal box placed in the cornerstone of the first City Hall. Today we would call it a time capsule.

X Close” filled with money, photographs, newspapers and documents – as well as a bottle 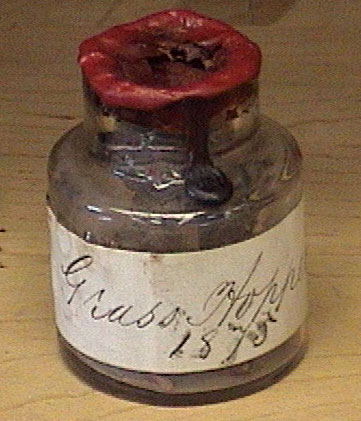 X Close of grasshoppers and a box of wheat salvaged from a field savaged by grasshoppers – was placed inside the cornerstoneA stone with the date carved on its surface and laid at a ceremony to mark the start of construction of a significant building.

X Close of the new building. Unbeknownst to those present, Council had preserved a specimen of the infamous Melanoplus spretusAmong several century-old samples of grasshoppers contained in a glass jar in the City of Winnipeg Archives, one is of singular interest. In 1970, Dr. R. L. Randell of the University of Saskatchewan had identified this particular specimen as Melanoplus spretus, better known as the infamous “Rocky Mountain Grasshopper”, scourge of the North American prairies and plains. By the turn of the century, the species had for unknown reasons gone extinct! The last specimen was collected in 1903. Because identification based on morphological features can at times be misleading, the laboratory at the University of Regina in 2010 undertook an analysis of its somewhat degraded mitochondrial DNA. Researchers also wanted to determine its nearest kin in their ongoing effort to understand what led to its spectacular demise. There was sufficient DNA sequence to confirm that this specimen was indeed the Rocky Mountain Grasshopper. While researchers now know that its closest relative is another species of the genus Melanoplus, the reason for the Rocky Mountain Grasshopper’s precipitous disappearance remains a mystery.

In 2010, DNA extracted from this grasshopper confirmed that the remains were indeed those of a Melanoplus spretus. The reason for its disappearance remains a mystery. 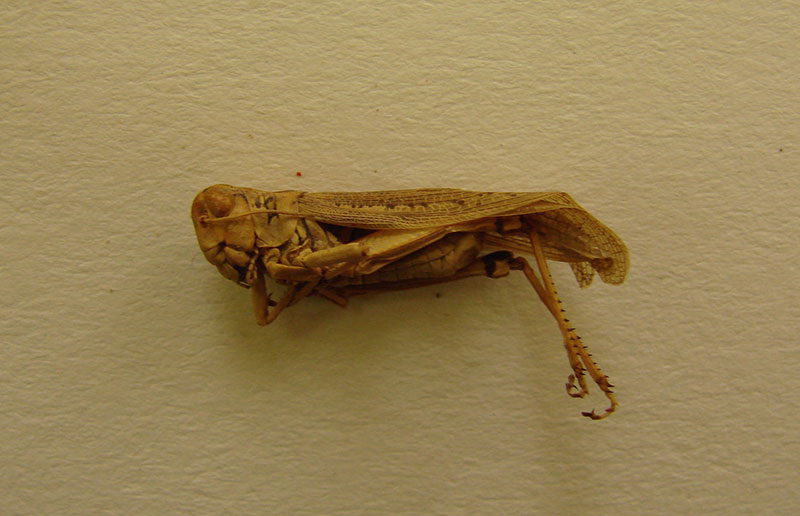 X Close Bridge was built to ensure that the railway route under consideration in Ottawa would benefit the City of Winnipeg. To reinforce the city’s request that the Pembina Branch “cross” at Winnipeg, Mayor W. N. KennedyWilliam Nassau Kennedy came to Red River in 1869 with Colonel Wolseley. He served as the second Mayor of Winnipeg (1875-1876).

X Close was dispatched to Ottawa in 1875. His report

to Council suggests a favorable response on the part of the Dominion government, and construction of the Louise Bridge began in 1880 with the laying of a cornerstone on August 9.

to Council. By 1904, the bridge was no longer used by the CPR. It was widened and rebuilt in 1911, though the original stone masonry piers remain today. 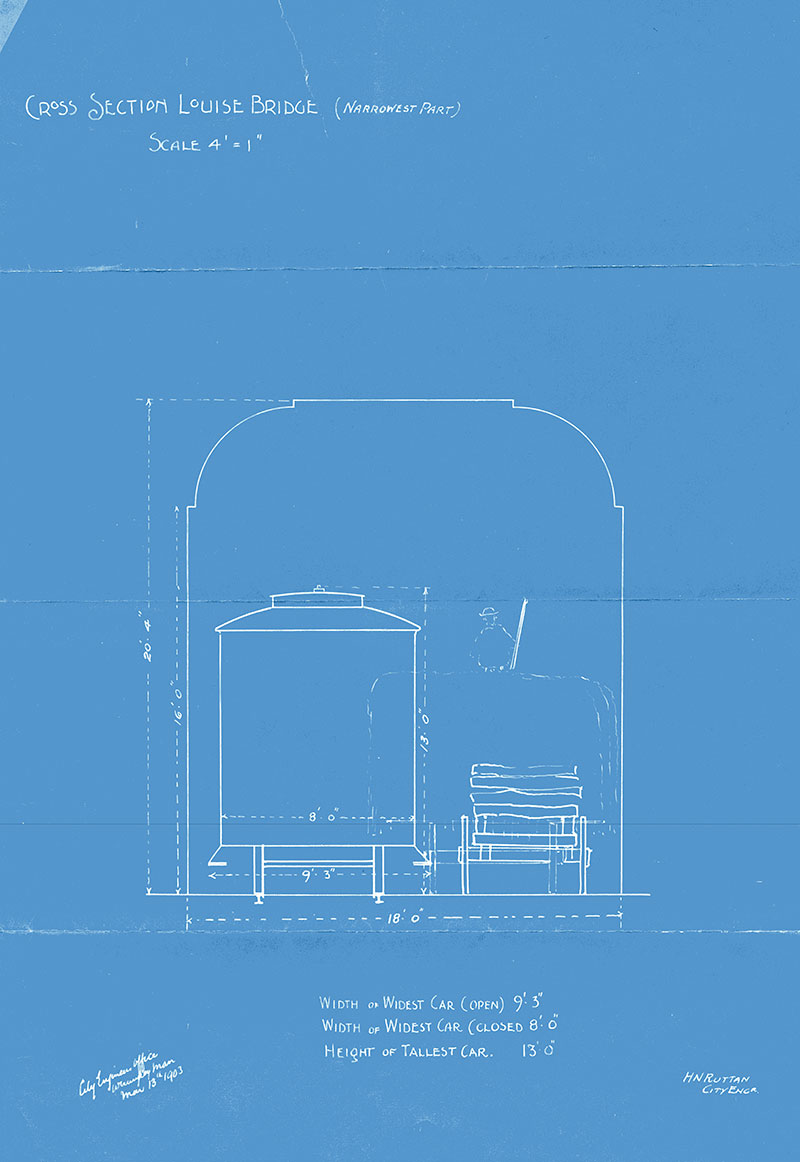 Canadians were greatly affected by World War I

, an event that transformed the nation. Throughout the conflict, local governments were called upon to provide leadership on the home front, raise funds for the war effort, maintain services in the absence of experienced personnel, and promote recruitment 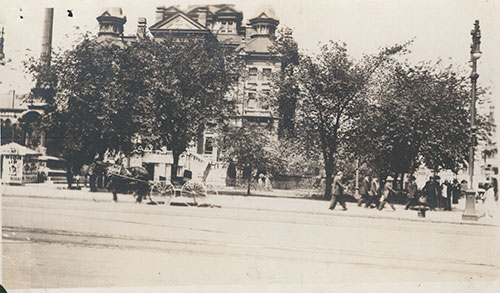 As civic employees began to enlistManitoba Free Press, Wednesday, December 15, 1915. Many City Employees Enlist. The “recruiting fever” very prevalent of late in the city hall has been successfully doctored by the 101st Battalion. During the past week, the epidemic has claimed a number of the most valuable young men employed by our city. From the city hall itself, the fever spread to the city annex where it secured another victim. The proximity of no. 1 Fire hall to the “danger region” was the reason of its infection with the disease, and thus the city lacks a fireman or two. The disease has not yet been entirely wiped out.

X Close in 1914, municipal councils considered how to reinstateManitoba Free Press, Friday, July 16, 1915. Civic Employees Enlist. Two more city employees have joined the overseas force. They are C. Davie and H. Thomas, health department teamsters. They will be accorded the usual guarantee when the head of the department reports on their services (Note: only C. Davie returned).

X Close and care for returned soldiers – in all, Winnipeg had about 700

employees on active service during the war, nearly half the civic work force at that time.

When soldiers began to return home at the end of the war, Winnipeg’s Committee on Finance requested reports 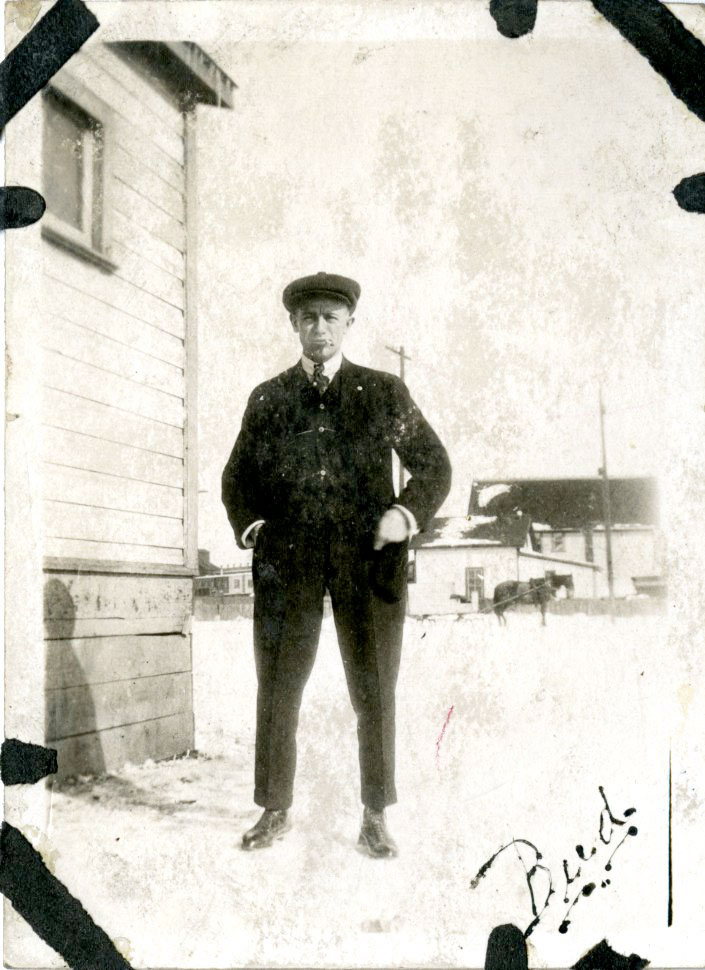 For many years, the right to vote in Winnipeg was reserved for adult male owners of city property. In 1887, women in Manitoba who met established qualificationsCurrent information on voter eligibility.

X Close. This right was limited briefly in 1906 when an amendment to the Municipal Act changed the wording for qualifications of electors from “male or female” to “men, unmarried women or widows”. The 1906 amendment was repealed in 1907, and all qualified women were again able to vote in municipal elections.

X Close". Despite oppositionManitoba Free Press, Thursday, November 21, 1940. Delay Returns, Citizens will cast Votes on Franchise. The referendum on the proposed extension of the civic franchise to all resident British subjects of 21 years, regardless of property qualification, will take place at Friday’s civic election, but the vote will not be officially reported to the city council until after the trial of the action started in king’s bench court Saturday by James Jenkins and D. E. Wright, Winnipeg ratepayers, to quash the by-law under which the referendum was taken. Order to this effect was made Thursday by Mr. Justice Robson.
Like all other civic election ballots, the referendum ballots will be counted at the polls before the results are brought to city hall. As scrutineers are entitled to have these figures, the unofficial result of the referendum will be known Friday night. Mr. Justice Robson, who while refusing an interlocutory injunction to prevent the vote being taken, did grant a restraining order against the Winnipeg city clerk prohibiting him from officially declaring the result of the vote to the mayor or council. “The case justifies consideration by the court of appeal, and possibly by the Supreme Court of Canada,” the judgment declares.
His lordship says that he is doubtful whether section 243 of the city charter was ever intended for such a use as it is being put to by the city council in this instance. But, his lordship points out, all preparations having been made for taking the referendum on Friday, he does not think that the court, at this late stage, should interfere with the voting machinery. W. C. Hamilton, K.C. appeared for the plaintiffs, with Jules Prudhomme, K.C. and W. Fraser representing the city.

X Close, the question of extending the civic franchise was put to a vote in a referendumAn official vote on a specific issue.

X Close on November 22, 1940. While the referendum passed, the amendment to the City Charter required to authorize the change was delayed by early prorogationThe end of a session of the legislature.

X Close of the provincial legislature. A bill to amend the City Charter was finally introduced in 1942, and the first civic election with resident adult suffrage in effect was held on November 27, 1942. 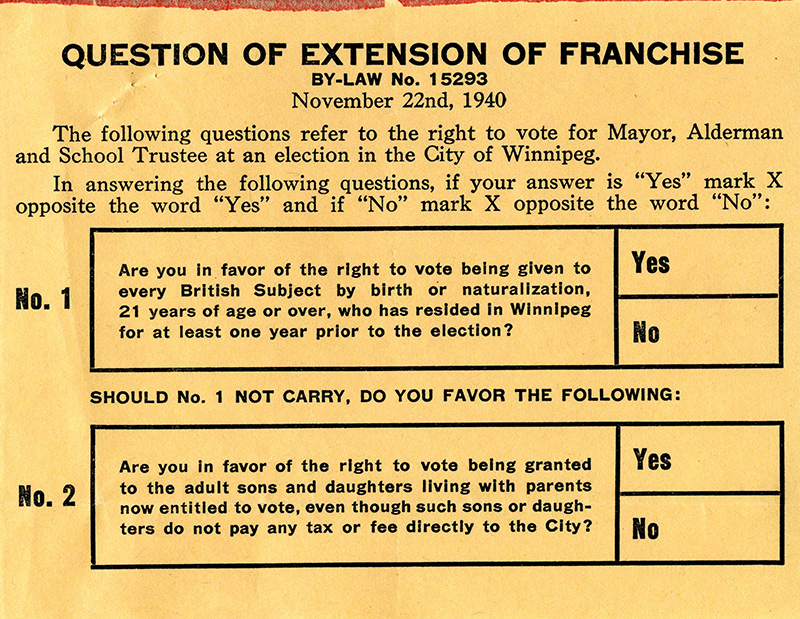 Taken on September 5, 1900 from the tower at City Hall, this photograph shows the present site of Red River College's Princess Street campus. Campus design included stabilization of five historic building facades along Princess Street: right to left from the corner of Elgin Avenue and Princess Street, the Utility Building (Winnipeg's first Grain Exchange) at 164 Princess; the Exchange Building II at 160 Princess; the Harris Building (Hochman's) at 154 Princess; the Bawlf Block at 150 Princess; and the Drake Hotel (Benson Block) at 146 Princess.

When this photograph was taken, Princess Street was a busy commercial area. The buildings in the block between Elgin and William avenues were built between 1882 and 1898 and over the years housed a variety of mercantile operations including Griffin & Douglass 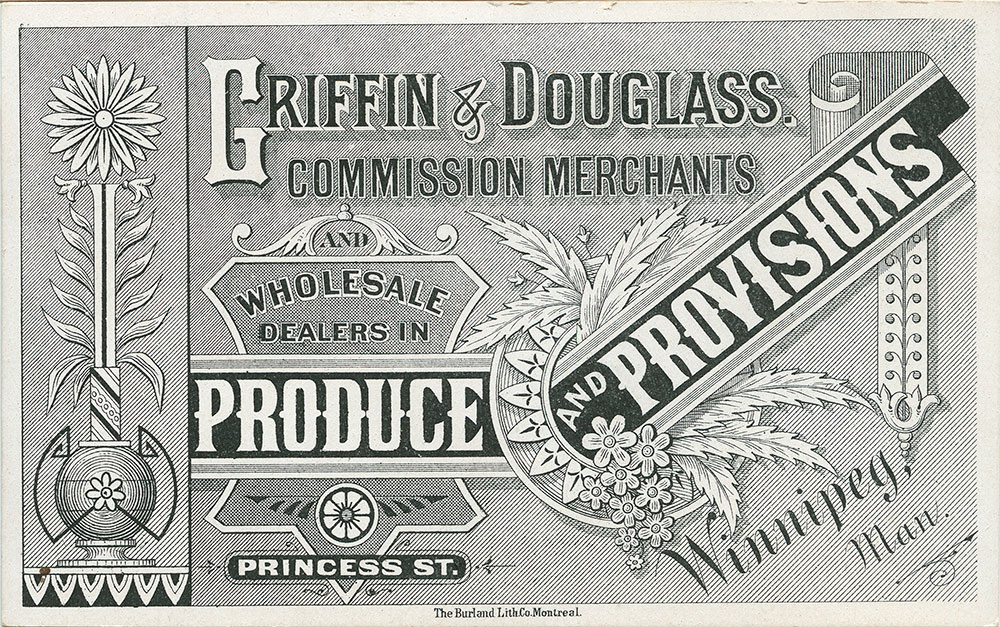 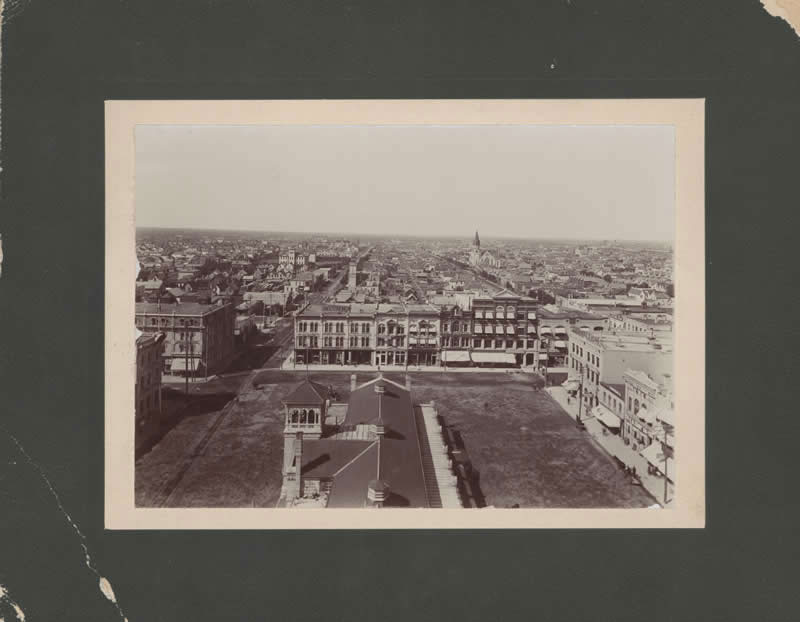