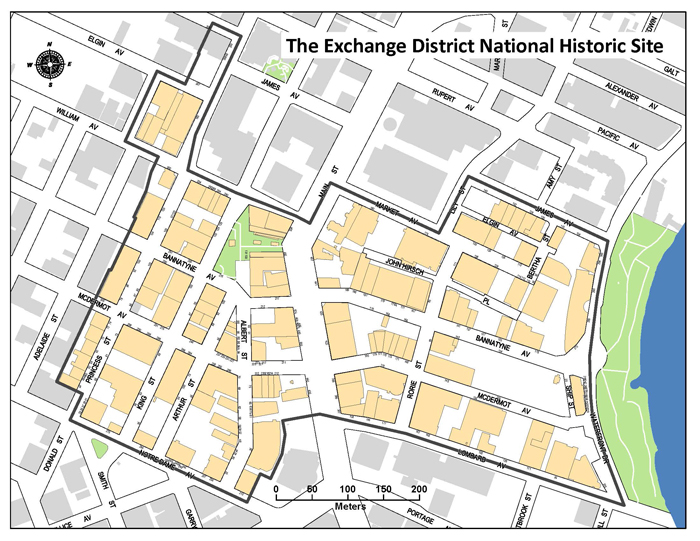 Located just north of Canada's celebrated corner of Portage and Main, the 20-block Exchange District National Historic Site encompasses over 100 turn-of-the-century buildings that display an innovative and functional approach to period architecture. Massive stone and brick warehouses, elegant terra-cotta-clad skyscrapers, narrow angled streets and covered alleys recall the time when this district was the economic gateway to Western Canada and commercial centre of Winnipeg. The First World War, the Depression and other changes eventually eroded its role, leaving the district to age virtually intact.

In the late 1800s, the Canadian Pacific Railway helped to define Winnipeg as the "Gateway to the West", transforming the once-fledgling town into a prosperous, cosmopolitan community. Thousands of settlers stopped in Winnipeg before heading further west to claim their homesteads. This immigration boom established Winnipeg as the agricultural centre of the country, leading international grain markets with over half of the world's wheat sales during the 1920s.

By 1905, Winnipeg was the fastest growing city of its size in North America, gaining a new nickname – “Chicago of the North”. The City's Exchange District, named for the Winnipeg Grain and Produce Exchange founded in 1887, became Winnipeg's economic hub, generating huge fortunes for the businessmen of the day.

In 1911, there were twenty-four rail lines converging on the City, establishing it as one of the largest rail centres in the world. CPR's main and spur lines serviced more than 200 wholesale businesses and warehouses centred in the Exchange, creating an iron web throughout the District. Today, the names of these turn-of-the-century grocery and dry goods wholesalers can still be seen, etched or painted on buildings throughout the area along with remnants of the rail lines that led to their loading docks.

The Exchange District, with its opulent theatres and cabarets, became the entertainment and vaudeville showcase for Western Canada, drawing such legends as Buster Keaton, Charlie Chaplin and the Marx Brothers. The renowned Pantages Theatre on Market Street stands today as one of Canada's finest post-1900 vaudeville venues.

The Exchange also became the city's publishing core. By the end of World War I, the area boasted three daily newspapers located on McDermot Avenue. Winnipeggers often gathered outside the offices of the Manitoba Free Press, the Winnipeg Telegram and the Winnipeg Tribune to read the latest news posted on the wall or shouted through megaphones from office windows.

It was from these walls and windows that Winnipeggers first heard news of the onset of the First World War and the opening of the Panama Canal, events that were to slow the growth of the city and alter its economic development. A sharp drop in wheat prices and the end of the immigration boom to Canada resulted in a significant slowdown in retail and wholesale activity. Changes in freight rates after 1920 destroyed Winnipeg's previous transportation cost advantages. By the mid-1920s, firms were forced out of business and the glory years of the Exchange District were over.

Today, the Exchange District has re-emerged as a vibrant place to work, live, play and celebrate Winnipeg's architectural heritage.

On September 27, 1997, federal Minister of Canadian Heritage, the Honourable Sheila Copps declared Winnipeg's Exchange District a National Historic Site, one of the country's largest designated historic districts. The bronze plaque for the Exchange District National Historic Site is located at the north end of Old Market Square near the corner of King Street and William Avenue with the following inscription:

This remarkable group of commercial buildings vividly illustrates Winnipeg's transformation between 1878 and 1913 from a modest pioneer settlement to western Canada's largest metropolitan centre. The district's banks, warehouses, and early skyscrapers recall the city's dominance in the fields of finance, manufacturing, wholesale distribution and the international grain trade. Designed by a number of well known architects, the buildings of the Exchange District reflect an approach to architecture that was innovative, functional and stylish. The First World War and the Great Depression contributed to the end of Winnipeg's spectacular boom era, leaving the district virtually intact. Through the efforts of dedicated citizens since the 1970s, the Exchange District has been preserved as a distinctive legacy from a formative period in Canada's economic development.