A power outage is impacting services at Millennium Library and permitting and inspection services. The library remains open for in-person visitors. Updates will be posted online as services are restored.

Discoloured water can result from routine operations such as water main breaks or water main cleaning.

If you have concerns about your water other than discolouration, please refer to the Water Quality FAQs.

Expand all | Collapse all

What should I do if my water is discoloured?

We recommend that you do not use discoloured water for any purposes that require clean water, such as for drinking, preparing food and beverages, or laundry. Discoloured water may contain metals (e.g. manganese) that can have health effects if consumed in large amounts or over an extended period of time. In addition, discoloured water does not taste, smell or look pleasant, and it can stain clothes.

To check if discoloured water has passed:

Visit MyUtilityInfo to see if there is nearby water main activity that has caused the discoloured water.

Why is my water discoloured?

Discoloured water is from a change in flow of water in the system. This can cause sediment in the water pipes to loosen and be released into the water. The change of flow may be caused by activities such as water main breaks, firefighting or water main cleaning. Visit MyUtilityInfo to see if there is any nearby water main work.

How long does discoloured water last?

What action do you take when I contact and report discoloured water?

How many calls of discoloured water have there been over the years?

In 2009, 311 was launched in Winnipeg and it marked a change in how we collected statistics on discoloured water reports. It was also launched before the new water treatment plant was brought online. Once the treatment plant was brought online in December 2009, there was an increase in discoloured water calls. We worked with consultants and they pointed to a buildup of mineral and organic material that was reacting with the higher quality of water and causing the discoloured water. We followed their recommendations to minimize the amount of disturbances customers would experience until the water quality stabilized. We saw a decrease in reports in 2011.

Here is a chart of calls about discoloured water over the past few years, including calls up to to December 31, 2021.

Why does discoloured water happen more often in the summer?

In the spring and summer, there are more events that change the flow of water. This includes activities such as water main renewals, water main cleaning and connecting new water mains.

Cause of Discoloured Water

What caused the increase in discoloured water?

Elevated levels of manganese were the major cause of the significant increase in reports of discoloured water.

Manganese is a naturally-occurring element that can be found universally in the air, soil, and water. It is an essential nutrient for humans and animals, with humans getting most of their manganese through food.

Do you monitor for manganese in tap water and what are the levels?

Yes. We test for manganese in tap water on a monthly basis at six locations in the distribution system. The chart below shows the average manganese levels tested at these locations from 2009 to present. 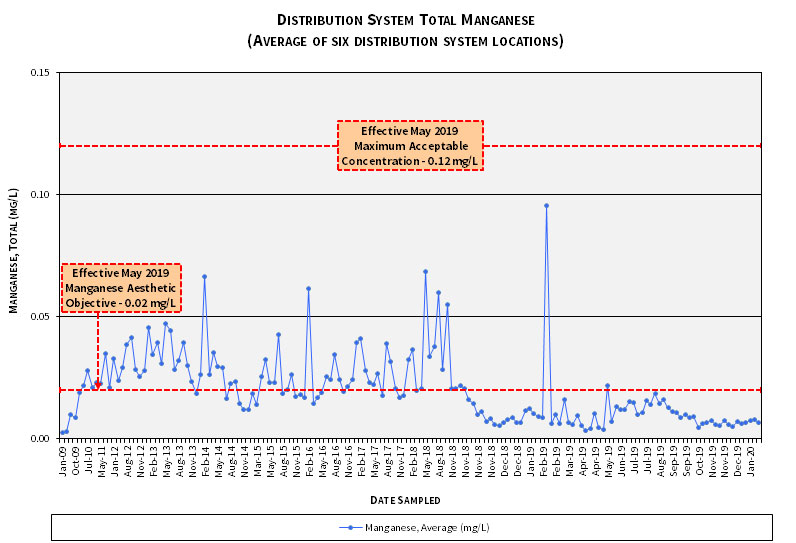 What caused the levels of manganese to increase?

Although manganese levels have risen over the years in Shoal Lake, Winnipeg's water source, the primary source of the increase in manganese is ferric chloride, which was initially used in one of the key treatment processes (coagulation) at the drinking water treatment plant. In the fall of 2018, we switched to a new coagulant, ferric sulphate, which contains less manganese. The switch was one of the recommendations from the consultant to reduce the levels of manganese.

Why did we use ferric chloride?

Is there a concern about manganese in the tap water?

What have you done to reduce the levels of manganese?

The consultant has recommended a number of short and long term measures to reduce the level of manganese.

We have completed all of the following recommendations:

We continue to operate the water distribution system with the least amount of disruption (e.g., minimizing fire hydrant use by City forces and contractors, decreasing disruptions in flow direction and velocity).

Once all these measures have been implemented, will discoloured water be eliminated?

Citizens should expect that even after all the measures are in place, there will continue to be incidents of discoloured water from time to time, as is common in most public water systems. A change in the rate of flow of water in the distribution system during routine operations (e.g., turning valves on and off, opening fire hydrants, repairing water main leaks) can cause sediment and minerals in the water pipes to loosen or dissolve and be released into the water.

Is discoloured water safe if I drink it?

We recommend that you do not use discoloured water for any purposes that require clean water, such as for drinking, preparing food and beverages, or laundry. Discoloured water may contain metals (e.g. manganese) that can have health effects if consumed in large amounts or over an extended period of time. In addition, discoloured water does not taste, smell or look pleasant, and it can stain clothes.

What tests have you done to ensure the safety of Winnipeg's water?

Winnipeg's water is tested each step of the way, from Shoal Lake to the tap, to ensure safe, high-quality drinking water. We use nationally accredited laboratories for the tests and we do more sampling than required by our Operating Licence, including more bacteria and chemical testing. We have tested samples of discoloured water for:

What have the discoloured water tests shown?

Our water continues to comply with the requirements of the Operating Licence issued by the Provincial Office of Drinking Water, with Manitoba regulations, and with Guidelines for Canadian Drinking Water Quality. Our test results to date have shown that even when water is significantly discoloured, there is:

We continue to update the provincial Office of Drinking Water and the regional Medical Officer of Health on our findings.

Is there a concern about iron in the tap water?

Test results suggest that manganese is the primary contributor to discoloured water, although some discoloured water samples contain levels of iron higher than the aesthetic objective of 0.3 milligrams per litre. Test results at the water treatment plant show that iron in the distribution system is not coming from the plant. The consultant has suggested that iron at the tap is coming from deposits in the distribution pipes, which primarily originate from iron water mains. Testing shows that iron levels have been decreasing over time and that iron is not a major factor at this time.

Iron is an essential element in human nutrition. Iron in quantities greater than 0.3 milligrams per litre (mg/L) in drinking water can cause an unpleasant metallic taste and rusty color, and can stain laundry or household items. Currently, the guideline for iron is set as an aesthetic (e.g., colour, odour, taste) objective in the Canadian drinking water quality guidelines. A maximum acceptable concentration to protect health has not been set. Although ingesting large quantities of iron in any form (e.g., supplements) can be harmful, there is no evidence to suggest that concentrations of iron in Winnipeg's drinking water (discoloured or otherwise) would pose a risk to human health in the short or long term.

What should I do if my laundry has been stained by discoloured water?

If you notice rust or iron on clothes when taking them from the washer:

There are a number of commercial stain removing products available that can remove rust stains (e.g., White Brite, RoVer Rust Remover, Rit Rust Remover, Red-B-Gone, Whink Rust & Iron Stain Remover, Super Iron Out Rust Stain Remover). Check to see if the removers are intended for white or colourfast fabrics only. Handle with care and use carefully according to the manufacturers' direction. Rinse the clothes thoroughly after treating with a stain remover.

There are also a number of eco-friendly stain removing alternatives.

Can I get reimbursed for running my tap to clear the discoloured water?

No, because the cost is low and the discoloured water can be used for other purposes (e.g., watering plants or the lawn). A typical kitchen tap running for 10 minutes will use approximately 60 - 80 litres of water. This will add 28 to 37 cents to a utility bill, based on the current charge for water and sewer services at 4.6/10 of a cent per litre. The water is usually clear after running the tap for a few minutes.

Can I make a claim for damage caused by discoloured water?