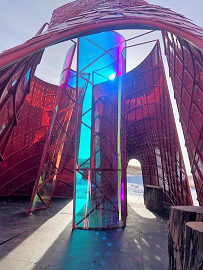 Rainbow Butterfly is a shelter, and like all Indigenous women and gender-diverse people is a manifestation of love, peace, and protection. She represents the energy and spirit of a mother, grandmother, and daughter, standing strong at her temporary home in Kildonan Park.

Named in a ceremony, her space is intended to educate and remind the public that Indigenous women, girls, and gender-diverse peoples whose minds, bodies, and spirits are sacred.

The inner space is intended as a place of reflection and education: it is surrounded by panels inscribed with the 231 Calls for Justice, and family members are invited to write the names of victims on pieces of cloth to tie to the rod structure. But it’s also a welcoming space for gentle reconciliation.

Kildonan Park has had the honour of providing a temporary location for her until the vision of her fulsome home can be seen through.  Rainbow Butterfly’s journey has been true to an Indigenous women’s experience, of feeling out of place, and longing for a home.  She has also recently become subject to graffiti and damage, which we see as abuse.

The City will work with the collective voices to create a permanent space as envisioned by the community, and to keep her safe, we ask that Winnipeggers appreciate her beauty and speak out against any mistreatment toward Rainbow Butterfly.

If you are a survivor, family member, or advocate of MMIWG2S+ and would like to book time at Rainbow Butterfly please contact indigenousrelations@winnipeg.ca

We would like to extend our gratitude to Angela Lavallee, Sandra DeLaronde, Leslie Spillet, and all that participated in the birth of Rainbow Butterfly as she is a reminder of what the love and power of Indigenous feminine energy look like.

Rainbow Butterfly – Birth of a Vision

As described by creator Angela Lavallee

In 2018, Angela Lavallee was part of a collective of students that attended the University of Winnipeg who were taking a “Non-Violent Social Change” class with Karen Ridd.  As an Indigenous woman, survivor of violence and MMIWG2S+ family member I initiated an action that focussed on honouring Indigenous Women, Girls, Babies and Two-Spirited (MMIW GB2S). After some collaborative discussions with some family members of MMIWG2S, Indigenous women and survivors, and pondering over numerous ideas, we were led to the vision of a “Red Dress Warming Hut”. This initially was inspired by Sandra DeLaronde after a conversation with respect to having an art installation piece presented at the forks.

It is believed that this vision will help bring awareness of this national crisis. It was amazing to have some of my classmates join and after our school term ended three of us continued with the vision. We planned on funding raising, however; we were blessed with an opportunity to submit a proposal to WAGE through Manitoba Moon Voice Inc.

The students and community wanted to include the story of the MMIWG2S on the Nestaweya River Trail (formerly the Red River Mutual Trail) at the Forks.  Her name was gifted in ceremony the essence of her is community, ceremony, and love. It took three years to complete and struggled a final space for her to be.  Unfortunately, she too had to overcome the reality of "finding a permanently safe space”.

The hope of what she brings