Residents in Transcona will benefit from further improvements to east-west connections through the former City of Winnipeg Public Works Yard and the new Park City Commons development.

EdgeCorp Group, developers of the Park City Commons, is working in a joint venture with the City on the construction on two additional lanes on the north side Transcona Boulevard. When completed the four-lane divided roadway will extend approximately 750 metres west of Plessis Road and 140 metres onto Kildare Avenue West.

The remaining path work will be completed on the north side of Transcona Boulevard west of Plessis Road in 2018, as well as remaining island and intersection work.

Ahead of construction in mid-July to late October 2017, the public had an opportunity to talk to City staff and the project team about plans and construction impacts at an Information Session held Wednesday, June 28, 2017, 4:00 p.m. to 7:00 p.m., Park City West Community Centre, 115 Sanford Fleming Road.

If you have inquiries or require alternate formats or ASL interpretation to participant, please contact City-Engage@winnipeg.ca.

Building on the release of OurWinnipeg's Complete Communities document, Winnipeg's City Council passed the Transcona West Area Structure Plan in 2008. Since that time investments have been made into the surrounding areas sidewalks, bicycle paths, and new roads, namely Transcona Boulevard. The original City conceptual plans were shared with the public at an open house on May 16, 2013 at Canad Inns Transcona. In late 2014, the City departments vacated the old City of Winnipeg Public Works yard at 1500 Plessis Road. In order to clean up the site and generate productive use, housing etc. the City issued an expression of interest for a private sector partner.

On December 22, 2014, Transcona Boulevard was opened extending from Kildare Avenue (at Plessis Road) through the old City of Winnipeg Public Works yard and connecting with Peguis St.Council approved Edge Corp as a partner on April 29, 2015 and a Joint Venture was formed by Council mandate, in February 2016.

What impact will construction have on Plessis Road?

Improvements at the intersection of Plessis Road and Transcona Boulevard/Kildare Avenue West will result in road barricades during construction and slowdowns in traffic.

What will happen to the Transit stops on the north and south side of Kildare Avenue West directly east of Plessis Road?

The existing Transit stops will stay in the same locations and Transit service will be maintained during construction.

Will there be any changes to Kootenay Crescent?

What will be the impact on residents living on Kildare Avenue West directly east of Plessis Road?

What kind of pedestrian and cycling paths are you constructing?

A 3.5 metre combined pedestrian and cycling path is being constructed in the north boulevard of Transcona Boulevard. This path connects Transcona Trail west of the CEMR rail crossing with the path system in the Rotary Heritage Park east of Plessis Road.

Why does construction work on Transcona Boulevard end just east of the CN rail line?

Why are you upgrading the intersection?

The intersection of Transcona Boulevard/Kildare Avenue West at Plessis Road is being upgraded to improve traffic operations and traffic safety.

Why are there no additional sidewalks being added at this time?

A sidewalk was constructed on the south side of Transcona Boulevard as part of the project which extended two-lanes of roadway through the City Yard. As part of the current project a pedestrian/ cycling path is being constructed in the north boulevard. 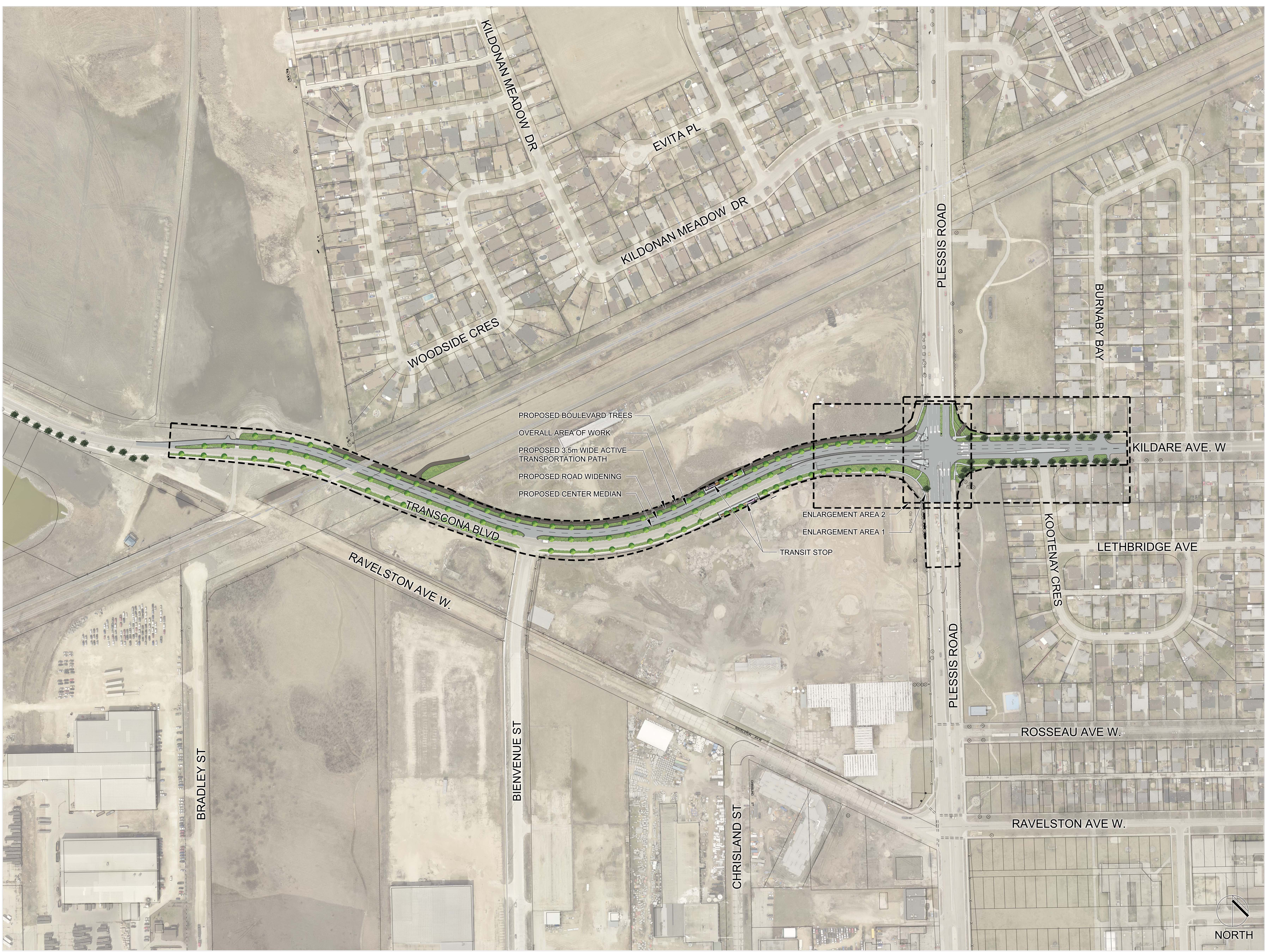