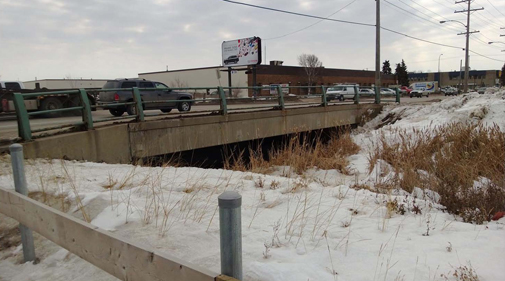 In May and June, the approach roadways in the vicinity of the bridge will be renewed and a minimum of one lane of traffic in each direction will be maintained during that period.

Reconstruction of the St. James Street bridge over Omand’s Creek is schedule to begin in early January 2014 and will be fully complete by the end of June 2014.

In the first phase from January to mid April 2014, St. James Street from Dublin Avenue to Bangor Avenue will be shut down completely so that the bridge can be expeditiously reconstructed. The entire bridge superstructure will be replaced and the foundations will be reconstructed utilizing the existing piles. The bridge will feature sidewalks on both side of the road with a new sidewalk added from Dublin Avenue to Bangor Street.

Local access to the businesses in the area will be maintained in the first phase. Transit will be rerouted using Orange Street and Bangor Avenue. View the Road Closures and Transit rerouting maps here.

In the second phase from May to June 2014, the approach roadways in the vicinity of the bridge will be renewed and one lane of traffic in each direction will be maintained during that period.

Click here to view a PDF of the display boards outlining the project plans. 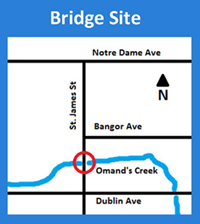