Our sewer systems collect wastewater from industry, commercial businesses and homes. From there, it is sent to one of our three wastewater treatment plants:

How does wastewater treatment work?

We treat wastewater to remove the major contaminants (carbon, nitrogen and phosphorus) and harmful bacteria, such as E. coli. To do this, we send the raw sewage through several processes in our plants. Bacteria called activated sludge plays a major role in the treatment process. The activated sludge bacteria use the contaminants in the sewage as food to reproduce. Once this treatment cycle is completed, the activated sludge is removed, the treated water is disinfected, and it is sent to the river.

Screens are used to remove plastics, rags, and other debris from the incoming raw wastewater. After screening, sand and grit settles to the bottom. The sand and grit are removed and trucked away to the Brady Road Resource Management Facility for disposal.

Next the wastewater moves into sedimentation tanks, where approximately 65% of the suspended material settles to the bottom of the tank. In addition to material that settles in the bottom of the tanks, grease and oil that floats to the surface is removed by paddles or skimmers. Primary treatment takes several hours before the wastewater moves to the next stage of treatment.

After Primary Treatment, the wastewater flows into bioreactors which contain a mixture of micro-organisms that feed on the carbon in the wastewater. Oxygen is fed into the bioreactor so the micro-organisms can metabolize the carbon they're feeding on. This process also takes several hours. The activated sludge, or biomass, must be separated from the treated wastewater. The separation takes place in another group of sedimentation tanks called Secondary Clarifiers.

In the final clarifier tanks, the biomass from the bioreactors settles out by gravity. About 25 to 50% of the settled biomass is returned to the head of each bioreactor to begin the process again.

The biomass that is reused provides a constant source of micro-organisms to the incoming wastewater for treatment. Because the biological growth within the bioreactors produces more biomass than is needed, some of it must be removed.

During digestion, the anaerobic bacteria break down the solids over the course of about 15 days. About half of the solids are destroyed during this process.

In the Digesters, a different type of bacteria, called anaerobes, feed on the carbon in the solids to produce biogases—mainly carbon dioxide and methane. Methane is recovered at the North End Sewage Treatment Plant (NEWPCC) and used to heat the Digesters and other buildings.

Once digestion is complete, excess water must be removed from the digested sludge. Dewatering is accomplished using high speed mechanical centrifuges. The liquid produced during dewatering is returned to another activated sludge process designed specifically to remove ammonia and nitrogen produced during digestion.

Digested material contains about 2% solids but is thickened to about 25% before being transported. The thickening process significantly reduces the volume of material that must be transported for final disposal.The thickened solids, now called biosolids, are trucked to the Brady Road Resource Management Facility. On average, Brady Road receives 36,000 kg of biosolids each day for final disposal. 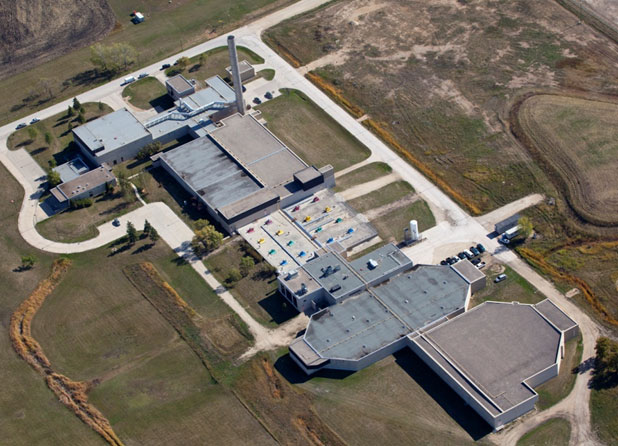 Located at 100 Ed Spencer Drive, just south of the Perimeter Highway, the South End Sewage Treatment Plant (SEWPCC) processes approximately 20% of the wastewater generated in the City of Winnipeg.

What does the City do to control odour at South End Water Treatment Plant (SEWPCC)?

The heat, ventilation and air conditioning (HVAC) system takes air from a variety of different process areas at the South End Water Treatment Plant (SEWPCC), and ventilates it to an odour control stack at the facility.

The odour control stack is 45 meters high and disperses the exhaust air into the atmosphere, diluting any odorous gases.

To further reduce potential odour concerns, a thermal oxidizer unit was installed in 2005/2006. The unit treats odours coming from the sludge storage tank and truck-hauling bays. The system operates during warm weather season, from early May to late October.

Are there any changes or additional odour control measures being done as part of the current South End Water Treatment Plant (SEWPCC) Upgrade Project?

In addition to the odour control stack and the thermal oxidizer unit, a new bio-filter system will be added to the facility, as part of the South End Water Treatment Plant (SEWPCC) Upgrade and Expansion Capital project. Concentrated foul air sources from the new sludge thickening system and new sludge fermenters will be sent to the new biofilter for treatment. Biofiltration is a biological process that converts odour-causing compounds into non-odorous gases and salts. The biofilter system will be housed in a concrete enclosure.

What factors affect odour in our neighbourhoods?

There are a number of factors that may impact what we smell in our neighbourhood. Some of these include seasonal variations like precipitation, wind, and humidity. These all impact what we smell at a given time. Odours may also be the result of the treatment plant, local farmers' fields with freshly spread fertilizer or other industrial operations in our neighbourhoods. The odours that come from these places can be easily confused, making it difficult to pinpoint its origin.

The City's sewage treatment plant upgrades include industry standard odour control technology for the new process areas, which will help us minimize the plant's potential impact on the communities nearby.

Who do I notify about odour coming from the plant?

If you notice odour coming from the South End Water Treatment Plant (SEWPCC), please report it by calling 311 or emailing 311@winnipeg.ca. 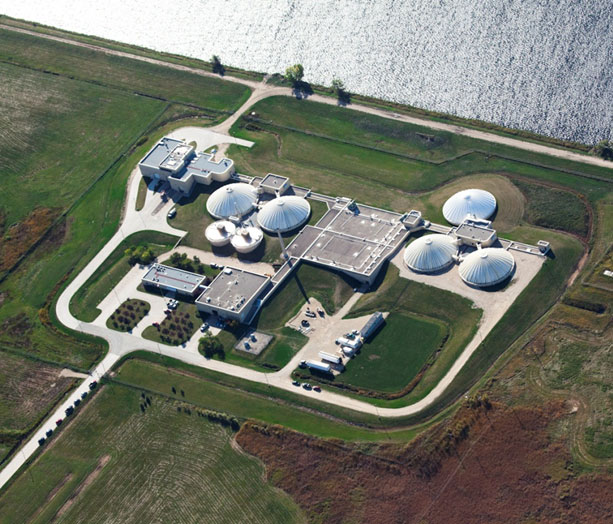 The West End Sewage Treatment Plant (WEWPCC) is located at 7740 Wilkes Avenue just west of the Perimeter Highway. The WEWPCC treats about 10% of the wastewater generated in the City of Winnipeg.