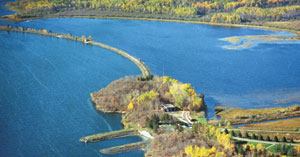 Winnipeg's drinking water comes from Shoal Lake, which is part of the Lake of the Woods. It is a large isolated lake in the southeast corner of Manitoba, at the Manitoba-Ontario border.

Construction of the Winnipeg Aqueduct began in 1915 and was completed in 1919. The aqueduct is a noted engineering marvel, patterned after ancient stone/masonry architecture with a dish-shaped concrete floor and a parabolic-shaped shell to cover and protect the water from freezing in winter. Gravity carries the water down the aqueduct to Winnipeg as Shoal Lake is higher in elevation than the city.

Does the City of Winnipeg have permission to withdraw water from Shoal Lake?

Yes. We withdraw water from Shoal Lake based on the authority granted by Provincial Acts from both Manitoba and Ontario, as well as a federal government bill from the Senate of Canada. This authority was reviewed and approved by the International Joint Commission in 1914.

Does the City of Winnipeg pay anyone for the raw water?

No. Legislation permits us to withdraw the water, stating that the water "is not property to be paid for."

Does the City of Winnipeg sell water?

No. We charge to recover the cost of transmission, storage, treatment and distribution of water to customers.

Does the City have an agreement with any First Nations?

Does the City control the water levels of Shoal Lake?

No. Our water supply does not require controlled lake levels and Winnipeg does not and cannot flood the lake. We do not have a control structure on the outlet of Shoal Lake at Ash Rapids. The Lake of the Woods Control Board regulates lake levels of the Lake of the Woods by operating dams, which can have an impact on Shoal Lake. Based on our recorded data, we've seen no trends in water levels other than seasonal changes. 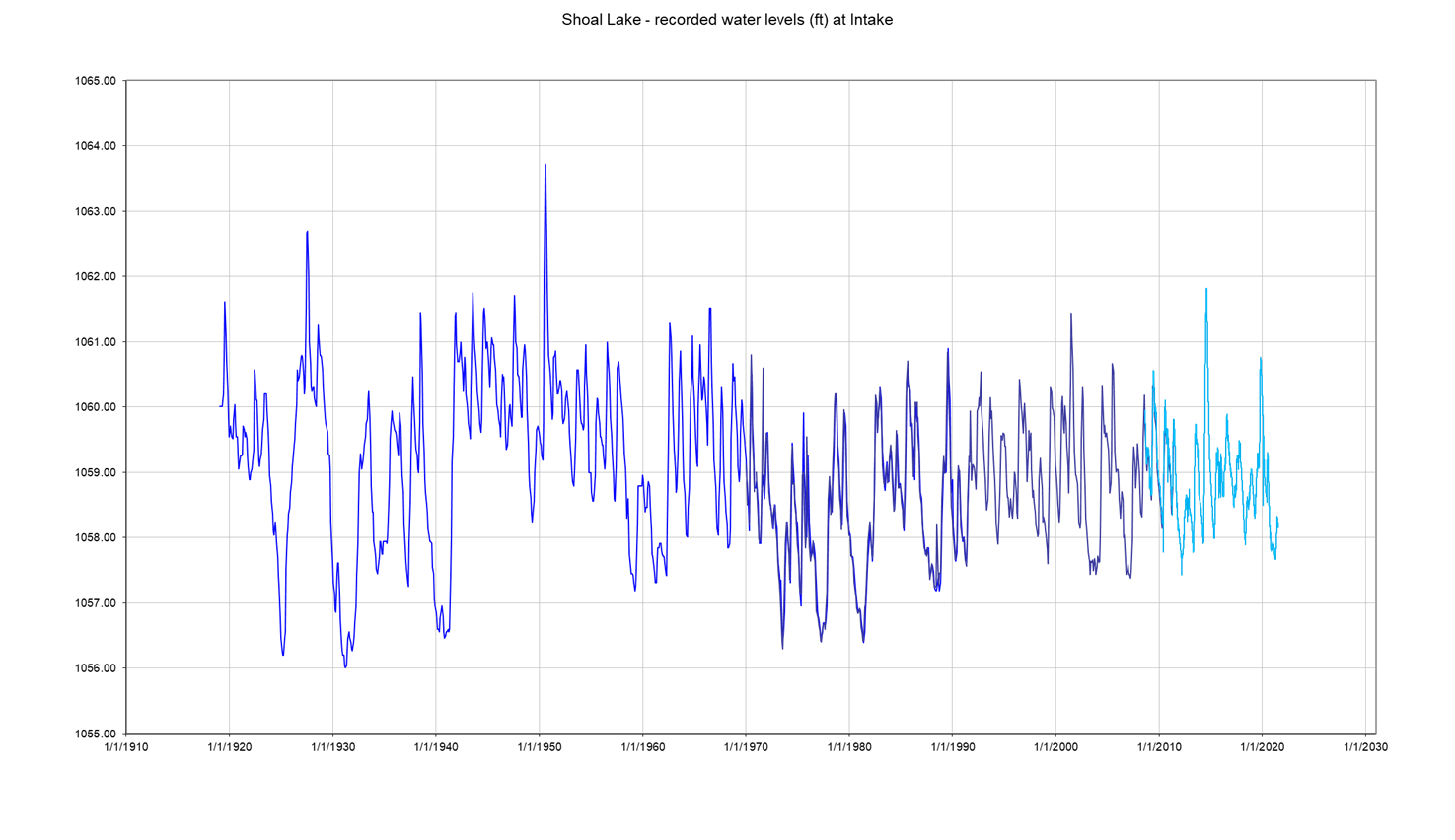 Does Winnipeg monitor the water quality in Shoal Lake?

Yes. We extensively monitor water quality in Shoal Lake and regularly take samples at multiple locations around the lake. Shoal Lake regularly meets 46 of 49 physical water quality guidelines prior to treatment. The remaining three parameters - colour, temperature and hardness - often do meet the guidelines prior to treatment, depending on the season. Despite meeting the guidelines, however, treatment of any raw water source is necessary before consumption.

We test at various locations throughout the lake (see the map below). Regular testing for microbiological parameters shows little variation between different areas of the lake. 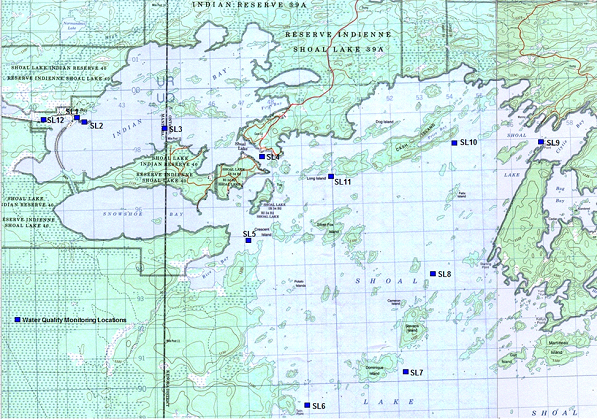 No. We share the same water source as Shoal Lake #40 First Nation and Iskatewizaagegan #39 Independent First Nation. In 1914-15, we built a diversion to direct water from Falcon River away from our intake to a different part of the same lake. Water from Falcon River is murkier because it flows through peat lands. The plan was to consume the water without treatment, so the clearer lake water was preferred. The darker river water is diluted in the lake and does not affect the colour of the lake water. This water would flow to the First Nations communities with or without the diversion.

Is there still a boil water advisory at Shoal Lake?

No. As of September 2021, a new water treatment facility ensures that Shoal Lake First Nation #40 residents have safe drinking water.

The City no longer provides public rail service for operational and economic reasons. In the past, the Greater Winnipeg Water District (GWWD) railway provided passenger and freight services to the rail station at the Shoal Lake aqueduct intake. In addition, there was a store and Canada Post office that served the region. Over the years, public use of the railway declined as roads started to be built in the Shoal Lake area, beginning with Ontario Highway 17 (TransCanada) in the 1930s and Ontario Highway 673 (Shoal Lake Road) in the 1950s. The post office closed in 1970, and the store closed in the 1980s.

Has Winnipeg's water use artificially isolated the Community? 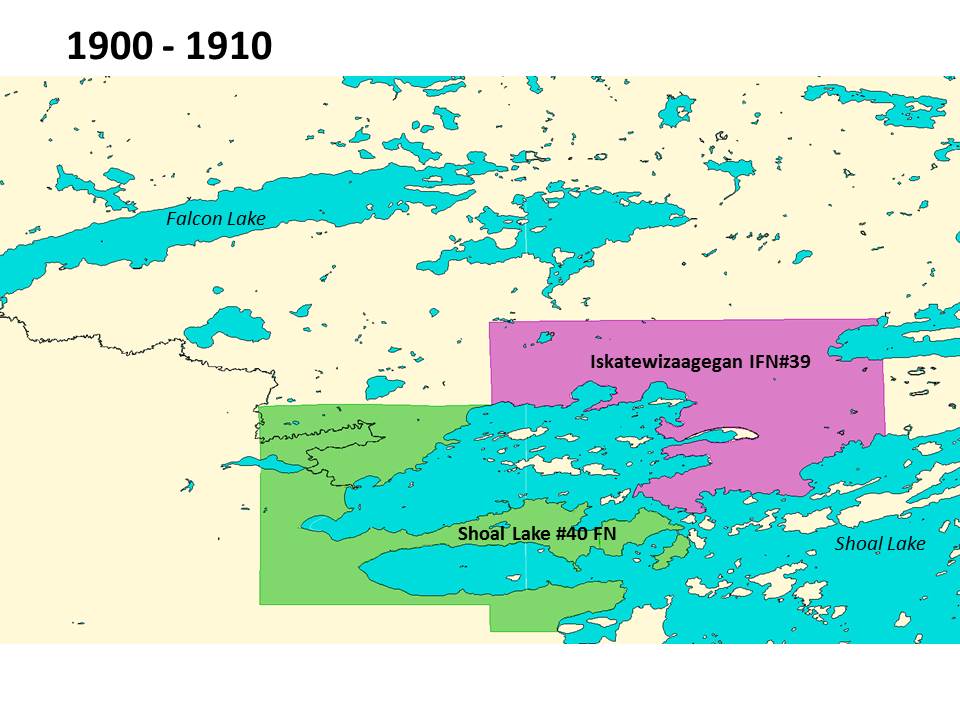 Scroll through the timeline of access developments at Shoal Lake from 1900 to 1990 by clicking the left and right arrows (above).

Access to Kenora and points east was historically by boat via Ash Rapids. Construction of the railway station at the Aqueduct Intake brought the first year-round transportation by vehicle to the Shoal Lake area. The railway station provided passenger and freight service to the Lake and became a Canada Post office for the region. Road construction in the area started in the 1930s, several decades after the railway was built. Demand for rail transport declined as automobiles came into widespread use and roads were expanded. Eventually the rail service was discontinued. For a period in the 1980s/1990s, the City opposed western road access to the Shoal Lake #40 First Nation community because of concerns about impact on water quality. At that time, the City did not have a multi-barrier water treatment plant.

What is Winnipeg doing to supply access to Shoal Lake First Nation #40?

The City of Winnipeg contributed to the design and construction of Freedom Road, which consists of an all-weather road and two bridges.

What are zebra mussels and have they ever been found in Shoal Lake?

Zebra mussels are an invasive, fingernail-sized mollusk with dark, zig-zagged stripes on their shell. Zebra mussels negatively impact ecosystems as they filter out algae that native species need for food. They also attach to and incapacitate other native mussels.

While a mature zebra mussel has never been found in Shoal Lake, the Ontario government did find a zebra mussel larva (called a veliger) in a water sample taken in August 2018. The finding of a single, larval individual does not necessarily indicate that the Shoal Lake has a zebra mussel problem.

Zebra mussels may impact the ecosystem of Shoal Lake, as they compete with fish for food. The mussels can also settle inside water intake pipes and impede water flow. To prevent this, a protection system at the water intake at Shoal Lake would be required.

What does the City of Winnipeg currently do to monitor and protect Shoal Lake from zebra mussels?

The City of Winnipeg has an extensive water quality monitoring program in Shoal Lake for both adult zebra mussels and veligers. The program runs during open water season, from May through October, and includes monthly water testing and special zebra mussel traps.

From June through September, intermittent chlorine is used in the aqueduct to control biofilm. This process also happens to be an effective way to prevent zebra mussels from settling inside the aqueduct.

What would the City of Winnipeg do if there was zebra mussels were found in Shoal Lake?

The City began preparing for the possibility of zebra mussels in Shoal Lake in the 1990's. A system to chlorinate the intake and the aqueduct was installed in 1995. Since zebra mussels were not present, the only part of this system that has been used is the part that chlorinates the aqueduct to control biofilm.

In 2016, we had a consultant review the existing system and evaluate the available options for zebra mussel control. This study recommended to continue with chlorination, but also recommended system upgrades to modernize the system and improve efficiency. Chlorination is a well-established technology that has become one of the most effective methods to control mussels in water intake facilities and reservoirs. Construction of this upgrade is planned to start in 2022.

If zebra mussels appear before the completion of the upgrade, we would use existing chlorine infrastructure and modify our current monitoring program.

What can residents do to protect water ways from zebra mussels?

We encourage residents to clean, drain and dry all watercraft and equipment when moving between waterbodies to help stop the spread of invasive species. For more information on preventing the spread of zebra mussels, visit Manitoba.ca/StopAIS or call (toll-free) 1-87-STOP AIS-0 (1-877-867-2470).