Since Shoal Lake is higher than Winnipeg, water flows downhill through the aqueduct. The aqueduct is a large concrete pipe that was built to carry the water. Construction started in 1915 and was completed in 1919. It cost 17 million dollars at the time and can carry 386 million litres, or 85 million gallons, of water per day.

Before it is treated, water from Shoal Lake is stored in Deacon Reservoir. The reservoir is on the east side of the Winnipeg floodway, a few kilometres south of highway 15. The reservoir was named after Thomas R. Deacon, the mayor of Winnipeg in 1913 who promoted the Shoal Lake project.

Water is stored at Deacon Reservoir to handle peak summer demands for water and to allow brief shutdowns of the aqueduct for maintenance. The four large outdoor reservoirs hold up to 8.8 billion litres (1.9 billion gallons) of water - enough to supply Winnipeg for about 30 days. Powerful pumps move the water from the reservoirs into the plant for treatment.

The new water treatment plant has been built at the Deacon Reservoir site. We examined several possible sites for the plant:

The Deacon site is best because: 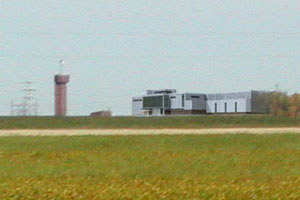 Due to security and safety concerns, tours of this facility are not available.

A virtual tour of our drinking water treatment plant is available.