This study is now complete

Update December 2020 – The latest phase of design is now complete.

A public engagement summary and report are now available under the Engage tab.

The City of Winnipeg (the City) is committed to building pedestrian and cycling infrastructure for people of all ages and abilities. Through this study, a preliminary design for a new pedestrian and cycling bridge over the Assiniboine River will be developed to connect Osborne Village to Downtown via McFadyen Park on the north side of the river and Fort Rouge Park on the south side of the river. Considerations for this project include pedestrian and cycling connectivity throughout Osborne Village to Osborne Rapid Transit Station, Norwood Bridge, bike lanes on Nassau Street, and the riverwalk, upgrades to both McFadyen Park and Fort Rouge Park, crime prevention through environmental design (CPTED), and riverbank stabilization.

December 2020 - Following the public engagement and design process, the preliminary design of the bridge and parks, and functional design of pedestrian and cycling connections are now complete.  Through this study, a preliminary design for a new pedestrian and cycling bridge over the Assiniboine River has been developed to connect Osborne Village to Downtown via McFadyen Park on the north side of the river and Fort Rouge Park on the south side of the river. Considerations for this project include the functional design of pedestrian and cycling connectivity throughout Osborne Village and the riverwalk. A preliminary design for upgrades to both McFadyen Park and Fort Rouge Park includes crime prevention through environmental design (CPTED), and riverbank stabilization on the south bank of the Assiniboine River.

Please visit the Recommended Option tabs to read more about the proposed designs.

Design items that are not explored at this level of design (but that will be explored in the future) are:

Update October 2018 - As the project team continues to refine project designs, Lewis Street and part of an adjacent back lane have been newly identified as a potential cycling connection. View the notice under the documents tab. At this time, we are reaching out to residents and businesses along this newly identified connection to ensure they are aware of the study and have an opportunity to contact the City of Winnipeg with any further questions. Before cycling connections are recommended, the project team wants to ensure local input is considered.

This route was not identified in previous phases of the project because connections to Fort Rouge Park were developed after considering public input on other major routes along River Avenue and Stradbrook Avenue.

The cable-stayed curvilinear bridge was selected based on it being the bridge option that had the highest public support and best overall technical design.

The cable-stayed bridge was selected over the other two bridge options because of benefits in key technical areas:

The centre of each of the two bridge curves gradually expands to a 7.0 m wide overlook point.

This bridge has two angled towers (near each end/abutment) that the cables connect to.

This option is more expensive than Option 1: Girder Bridge and is comparable in price to Option 3: Suspension Bridge.

The cable stays on each curved side will project shadows on the water resembling rays on sunny days.

The bridge cables allow for the inclusion of artistic lighting above the bridge.

Based on what we heard from public feedback received in early 2018, the following attributes applied to all bridge concepts presented:

Changes from the designs shared in May 2018 include:

What is being removed:

What is being removed:

Starting with the proposed cycling routes developed by the City of Winnipeg’s Pedestrian and Cycling Strategies, analysis of public feedback from two rounds of public engagement and technical analysis has helped refine connections to a functional design level. The cycling connections of this project were designed to a functional design level, which will requires another phase of design (preliminary design) and public feedback on barriers, lane and sidewalk widths, and to confirm the locations and sizes of on-street parking, loading zones and transit stops.

This low-stress route would complement the bicycle lanes on River Avenue and Stradbrook Avenue and provide direct access to businesses on Osborne Street.

Provides a connection to the proposed one-way bicycle lanes on River Avenue and Stradbrook Avenue and Fort Rouge Park (and the proposed pedestrian and cycling bridge connecting to Downtown).

Thank you to all Winnipeggers who participated in the Osborne to Downtown Walk Bike Bridge and Connections project in 2018. Thank you for your collaboration and/or consideration of other participants while seeking solutions for the greatest number of residents. Your reflections and visions helped the project team arrive at better project decisions that will seek to benefit the Downtown and Osborne Village neighbourhoods.

The public engagement summary and report are now available and provides an overview of the feedback collected for the project.

The City's Transportation Master Plan (TMP) presents a long-term strategy to guide the planning, development, renewal, and maintenance of Winnipeg’s transportation system. In 2015, City Council approved the Winnipeg Pedestrian and Cycling Strategies (PCS), which provide a long-range policy framework for active modes of transportation for the next 20 years.

The City's Pedestrian and Cycling Strategies note that the Red River, Assiniboine River, and the rail corridors create significant barriers within the walking and cycling networks, creating challenges to those navigating Winnipeg on foot or bicycle.

The Pedestrian and Cycling Strategies identifies the need for a new pedestrian and cycling crossing between McFadyen and Fort Rouge Parks along with priorities for new cycling routes in Osborne Village. The existing Osborne Street and Donald Street bridges do not provide all ages and abilities cycling connections across the Assiniboine River.

This crossing has the potential to be a landmark structure for Winnipeg. Key drivers include economy, functionality, constructability, architecture, and artistry. The City envisions an elegant and aesthetically pleasing, but cost effective structure. Creating connections between the wider transportation network includes a connection to Assiniboine Avenue on the north side of the river and to the Osborne Street Bus Rapid Transit Station, Nassau Street, and the Norwood Bridge on the south side.

The public engagement and design process will seek feedback on current use, values, and opportunities for improvements while also assessing potential for sharing park amenities through the new bridge connection.

Construction of this project is subject to council approval and funding. 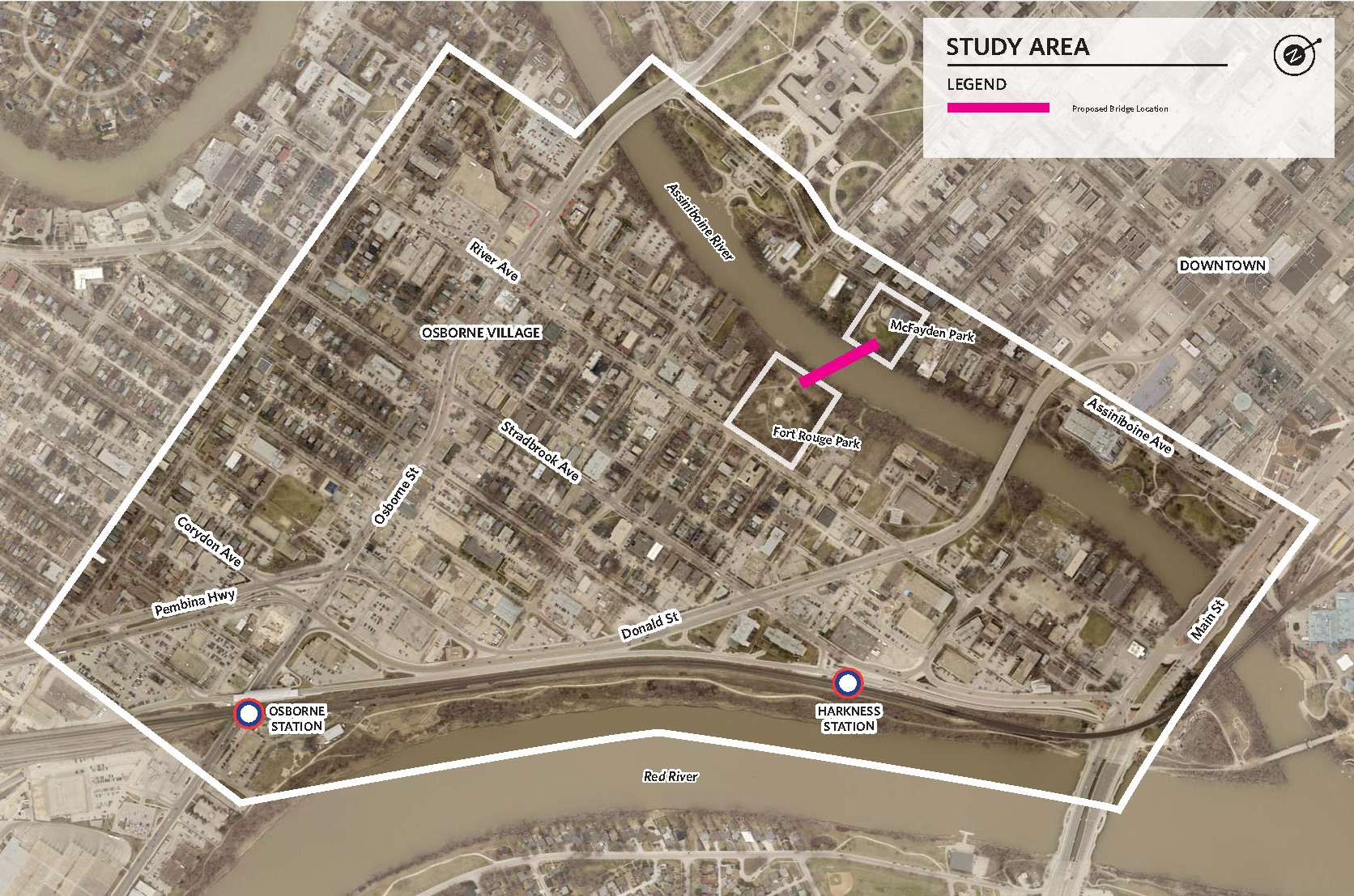 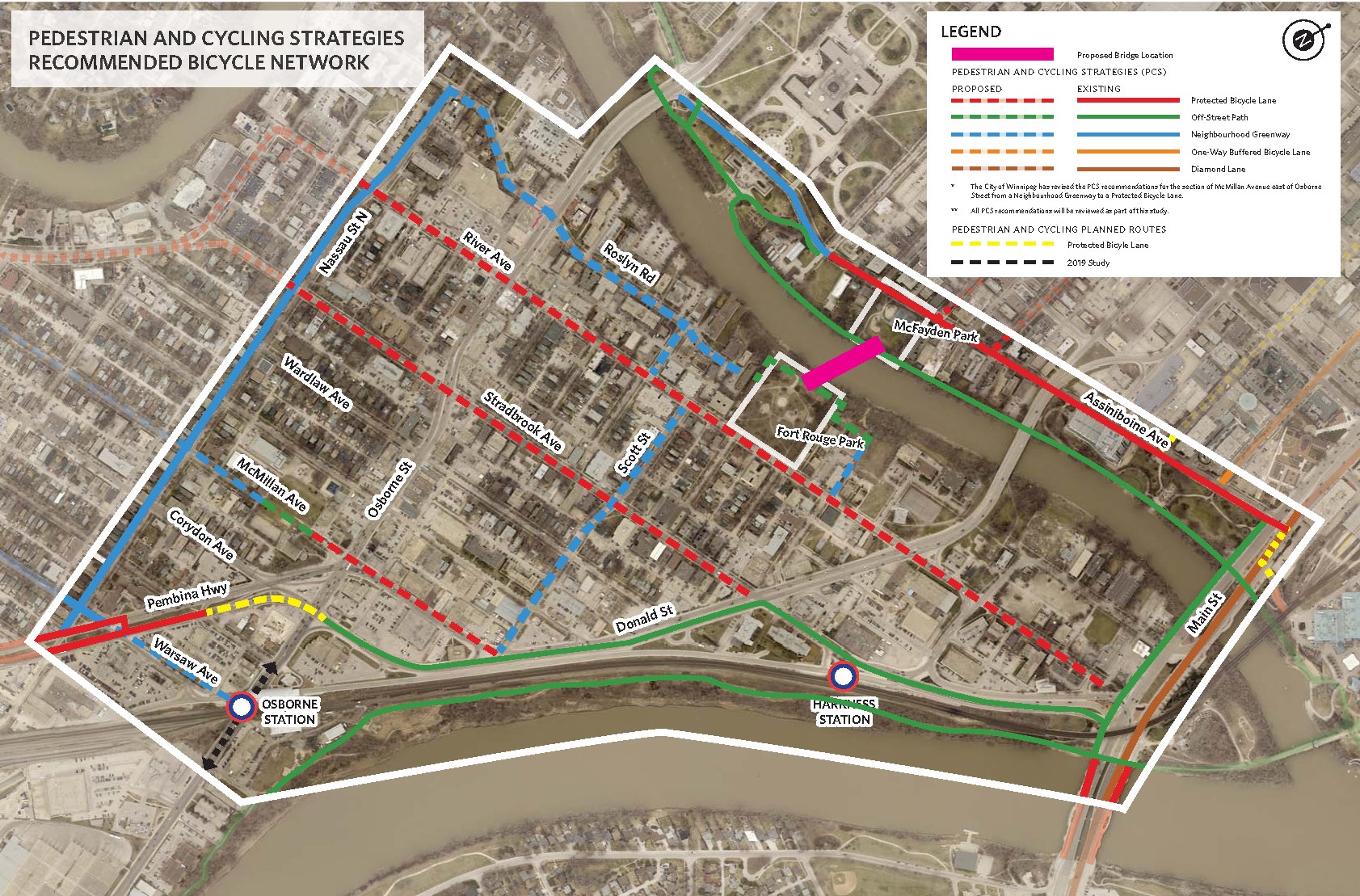 Go to the Waterfront