Like many cities in North America, Winnipeg has a combined sewer system. Combined sewers are designed to collect both land drainage (rainwater and snowmelt) and wastewater (sewage from homes and businesses) in the same pipe, and transport both to the sewage treatment plant before being released into the river. In large wet weather events, however, the sewers get overloaded with excess rainwater, causing the contents of the combined sewers to overflow into the rivers.

In 2009, the City began investing ($12 million to date), in CSO outfall event monitoring and volume calculation tools to improve CSO estimations. This decision was the result of a recommendation from the Clean Environment Commission. Prior to the installation of these instruments, estimates were based solely on analytical data, utilizing several assumptions.

As a result of these instrumentation investments:

The City has committed over $4 million from 2013 to 2021 for outfall and gate chamber rehabilitation projects. Additional instrumentation has been added to three outfalls since 2020, increasing the total monitored CSO outfalls to 45.

This bar chart shows the amount of rainfall and the number of events per year that are greater than or equal to five millimeters (mm).

Annual and Average 9-Year Rainfall for the Combined Sewer Area 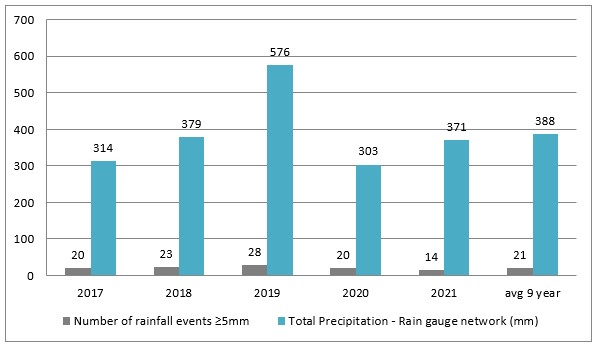 This bar chart shows the number of CSOs per year along with the volume of overflow per year. 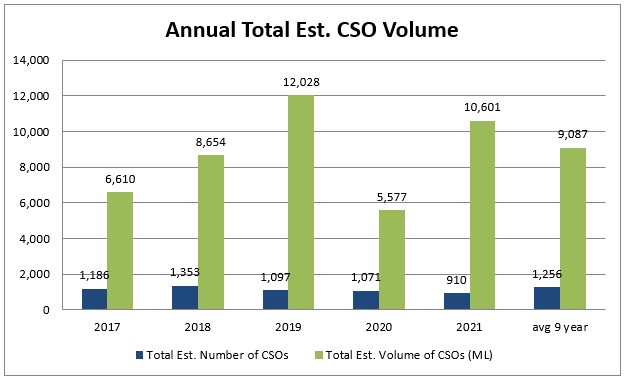 CSO volumes vary from year to year depending on a large number of factors. The most critical are: the amount of rain that falls in the city, the intensity, frequency and duration of the rainfall, and where it falls in the city. These factors and river level can greatly influence the volume of sewage within an overflow.

The amount of wastewater that is treated at our sewage treatment plants will vary based on the intensity and frequency of wet weather events. Using an example from a historic intense rain event, four percent of the CSO was wastewater and 96 percent was rainfall runoff. The bar chart below illustrates the total treated wastewater and CSO volume breakdown using the four percent value for the wastewater component. 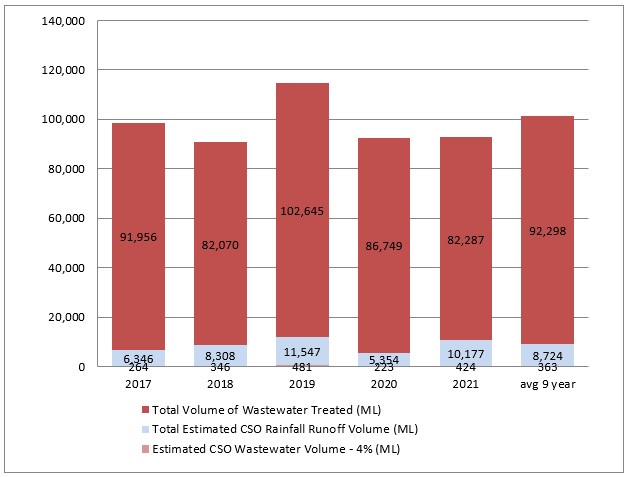 The City Winnipeg has been working to reduce the amount and impact of CSOs in Winnipeg for many years. This work is very expensive and lengthy. You can learn more about CSOs by visiting Winnipeg.ca/cso.

Data values on this page are representative of the 2013 Baseline Sewer Network.

National Pollutant Release Inventory (NPRI) report estimation of percent sewerage volume lost from CSOs was based on purely analytical assumptions as no permanent CSO outfall instrumentation was in place.

A recommendation from the Clean Environment Commission (CEC) was to instrument the CSO outfalls.

Planning began on the CSO Outfall Monitoring Program for installing instrumentation at CSO outfall sites. From 2009 to 2015, 39 outfall locations have been instrumented for CSO monitoring. The cost of the CSO monitoring equipment and hydraulic models necessary to measure and estimate CSO volumes is approximately $12 million.

Province Environment Act Licence No. 3042 required annual reporting of CSO to commence in 2014.

Estimates of wastewater flows from CSOs have been validated based on instruments installed at 39 CSO Outfall locations.

On November 24, 2017 the Manitoba Government directed the City to complete the next phase of the CSO Master Plan by August 2019 with a recommended control of 85% capture in a representative year.

The CSO Master Plan was submitted to the Province on August 28, 2019, consisting of conceptual plans to meet the approved control of 85 percent capture in a representative year for 43 combined sewer districts by December 31, 2045.

Estimates of wastewater flows from CSOs at instrumented CSO Outfall locations increased from 39 to 42.

Estimates of wastewater flows from CSOs at instrumented CSO Outfall locations increased from 42 to 45.