From Main Street to Brookside Boulevard

This study is now complete

From 2014 to 2016, a Functional Design Study was conducted for the Chief Peguis Trail (CPT) Extension West. The intent of the study was to gain insight into the use and expectations for the CPT Extension West from Main Street to Brookside Boulevard. The CPT Extension West will be approximately 10 kilometers in length and will support economic development, create recreational opportunities, and support the completion of the Strategic Inner Ring Road to reduce traffic on neighborhood streets to make them more accommodating for public transit, walking and cycling.

A Preliminary Design Study is now being completed for the CPT Extension West.

The Preliminary Design Study will recommend a final design for the CPT Extension West from Main Street to Brookside Boulevard. The design will:

June, 2019 - An administrative report was presented to council at the June 20, 2019 meeting, with a recommendation that the Chief Peguis Trail Extension West project be considered and prioritized amongst other major unfunded capital projects through development of a City Infrastructure Plan. This recommendation was accepted by council. The minutes of the meeting are available here. The project timing projection will be updated as part of the upcoming Transportation Master Plan review, and presented as part of the final document of that study.

May 2019 - An administrative report outlining recommendations for the Chief Peguis Trail Extension West has been developed. The report will be presented at a meeting of the Standing Policy Committee on Infrastructure Renewal and Public Works (SPC-IRPW) on May 28, 2019. An executive summary of the project report, updated design drawings, and report on property requirements are now available under the documents tab.

As part of the decision-making and report review process, there is an opportunity for members of the public to appear as delegations at the SPC-IRPW meeting. The meeting agenda is now available online.

October 2018 - A draft preliminary design was presented to the public for feedback as part of the study of CPTEW from Main Street to Brookside Boulevard at an open house on November 7, 2017. Since then, the preliminary design is being further refined and is expected to be completed later this year, after which an Administrative Report with recommendations will be presented for Council's consideration.

Engagement during this phase of the project is now complete. A public engagement report is now available within the documents tab of this project page.

Thank you to the more than 400 people who came out to view a video simulation of the proposed route and ask questions at an information session at the Red River Community Centre on November 7, 2017. At the event we received over 160 exit surveys. The final round of public engagement in November 2017 also included another series of land owner and stakeholder meetings.

The intent of the public engagement process for the Preliminary Design Study was to provide information and collect local feedback to:

From 2014 to 2016, four public engagement events were held to collect feedback for the Chief Peguis Trail Extension West Functional Design Study. A public information session held on June 29, 2016 at Red River Community Centre had 244 people in attendance. An online survey closed on July 12, 2016 with 84 responses. Comments received through this public engagement process indicated a repeated desire for an uninterrupted flow of traffic and fewer traffic lights; this feedback was considered in the latest phase of the design. Read more about what was said during previous public engagement activities under the related links tab.

Following the 2016 engagement events, a series of landowner and stakeholder meetings were facilitated from February 2017 to June 2017, including a public information session which was held on June 6, 2017 at the Red River Community Centre, where 244 individuals signed-in and 113 comment forms were collected. An online survey received 112 responses. A summary of these engagement events and the feedback received from the public, stakeholder and landowners is available online here.

The City of Winnipeg Transportation Master Plan (TMP) identifies the CPT as a major transportation facility and an important component of the City’s strategic road network. The ultimate completion of the CPT Extension West will provide a continuous east-west link between Brookside Boulevard (Route 90) and Perimeter Highway (PTH 101). The CPT Extension West will support economic development, create recreational opportunities, and support the completion of the Strategic Inner Ring Road to reduce traffic on neighborhood streets to make them more accommodating for public transit, walking and cycling. 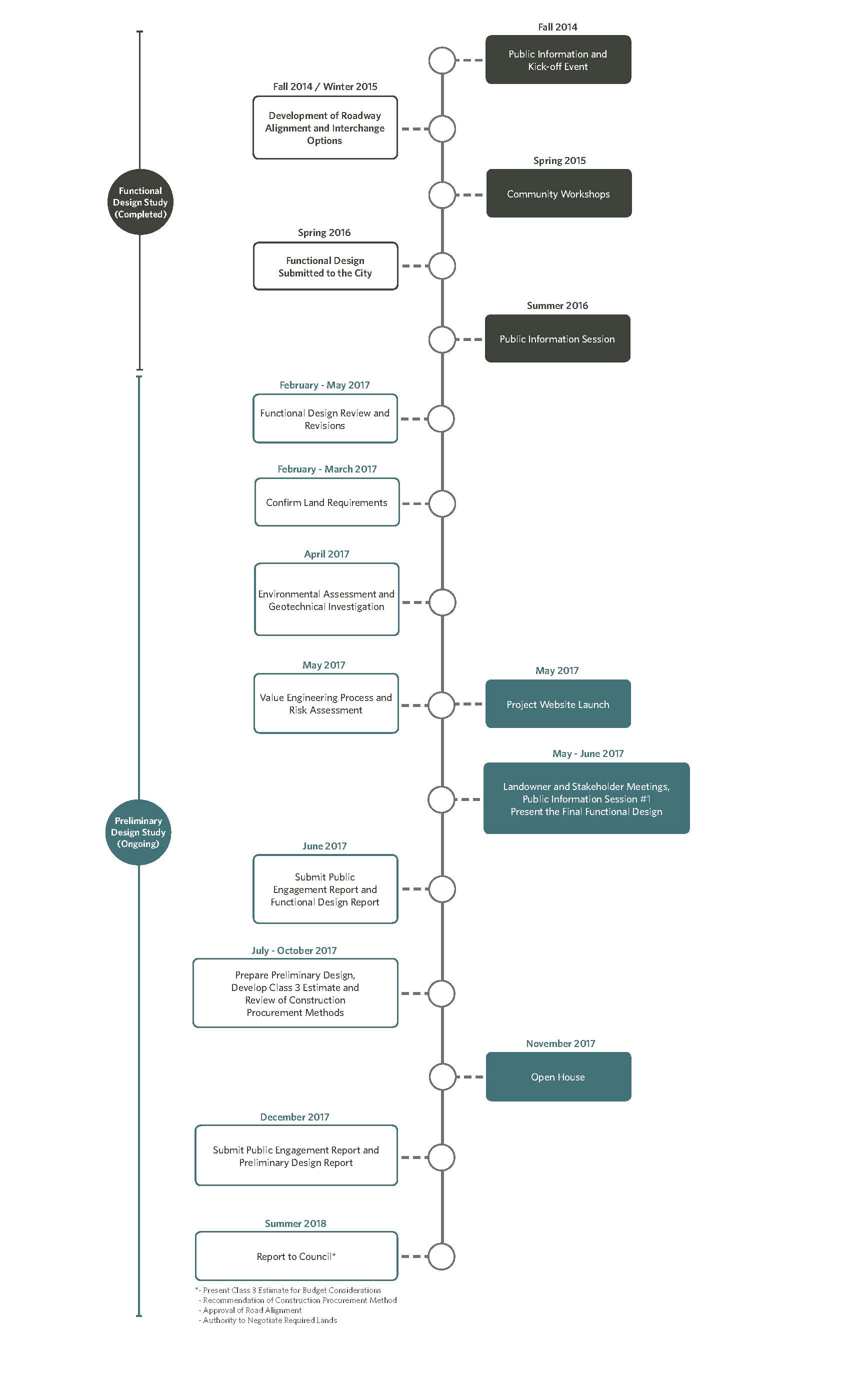 What is the purpose of the Preliminary Design Study?

This study will prepare a recommended final design for the CPT Extension West from Main Street to Brookside Boulevard. The design will:

Will properties be impacted?

The City of Winnipeg has reserved some land along the corridor for the CPT Extension West. Where the alignment will require additional lands, meetings will be held with landowners prior to the public information session.

What will the impact be on Little Mountain Park?

How is this study different from the Functional Design study?

The Preliminary Design Study will confirm land requirements, address the requirements of the Environmental License, include pedestrian and cycling infrastructure, identify potential locations for park and ride lots, identify potential locations for public art, and include greater detail of all of the design elements (i.e., lane width, intersections, etc.).

Has the design changed from the Functional Design Study?

A few changes have been made to the design that was presented in 2016. These changes were influenced by both technical requirements and public input and include:

When will construction start?

The project is subject to Council and funding approval. There is no anticipated construction date at this time.

Will pedestrian and cycling infrastructure be included in the plan?

How are you considering impacts on the natural environment?