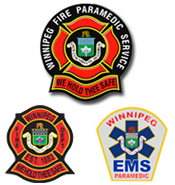 The 2010 National Fire Code (NFC) sets out technical provisions regulating: The NFC establishes requirements to address the following three objectives, which are fully described in Division A of the Code: The NFC is available for purchase from the National Research Council and the Fires Prevention and Emergency Response Act and fire related regulations can be downloaded From the Province of Manitoba website under Manitoba Laws. http://web2.gov.mb.ca/laws/regs/index.php?srch=fire+&act=0&am=0

The National Building Code (NBC) and National Fire Code (NFC) each contain provisions that deal with the safety of persons in buildings in the event of a fire and the protection of buildings and other types of facilities besides buildings from the effects of fire. These two National Model Codes are developed as complementary and coordinated documents to minimize the possibility of their containing conflicting provisions. It is expected that buildings comply with both the NBC and the NFC. The NBC generally applies at the time of construction and reconstruction while the NFC applies to the operation and maintenance of the fire-related features of buildings in use.

Open all Close all

Where do I purchase the 2010 National Fire Code?

Can I use the 2015 National Fire Code in Manitoba?

Not yet. The 2015 National Fire Code is a model code which has not yet been adopted for use in Manitoba. The Office of the Fire Commissioner, Province of Manitoba, is responsible for adoption of the NFC. Information on current Code adoption can be found in the "Codes and Standards" section of www.firecomm.gov.mb.ca/codes.html, or by phone at 204-945-3322 or 1-800-282-8069.