The Winnipeg Fire Paramedic Service is taking to the skies to help save lives. It's adding an unmanned aerial vehicle to the fleet.

"It's significant," Scott Wilkinson, Senior Academy Officer with the WFPS Training Academy, said. "It will give an aerial bird's eye reconnaissance of everything on the scene that otherwise our commanders can't see."

The UAV, also known as a drone, will allow for a safer, quicker and more efficient response to emergencies. It will be available to be deployed 24 hours a day, seven days a week, year-round to a range of calls.

"If we are looking for a lost individual or someone who is in the river in need of emergency assistance, it is very difficult to spot those people, especially at night," Wilkinson said. "The thermal imaging camera will be able to identify them extremely quick."

In addition to search and rescue operations, the drone will be able to critically assess how dangerous a situation is in real-time and see fire hot spots difficult to spot from the ground.

"Commanders will be able to use it as an oversight view of the structure looking for heat and other building deteriorating conditions that would be a threat to the personnel inside," Wilkinson said.

The drone has a top speed of 80 km/h and can operate in temperatures as cold as -20°C and a maximum wind speed of 40 km/h.

"This will allows us to operate in Winnipeg weather," Wilkinson said. "Once on scene it could be in the air in less than five minutes."

He said on top of safety, the drone program will also lead to operational efficiencies.

"If we can resolve the incidents quicker we will have our people on scene for a shorter period of time and that allow us to use less of our consumable items such as fuel," Wilkinson said. "If we can do a safer operation and avoid some manner of injuries to our personnel we keep them on duty and save costs in that way as well."

The idea for the drone came from the wildland fire program.

"They were looking at the need to monitor our wildland fires," Wilkinson said. "It grew from there when we discovered the amount of resources we could get out of the UAV."

The WFPS approached the City of Winnipeg Standing Policy Committee on Innovation and received program funding of around $44,037. 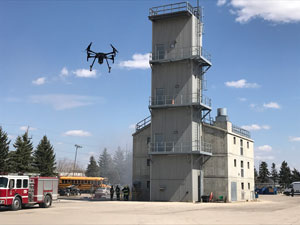