The art you'll find along the Southwest Transitway 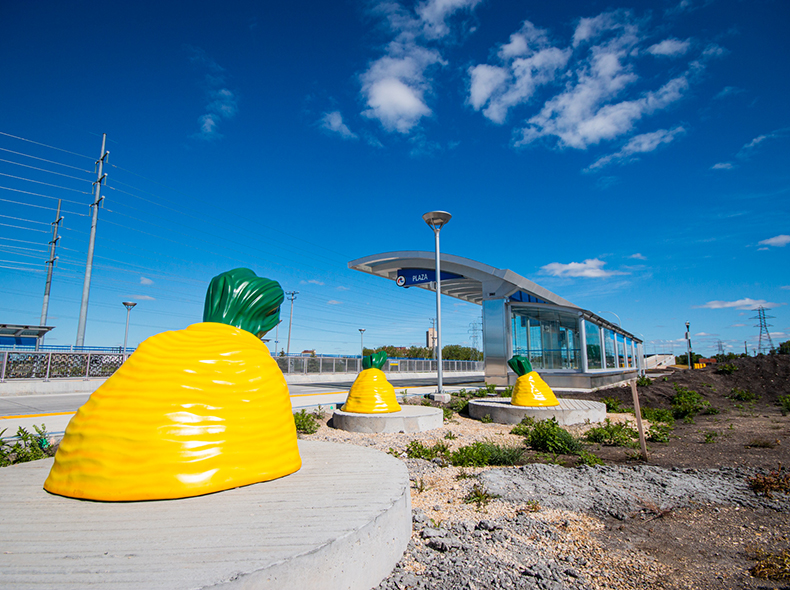 Along the Southwest Transitway, an oversized copper-coloured kettle catches the sunlight, evoking the warmth of a Metis community pushed to Winnipeg’s margins before being evicted; the tops of sugar beets pop out of the ground, hinting at the ‘unseen’ treatment of Japanese Canadians interned and forced to work in Manitoba farms that grew the vegetable; and a trio of spoked wheels link together in sculpture, recalling the method of transport that enabled the fur trade between Indigenous and settler communities: the Red River cart.

Rooted in its past, these recent editions to the landscape are the result of a project from the Winnipeg Arts Council that led to seven new public art projects being opened with the second stage of the 11-km Southwest Transitway. 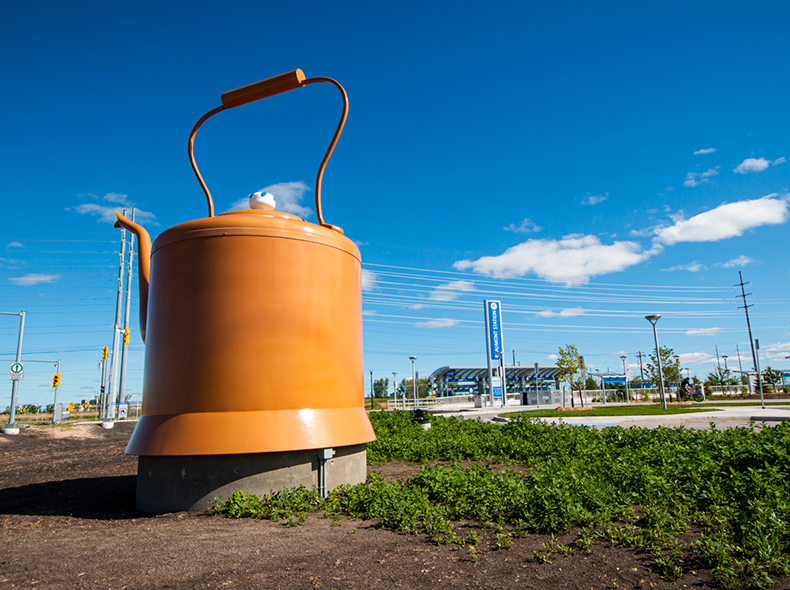 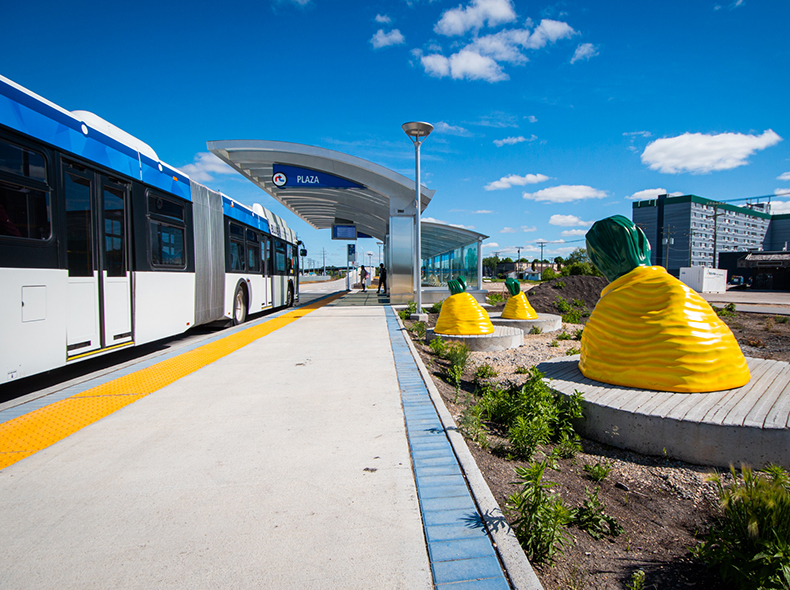 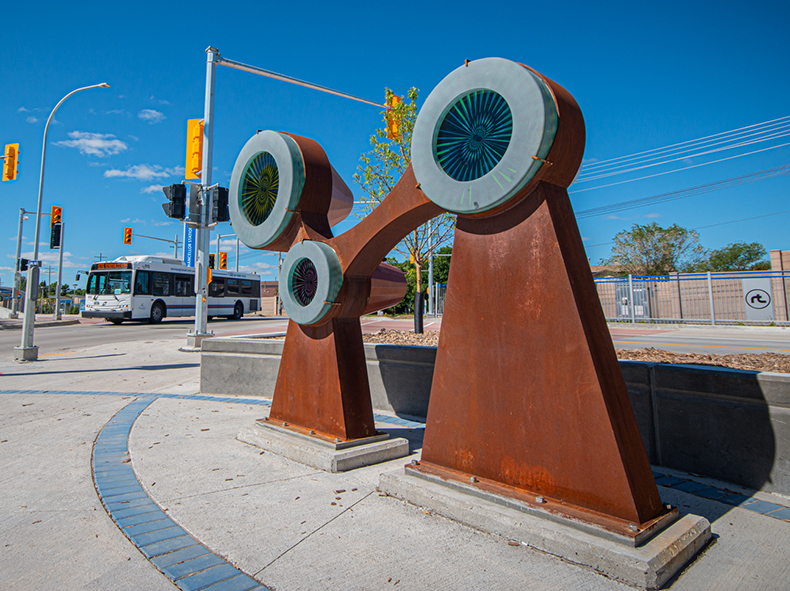 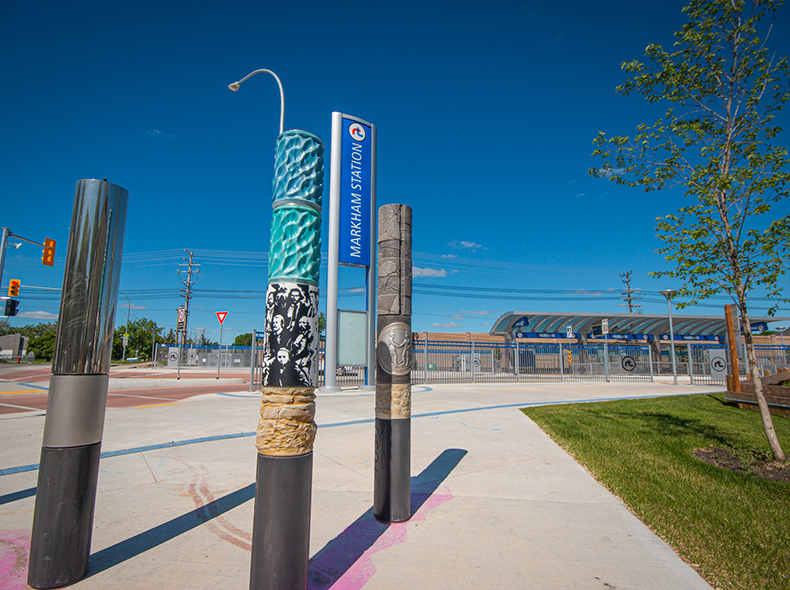 Alexis Kinloch, Project Manager for Public Art at the Winnipeg Arts Council, said the Southwest Transitway project began with extensive research in 2016 and a goal of commissioning works that tapped into the history of communities in Winnipeg, the province, and the areas alongside the transitway.

“We wanted artists to make work that really considers what has made these places these places,” she said.

A national call for artists was released in 2016 with digital versions of archival photos and documents put online for artists to explore, along with facts gleaned from the research.

“This is near where Rooster Town was located, for example,” said Kinloch, referring to the former Metis community and namesake of the kettle sculpture, designed by Ian August.

To ensure the artists selected would include representation from communities with historical ties to the areas, Kinloch said two of the calls were only open to Indigenous artists and one to artists with a Japanese background. A selection committee came up with a short list of artists from those who had expressed interest, inviting them to complete a detailed proposal before the final works were chosen.

Most of the installation work was completed in 2019, while construction of the Southwest Transitway was still underway. The transitway, along with its adjacent active transportation routes, took approximately three years to build and finished approximately $46 million under budget.

Kinloch said she’s seen positive response to the art online, adding that she has noticed the art sparking conversations among residents who weren’t aware of the history that served as inspiration.

The Winnipeg Arts Council has distributed a map and guide to the art work.

Public votes to celebrate sport in images at Stadium Station

Passengers travelling the University of Manitoba leg of the BLUE rapid transit line have another chance to feast their eyes, thanks to a separate project that gave residents the opportunity to weigh in on what type of images they’d like to see decorate Stadium Station, located at IG Field.

“We were excited by the opportunity to engage with the public,” said Jesse Crowder, Manager of Major Projects at Winnipeg Transit.

“We were happy with the feedback and response we received to allow their choice of theme to be used on these panels.”

During a vote last summer, sports fans cheered the loudest among more than 500 respondents, who also had landmarks, nature, and events to choose from as a potential theme for images to adorn architectural features of Stadium Station designed to accommodate the high volume of buses required for various events. 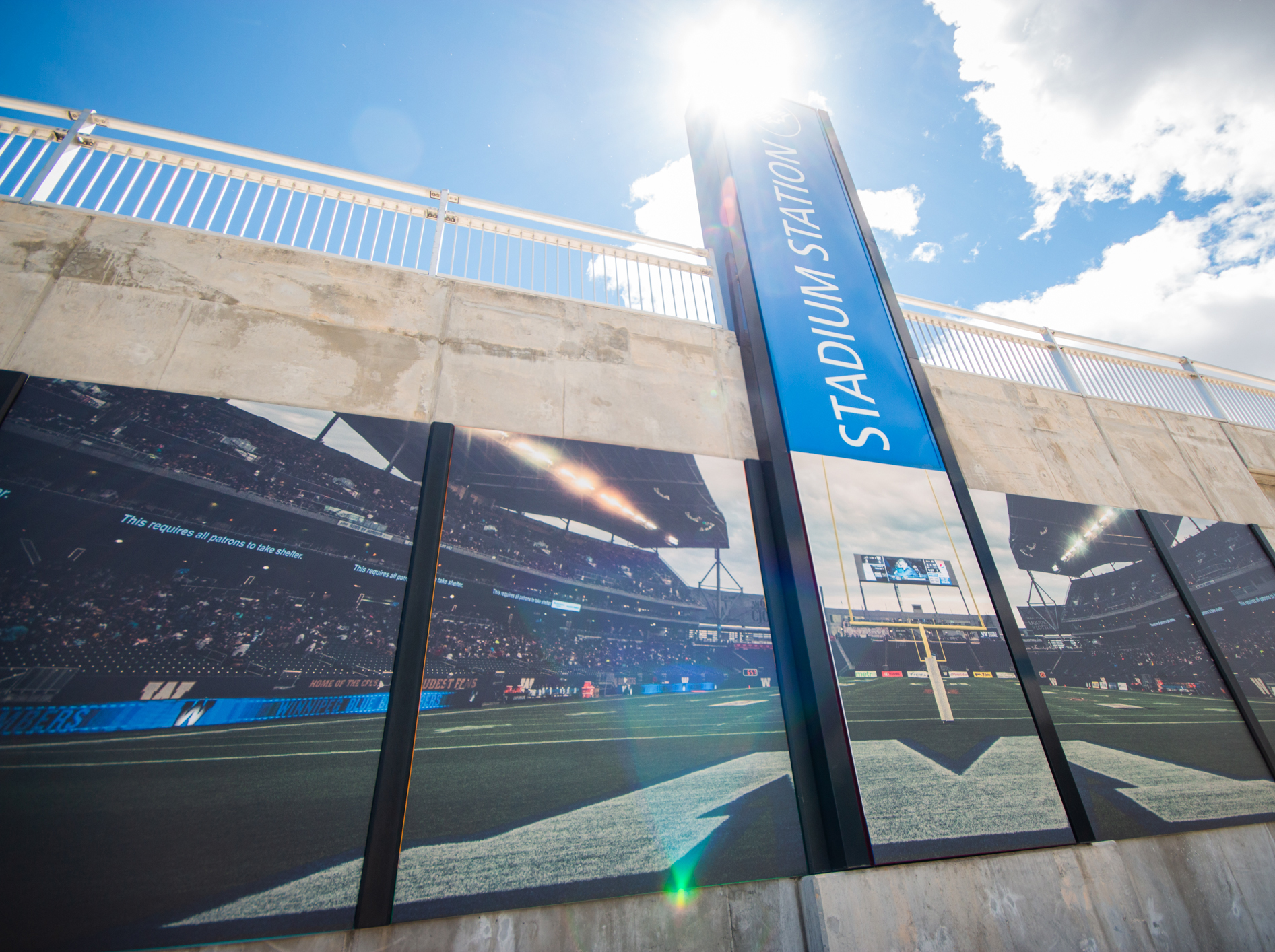 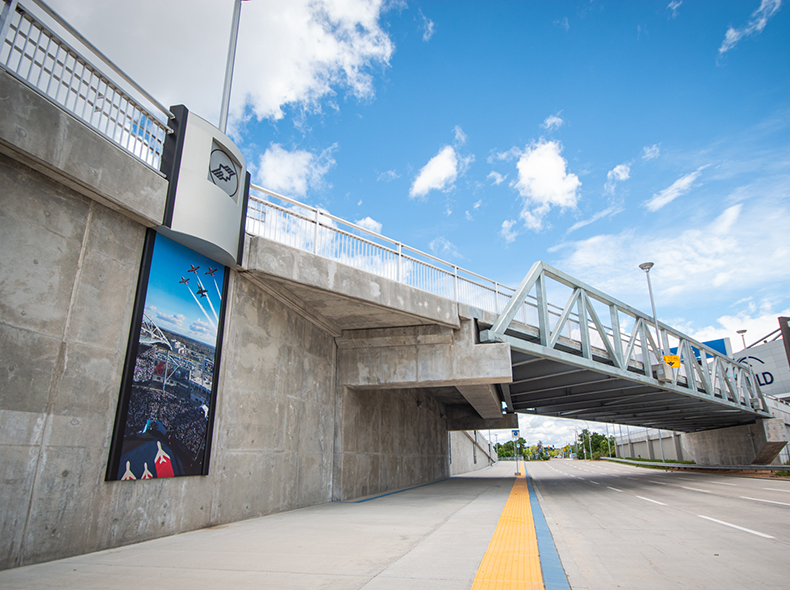 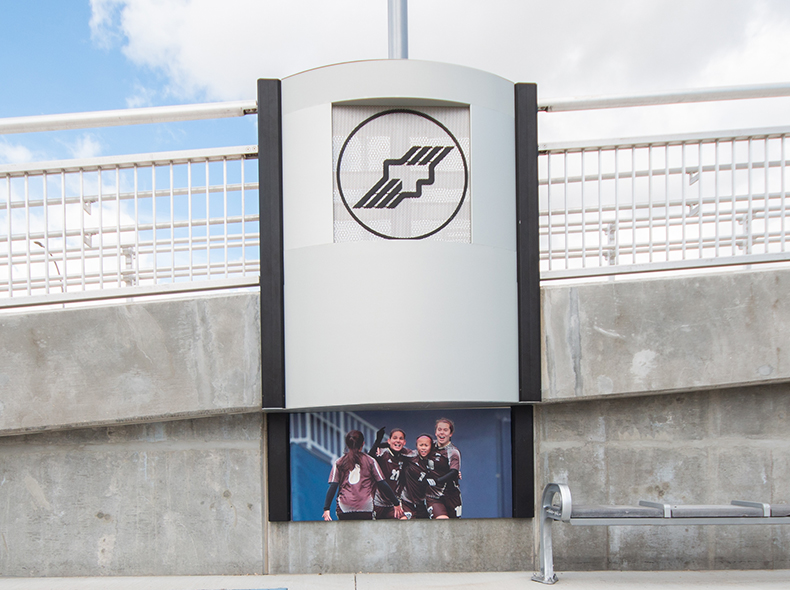 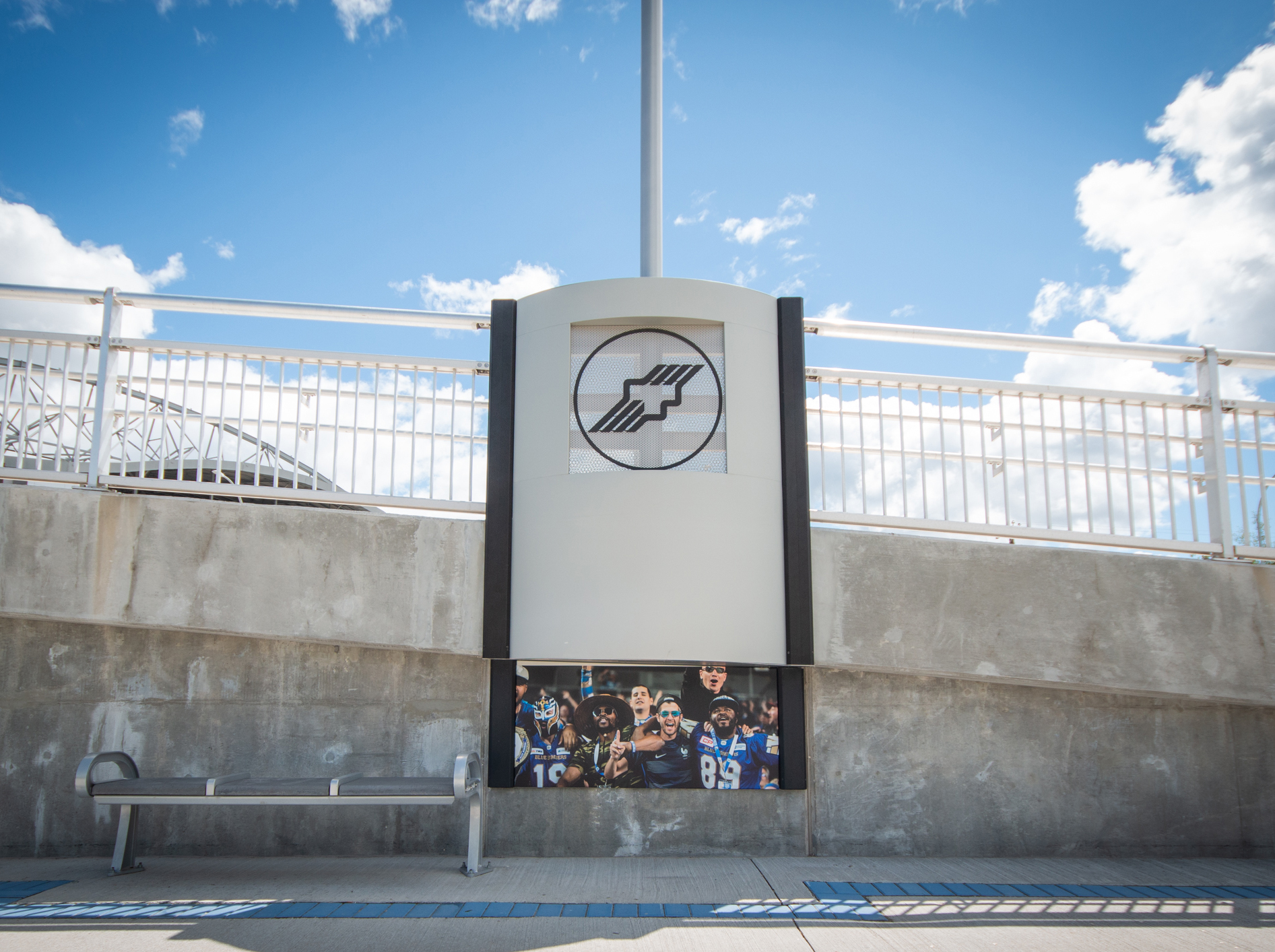 “There are a number of panels of different size and orientation,” said Crowder. “So, using sports as a theme, we were able to tap into the variety of events that occur at IG Field, from the NHL Heritage Classic, to the University of Manitoba Bisons, to the Winnipeg Blue Bombers and others.”

As part of the Southwest Transitway project, Winnipeg Transit installed images that may be familiar to sports fans in the city, with the images all generously donated by the Winnipeg Blue Bombers, True North Sports and Entertainment, and the University of Manitoba.

Other City Information Transportation and Streets