Parents name baby after paramedic who helped in delivery

WFPS assist in an average of 24 births a year

Having her baby in the basement of her house was not a part of Amanda McDermid’s birth plan, however baby Abigail had a different idea.

“I stayed at home until my contractions were close enough to go to the hospital and they sent us home thinking you probably won’t have the baby today, go home and have some rest,” said Amanda.

“We came home and came down to the basement here and things just progressed, so I called out to my husband ‘call 911, this baby is coming’.”

Her husband, Adam, called 911 and the operator gave him instructions on how to prepare Amanda to give birth in their home.

“I got towels and I think he said a shoelace and a bobby pin,” he said. “I was scouring the house for all this stuff and he was coaching me through it.”

When the Winnipeg Fire Paramedic Service (WFPS) crew arrived, they quickly took control of the situation in a way that comforted the McDermids.

“It was a blur of activity,” said Amanda. “They got me hooked up on IV so quickly.”

This wasn’t the first home delivery for paramedics Stefane and Abby-Gail. It also isn’t an uncommon call for 911 to receive. In 2018, WFPS first responders delivered 28 babies with the three year annual average being roughly 24.

“When we got there (to the McDermids) we realized birth was imminent,” said Abby-Gail.

“From there we did all the steps we had to do to make sure mom and baby are taken care of.”

The McDermids had been considering naming their baby with something that started with the letter A. After she was born, it didn’t take long to decide what her name was going to be.

“We named our daughter after our paramedic,” said Amanda.

“We were very scared and Abby-Gail was so calm. She sat down beside me and she was ready to deliver the baby.”

Amanda is employed by the City of Winnipeg in Human Resource Services. She said she understands the importance of effective communication while at work and was pleased to have experienced first-hand the great communication and leadership skills of the paramedic team.

Following the complication-free delivery, the paramedics transported Amanda and baby Abigail to hospital. The care they provided has left a lasting impression on the family. 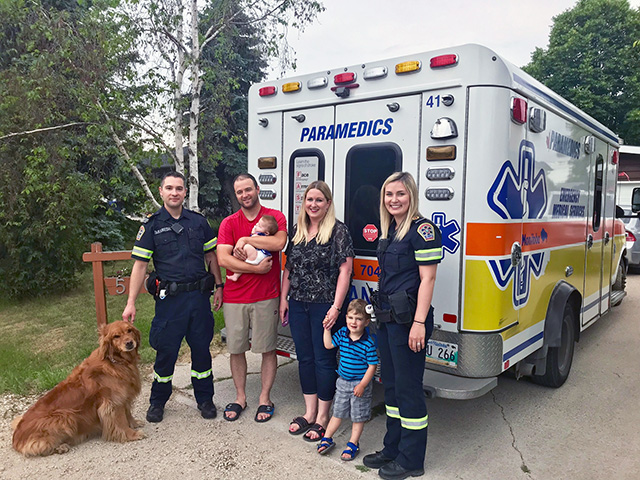 The family had the opportunity to thank the paramedic team in person.

“They were just amazing,” said Amanda. “The support and service we received helped make such a traumatic experience such a positive one and we are forever grateful of the service that we received from everyone that was here.”