Traps are collected and counted at least three day a week

Keeping track of how many tiny mosquitoes there are in Winnipeg may seem like a challenge, but with the help of a little bit of light, the City’s Insect Control Branch can monitor the pesky insect.

“We use a network of more than 35 New Jersey Light Traps in and around the city,” said David Wade, Surveillance Program Coordinator.

“These traps use light to attract insects which are then sucked down into a collection jar.”

The traps are located in the same spots every year and run 24 hours a day from the beginning of May to the end of September. The contents of the collection jars are then brought inside to be counted at least three times a week.

In addition to attracting mosquitoes, other insects including moths can also be caught in the traps. Employees carefully sort through all the insects focusing on isolating mosquitoes.

“It is important to accurately identify the species as not all mosquitoes bite people.”

The most common type of mosquito, aedes vexans, makes up 95 per cent of the adult mosquitoes collected in the traps.  Wade said the eggs of this species hatch after a summer rain. Other species found include the cattail mosquito, culex tarsalis, and culex restuans.

“Data from these traps are used to evaluate the success of the mosquito larviciding program and the effectiveness of a fogging program,” said Wade.

Trap counts are then posted on the City’s Insect Control website. 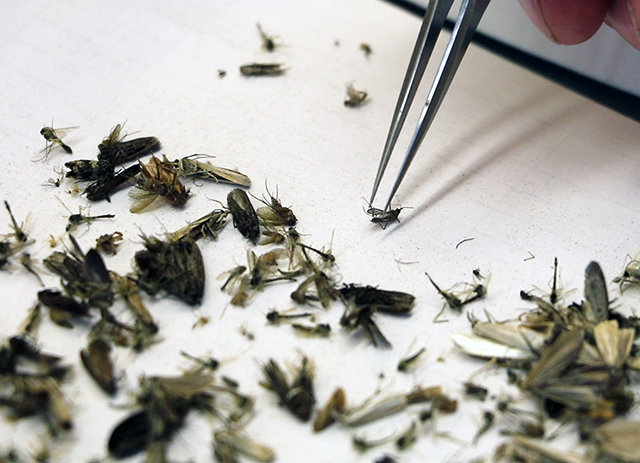 The trapped insects are then counted by hand.

The AFA is used to determine when mosquito control, or fogging, is required. As outlined in the Adult Mosquito Control Policy, fogging is considered when the AFA is high.

During a fogging program, the Insect Management Areas scheduled for fogging are announced at least 8 hours in advance. Fogging will then occur daily from 9:30 p.m. to 6:30 a.m. weather permitting until the program concludes. The City controls adult mosquitoes along streets and lanes, City parks, golf courses, cemeteries, and rights-of-way within the City boundaries using DeltaGard for ultralow volume applications.