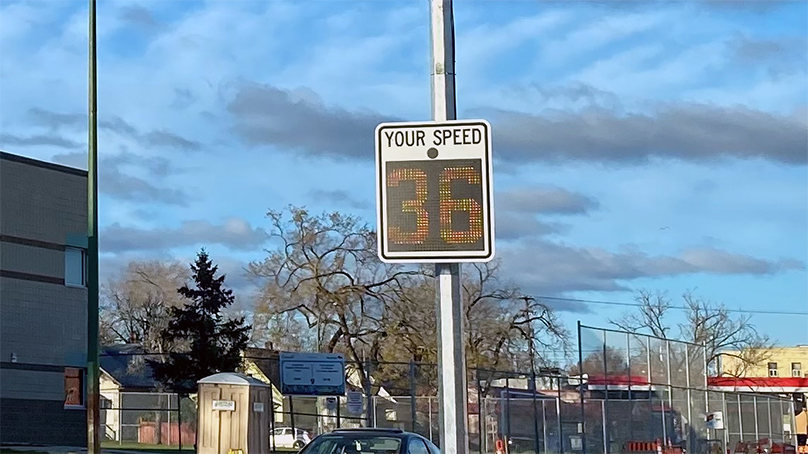 We have received four roadside speed displays from MPI as part of a three-year program targeting areas with speed issues. The speed display devices, also known as speed reader boards, are interactive signs that measure the speed of oncoming vehicles and displays a “SLOW DOWN” message if any are travelling above the posted speed.

Though being placed at areas with speeding issues, the displays aren’t aiming to increase ticketing efforts. Quite the contrary, in fact. “The devices are actually proven to be effective in reducing average speeds at their location,” said David Patman, Manager of Transportation. “If we can remind motorists of the posted speed, many will then travel at that speed, which will help make the streets safer for all Winnipeggers.”

This type of device is already in place at numerous locations throughout Winnipeg. The four new locations were selected based on traffic analysis, safety review, speed data, and enforcement statistics.

“The pilot radar speed boards are part of our broader commitment to improving safety on Winnipeg roads.”

Patman said this initiative shows the value in partnerships, and our commitment to work together with MPI to make roads safer.

“These signs are just one traffic calming measure we have in our toolbox,” said Patman. “The educational nature of them makes them an effective, inexpensive and labour un-intensive option for us to hopefully make a big impact.”

Though the speed display signs are only at a handful of locations, motorists are reminded to be mindful of their speed whenever on the road and to adhere to the speed limits.

“These displays are simply a gentle reminder for motorists to slow down and drive safely at all times,” said Patman.

In installing the devices, we followed the Transportation Association of Canada Application Guidelines for Speed Display Devices (2017), and information on their effectiveness will be included as part of the quarterly verbal updates to Council on the road safety strategy.

Emergency and Safety Transportation and Streets